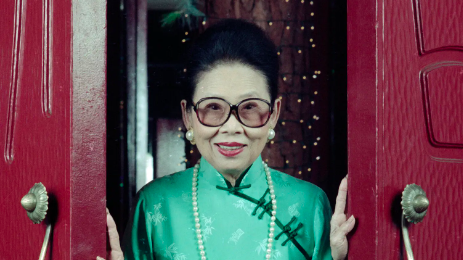 “Kinetic, profound, and always strategic” according to Tejal Rao of the New York Times, Sylvia Wu passed away in October, but not before hosting the Hollywood glitterati for five decades at Madame Wu. Photo by Bob Riha Jr./Getty Images.

Consider the Chinese chicken salad. Allegedly created for Cary Grant by Sylvia Wu five decades ago, the salad is now a staple in chain restaurants across the United States. Wu passed away last October at the age of 106. New York Times California restaurant critic Tejal Rao explains that disappointed by the offerings at Chinese American restaurants, Wu opened her own place with $10,000 invested by her skeptical husband.

Madame Wu in Santa Monica was inspired by the restaurants Sylvia enjoyed patronizing with her mother-in-law in Hong Kong. Differing from the chop suey houses sprinkled across Los Angeles at the time, her restaurant was a bit flashier and lively, says Rao. With waterfalls and luxurious Chinese art, the 11,000 square foot space hosted celebrities and the Hollywood elite, serving a “lower fat” Peking duck to lure diners into other dishes like winter melon soup and mapo tofu.

Amid news that he is again shifting concepts at Noma, René Redzepi discusses the restaurant’s reinvention.

“The Woks of Life” documents the Leung family’s history through food.

Sylvia Wu brought an Angeleno sensibility to Chinese food, expanding the cuisine and its fanbase. Tejal Rao explains her impact and legacy.

‘Ottolenghify’ing in the kitchen for extra good results

Chef Zarah Khan culls carrots at the farmer’s market for a new dish at Rustic Canyon.

From a garage pop-up to a brick and mortar in Melrose Hill, Bill Addison reviews Filipino favorite, Kuya Lord.