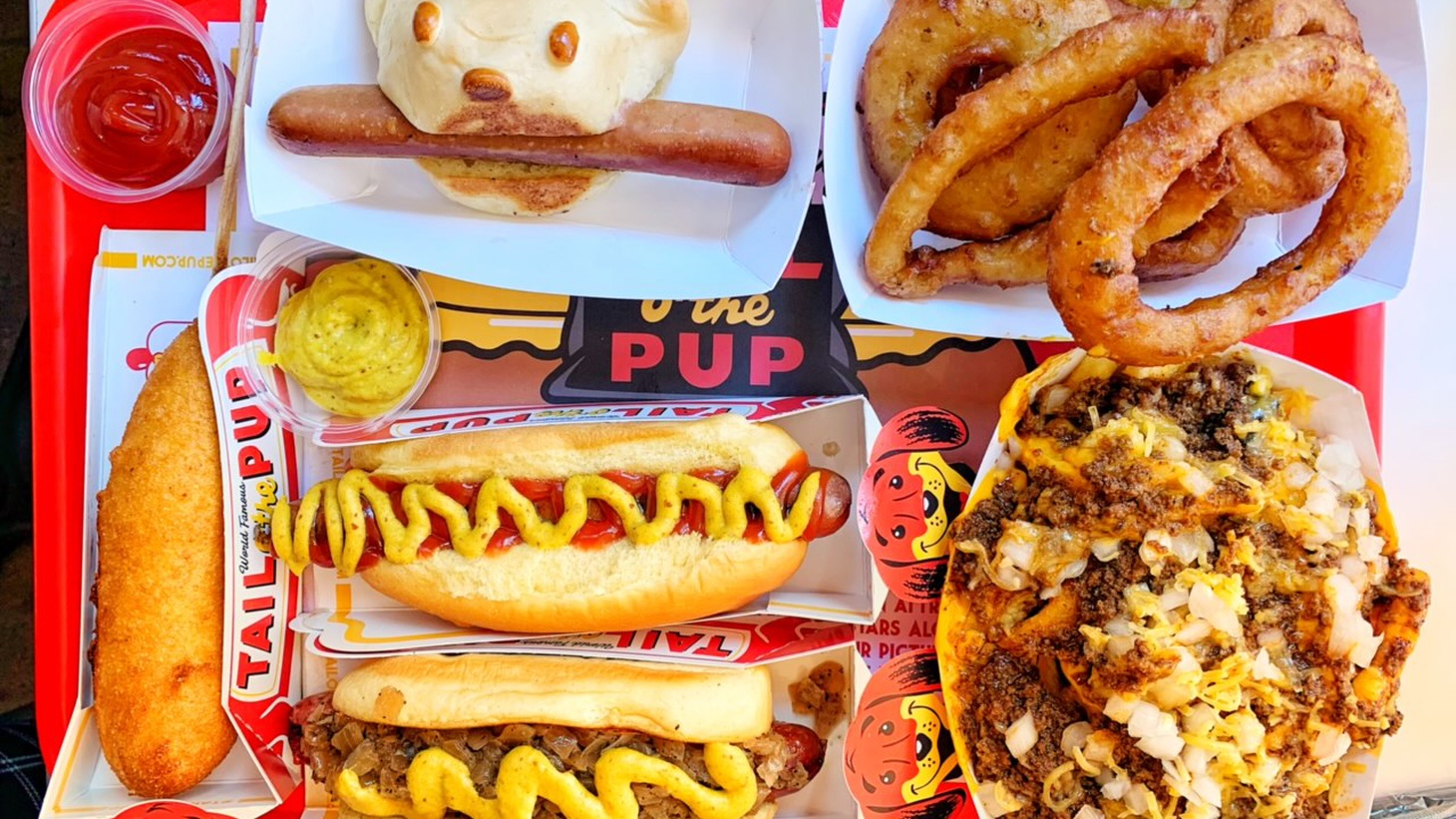 Chili fries, corn dogs, onion rings, and the 1946 Pup, an homage to the original split hot dog, are just a few items on the Tail O’ the Pup menu that “will make you smile.” Photo by Elina Shatkin/KCRW

Bobby Green led the renovation of the Tail O’ the Pup hot dog stand which reopened in July. Drive down West Hollywood's main drag and you won't miss it. It's the 18-foot-long hotdog-shaped building near the corner of Santa Monica and La Cienega boulevards.

When Green heard there might be a chance to revive the famous hotdog stand, he bid into the opportunity as a partner in the 1933 group. He has a knack for restoring historic venues all around Los Angeles. His projects include Highland Park bowl, the Formosa Cafe, and the Idle Hour in North Hollywood shaped like a giant barrel.

KCRW: Tell me about Tail O’ the Pup.

[This is the Tail O’ the Pup’s] fourth location since 1946. It originally was La Cienega Beverly, then they built the Sofitel Hotel. So it had to move around the corner to San Vincente, which had moved twice. And then sadly 2005, it lost its lease and the family put it in storage in hopes of finding a new location. And unfortunately, they passed away before they could find a location. It lingered in storage. For many years, I had some friends in the preservation world that found it, and documented it, and we kept in touch with the children of the family that inherited the dog. Finally, after many years, we got together and worked to make a deal with them. Because their goal was to really see it come back to life and fulfill the dreams of their dad and grandfather. And that was our goal today.

Having grown up in LA, these kinds of buildings were so indelibly part of my childhood. Even if you weren't going to one as a destination, just driving by makes me happy. Every time I see Randy’s Donuts, it makes me happy.

Exactly. I was a child of the 1980s. So I was driving in the 1980s. And I remember when this architect put the giant ballerina dancer with a clown head on. I mean, that was just so thrilling, and even the giant binoculars in Venice was thrilling. You had the Cadillac building on Ventura. It just added this excitement to the city. It made you drive around LA and realize ‘I'm in a unique city, unlike anywhere else in the country. This is special.

We wanted to pay homage to not only the years that the Tail O’ the Pup was open, but the owners at that time that brought their own individuality to it. So we did a deep dive on the menu that started in 1946, and ran through the early 1970s. We did photo research. You could see people holding the dogs from the 1940s, and you could tell that they were all split and grilled. That was up until 1976.

When the Blakes took it over, they kind of streamlined it and made it faster. So their buns were just the classic steam with a light grill, but not splits, and the buns were not grilled. So we wanted to show people the differences.

Aside from being split and grilled, the original dog has grilled onions and mustard. That’s it. That’s very modern.

You'd think it is. But that's exactly the dog that they made. We make our own mustard with apple cider vinegar. So it adds kind of a different deeper dimension to it. It still tastes like a classic yellow, but there's something more going on there. And of course, the 1976 dog is just your classic ketchup-mustard. 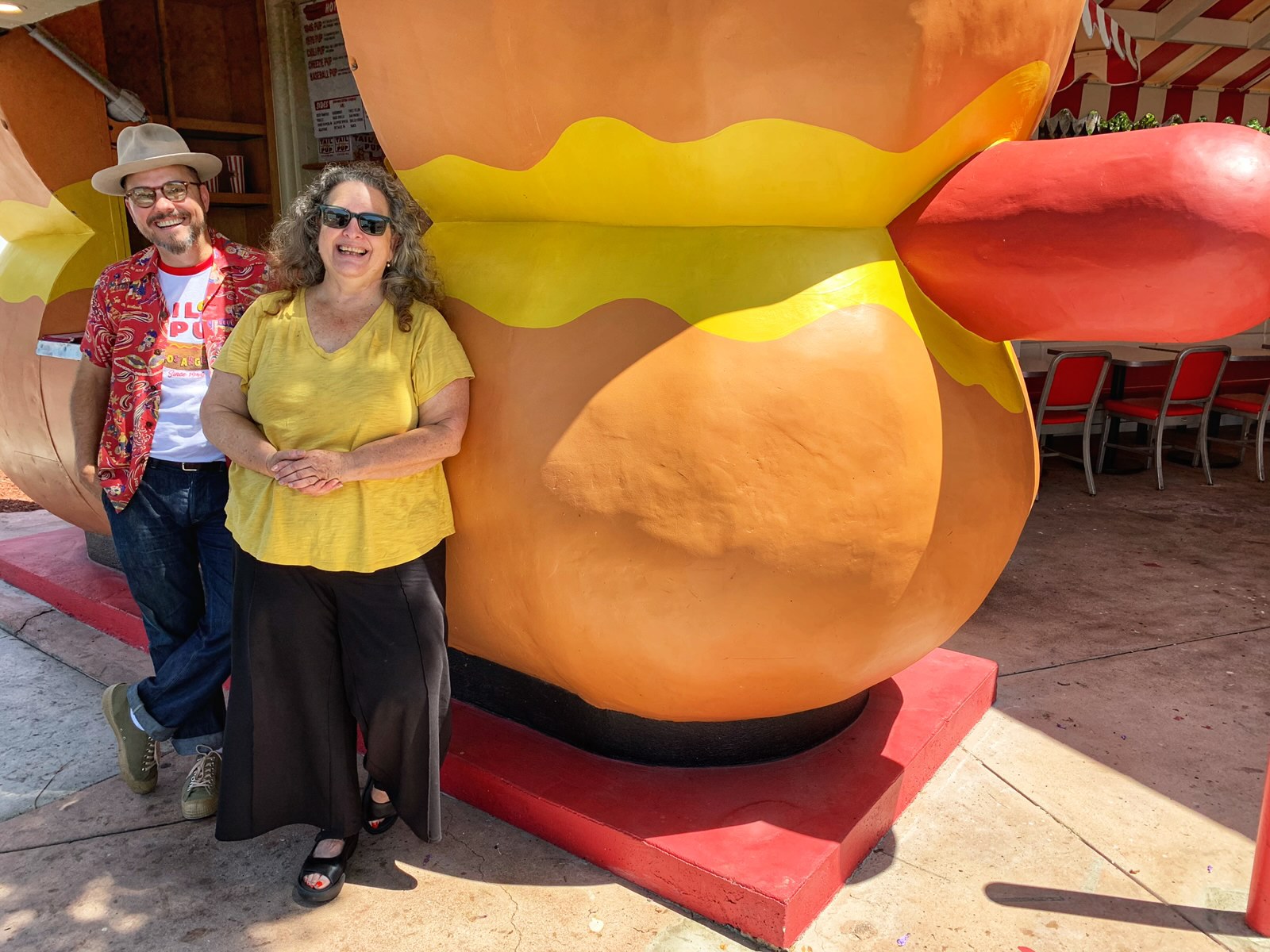 You also have a corn dog, which looks pretty fabulous.

So Tail O’ the Pup never had a corndog, and I love a good corn dog. The only places I've ever been able to find them are either Disneyland on Main Street, or the county fair. And so that was my addition. I said we have to have an amazing corn dog. And it's really, really good. And here's the kicker: My partner's wife is gluten-intolerant. So he said, ‘Can we make it gluten free?’ And I said, ‘Let's try it.’ And so we spent several months trying with lots of failures. And so we landed on this one, which contains no wheat, no gluten, and it's even better because it has more corn meal. You're getting more of what a corn dog should be.

Tell me about the dogs themselves.

The dogs themselves have been a two-plus year journey. It started off just sampling every dog available in the United States. To me it would have to be the snap, and it had to be the flavor. [They had to be] all-beef. LA is not a pork town. But it's a hot dog town. You know, California alone consumes more hot dogs per capita than any other state in America. So I spent years and years and years researching and developing. So we now have a producer who makes this dog just for us. In my opinion, It's got more snap and more hotdog flavor than anything else I've tasted on the West Coast at all.

Do you have vegan options?

We did not want to turn anyone away from The Pup. The same reason we developed this cute puppy dog bun for kids, we also developed a great vegetable-based dog. It’s not soy-based, but veggie-based. Everyone I've spoken with that is vegan loves it.

Do you have anything for actual dogs?

Not only do we love dogs, we make food for dogs. So we have a doggy dog. And we have a doggy beer. We got this great doggy bacon-flavored cheese spread, and we put that on the hot dog. And we serve a skinless dog because it's easier for the dogs to eat 100% beef, and dogs go crazy for it. And the doggy beer is fantastic because it has like glucosamine and beef broth. So it's all this stuff that's good for the dog, so you can have a beer and then your dog can have a beer. It's a win-win.

What condition was the actual building in when you dragged it out of storage?

It was probably the worst it's been ever since it was brand new in 1946. They hired architect Milton Black, who was pretty well known for doing streamlined, modern style back in the day. He designed the dog, and built it very well. It’s mostly made of metal, believe it or not. Only the ends are wood and stucco – the tails of the pup. The most damage it suffered was in storage. It was in Torrance in a big storage building, and they had to move it several times. So when we got it, the ends where the stucco and would meet the metal were cracking and falling apart. So we had to fix that. First off, we had to go in there and reinforce the wood. And then a lot of the metal was kind of rusted over the years. So we had to reinforce the metal. The only major thing was the door itself – the door that opens in the side of the hotdog.

Why is there a picture of Jim Morrison by the bathroom?

Yeah, and he's holding a hot dog. Not only is this building historic because of Tail O’ the Pup, but this was The Doors’ recording studio in 1970, and it was their office. They recorded “LA Woman” here. Jim Morrison liked the way the tile echo sounded [in the bathroom]. So he's singing all the vocals to “LA Woman” in this bathroom. Then they ran the cables upstairs and he recorded everything else upstairs. So we paid homage to Jim.

Mom’s casserole dish, a soup pot, or skillet: One isn’t the loneliest number

Cookbook author Melissa Clark reaches for a single pot or pan to create entire meals in one fell swoop.

When Bobby Green heard there might be a chance to revive the popular Tail O’ the Pup hot dog stand, famous because it was an 18-foot-shack shaped like a giant hot dog, he...

After hitting pause for two years, Irv’s Burgers is open again in West Hollywood with the same doodles on plates and a simplified menu.