Don’t have a frying pan at your cookout? Use wet newspaper, sticks, and string to teach your kids the fun and ease of cooking, suggests Sarah Glover. Her recipe for Fire Salad involves hanging vegetables over an open flame. Photo by Kat Parker.

If you’re a parent eyeing a road trip with your kids this summer, you might find inspiration for your time outdoors through chef and stylist Sarah Glover’s new book, “Wild Child: Adventure Cooking with Kids.”

The cookbook details simple but elegant meals that kids of all ages can help prep and cook around a campfire, inspired by both land and sea. Glover discusses her favorite campground meals and how cooking together outdoors helps bring us back to our roots. 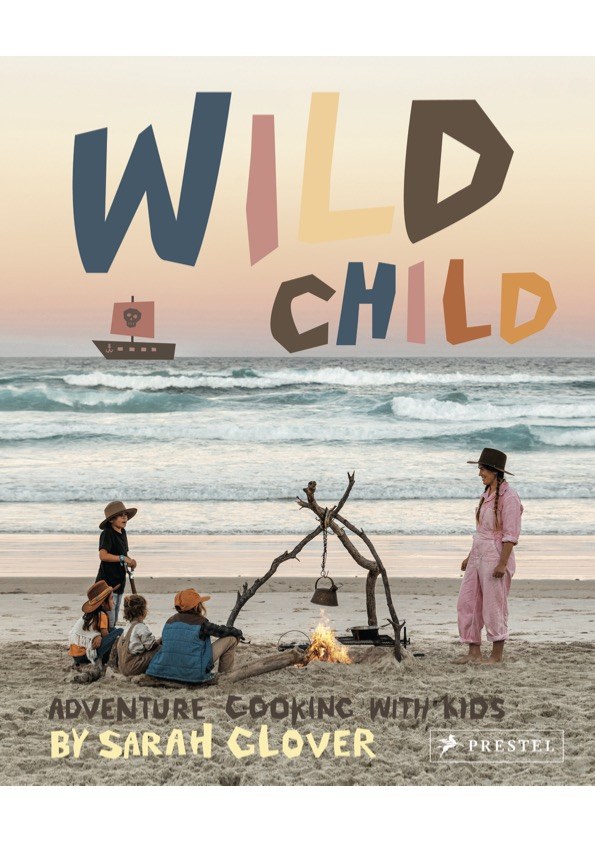 Chef and explorer Sarah Glover says outdoor cooking is about the spirit behind connection with others. Her cookbook is “Wild Child: Adventure Cooking with Kids.” Photo courtesy of Prestel.

KCRW: You grew up in Australia. What impression did your early experiences of the outdoors leave on you?

Sarah Glover: “My early experiences would have been just the freedom that I had as a young child to go outside, explore, hang out with my brothers, and create. It's only since I've been older that tapping into it has made me realize that it was something of great value.”

Does outdoor cooking need to mean camping out of town, or can it just be in the backyard, park, or beach that allows a fire?

“I don't even think it's limited to a fire. I think outdoor cooking could just be a little butane gas burner. It could be a picnic, it could be something you've picked up from the local market. It can translate in so many ways. It's really about the spirit behind it. And I think that that's where you’re connecting — together outside around food.” 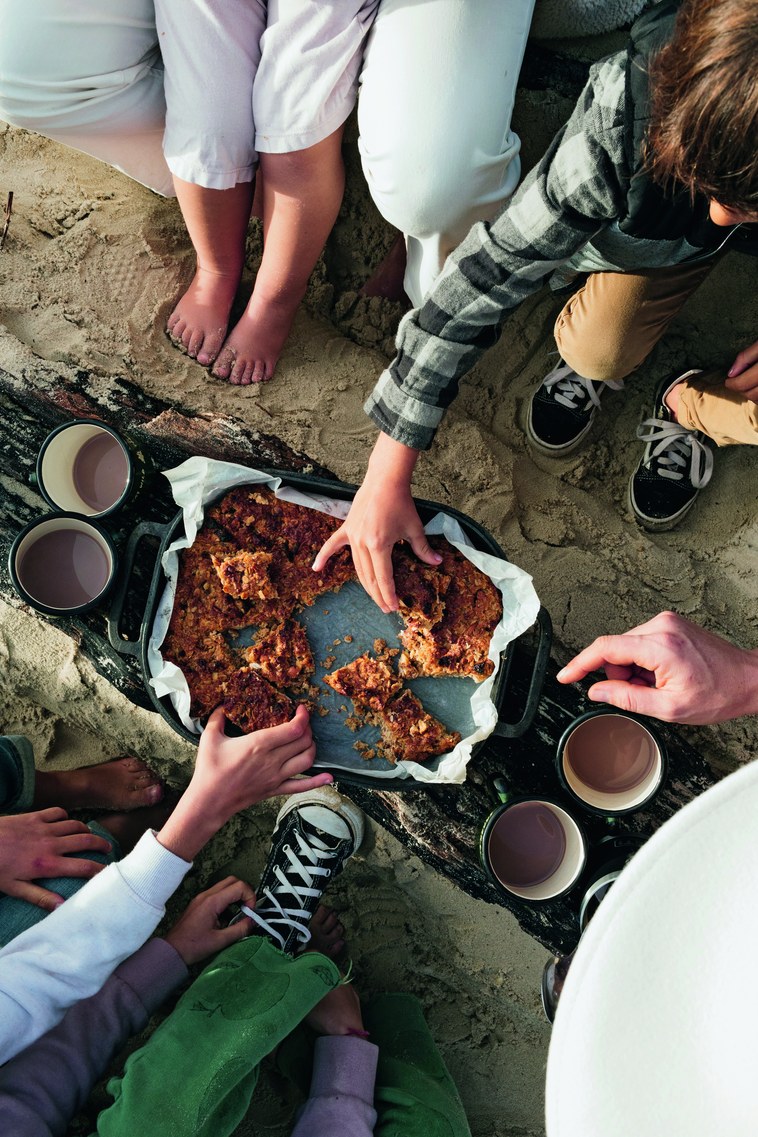 Sarah Glover incorporates baking and breakfast into her camping adventures with kids. Photo by Kat Parker.

What’s a breakfast/lunch idea you can make outdoors?

“One of my favorite recipes out of the book is the grilled papaya. So we have papaw that we've harvested from the tree. And we just put it over the coals of a fire. It’s halved and filled with coconut yogurt and lime juice and some coconut that we've toasted. It’s pretty delicious.”

What is your “fire salad” recipe?

“A lot of the chapters in the book, I really wanted it to be about a whimsical adventure. So it's kind of like you stepping into a child's brain, and you're more or less creating a scene or an adventure that you're going on. And I've tried to do that with the food.

And so we hang vegetables over the fire to cook them. And then we slice them up and turn them into a salad. We actually had kids that were in that shot in the photoshoot for that one, they were quite young. It was a really fun way to teach them about hanging and tying, and [about] vegetables, and also not having to overcomplicate the prepping process of it as well.”

Hanging meat from a string and cooking it over a fire is such an old concept. The meat seems to just turn on its own. Does that happen with the carrots as well?

“It does, surprisingly. The radian heat cooks it. And the nice thing about vegetables is ... it's pretty hard to mess them up. But I also like to get them a bit charred in some areas. And that gives it a lovely flavor. The vegetable doesn't always have to be cooked all the way through.”

What are your favorite ways to cook seafood? I know that you use newspapers, string, and sticks.

“Yeah, there's a few recipes in there. It’s from a chapter called ‘Down to the River,’ and it's where a bunch of young boys head off on an adventure in their boat hoping to catch some fish. And the concept behind it is giving young people tools to be able to cook with just a few things. Like you don't necessarily need a frying pan. You can cook a whole fish on a stick with a string using radiant heat by poking it into the ground by the fire and then eat it. 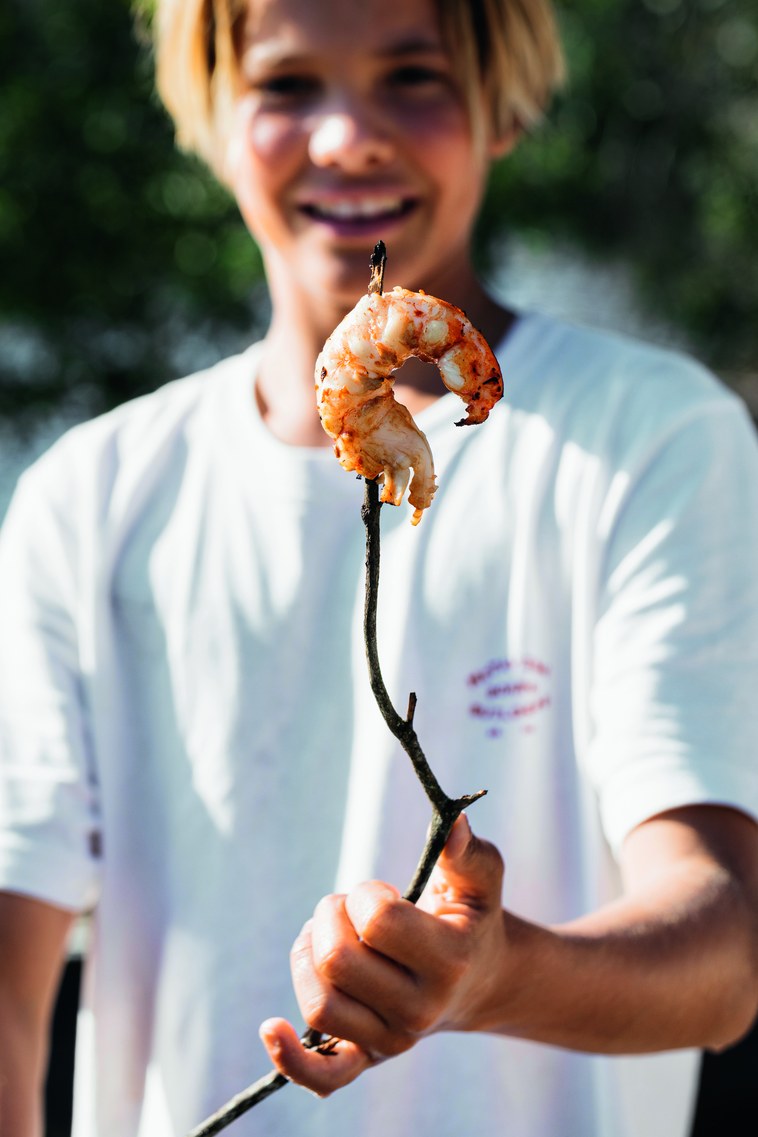 Sticks aren’t just for marshmallows over the fire. Use them for shrimp and other seafood. Photo by Kat Parker.

And then the other concept is that you actually cook a fish in newspaper. So you wet the newspaper, put your fish in, stuff it with some native herbs and different types of things you can forage. … And then you wrap the fish up and pop it on the coals in the fire. And the idea is that the wet paper protects the fish and steams it, a bit like if you were to cook it in paper bark or something like that, which is an old indigenous way of cooking.”

This book is also a reminder to be less rigid in how we approach cooking.

“Absolutely. I think a lot of what I do is about inspiring people to be less rigid about cooking. I think it's become a little bit too overthought. [Through] that whole perfectionism, we've lost why we cook, which a lot of the time is to have community and to break bread together and to have time with one another around food. It's quite a special time of the day.

When you're cooking, you can create those same memories and have that same sense of community because of the way you're interacting together, [like] the way you're catching the fish or you're putting it onto a bit of bamboo and tying it and waiting for it to cook, and then you're eating it together. It’s just sort of anticipation and excitement that builds throughout the process. And then it's fun because you're outside, and it doesn't matter if you drop some crumbs on the ground because an animal will just come by later on and eat it up.”

-You can play around with the root vegetables and choose different varieties to hang over the fire. I love watching them swing over the flames, as their delicious cooking smells waft around the campsite.
-Light your fire and let it burn down for about 1 hour, or until you obtain a medium heat. Build a tripod over the top.
-String the vegetables up using butcher’s string or garden wire. Hang the beets over the fire, using the tripod, and cook for 1 hour, then hang the carrots and onions, and cook with the beets for another 2 to 3 hours, or until tender.
-Meanwhile, make the dressing: Combine the balsamic vinegar, garlic, and thyme in a saucepan and bring to a boil over the fire on a grill.
-Continue boiling for about 15 minutes, or until the strong vinegar flavor mellows and the mixture is reduced by half.
-Let cool then strain into a bottle.
-Whisk in the olive oil and season with salt and pepper.
-Peel the veggies and slice. Arrange on a plate with the salad leaves. Drizzle with some of the balsamic dressing, finish with a generous grating of cheese, and serve.
-Reserve remaining dressing for another meal.

Continuing the odyssey for barbacoa with Bill Esparza

Translating the land into flavors in Santa Barbara wine country

Santa Barbara wineries tend to be small compared to others in California, says wine writer Matt Kettmann. The agrarian culture has been preserved in the area where the...

London toasts and Normandy seafood: Cooking meals to get away

Cabin fever got the better of many people over the last year. Chef Renee Erickson revisits her favorite destinations in her latest cookbook, “ Getaway .”

If you’re a parent eyeing a road trip with your kids this summer, you might find inspiration for your time outdoors through chef and stylist Sarah Glover’s new book, “Wild...

Lend me your ears: Summer corn has hit the farmer’s market

Corn has finally appeared at the farmer’s market.