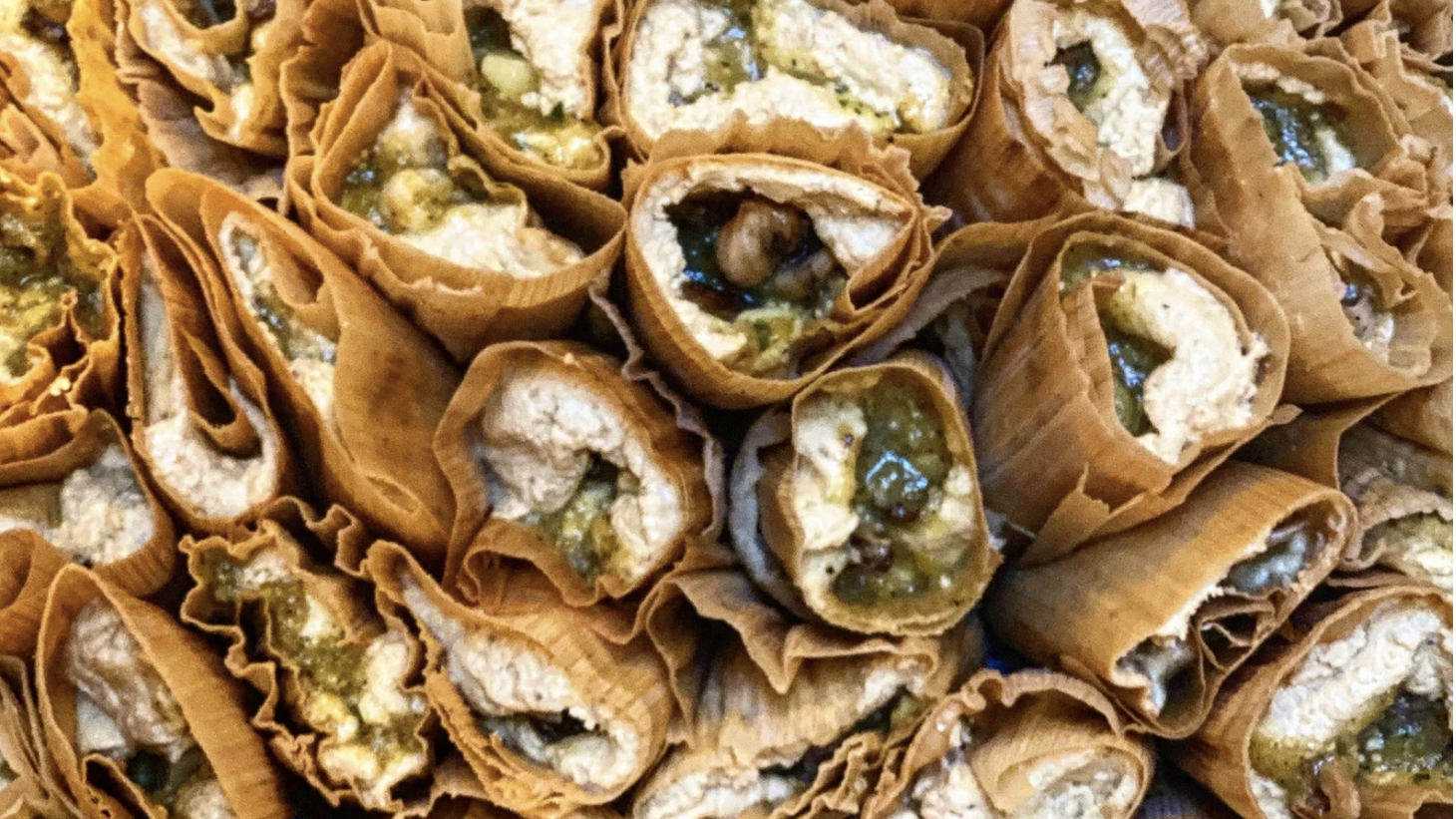 Vegan tamales with fillings from jackfruit “pibil” to mushroom and gold potato are featured at Alchemy Organica’s popup in LA’s Koreatown. Photo courtesy of Alchemy Organica.

As soon as Thanksgiving is over, my mind starts to turn from turkey toward tamales, the beloved packet of masa dough, lovingly mixed, spread on corn husks or banana leaves filled with a stew-like concoction, bundled and steamed. I love them all year-round, but get especially seduced in the run-up to Christmas Eve pre-order mania. In Southern California, the choice is prodigious as regional variations are available from Mexico, Central America, and South America, each with their own character.

For some highlights I turned to some of my favorite people who have depth of knowledge in the area: Bill Esparza, a guest on Good Food for over 10 years who’s currently writing for Eater LA, where he compiled “22 Essential Tamales in Los Angeles;” Javier Cabral, editor in chief of LA Taco and associate producer of Taco Chronicles; KCRW contributor and LA Times Columnist Gustavo Arellano; and Claudia Serrato, culinary anthropologist who studies North and Mesoamerican foodways, who was part of Good Food’s masa show. Bill and Javier each shared three picks from their extensive coverage. Gustavo recommended one wild tamal. And Claudia gives us a vegan suggestion. I chime in too.

Outside the Masa
Indio

-When I reached out to Gustavo for his pick, he responded, “Let’s carpool out to Indio right now!” Our destination: Outside the Masa food truck for their loaded corn tamal, split open and topped with birria de res “enlivened with a ferocious salsa de chile de árbol, and warming consommé on the side that you can either drizzle on the tamale or drink as a magnificent chaser.” Owner Juan Carlos Barajas is the culinary director of the Indio International Tamale Festival. 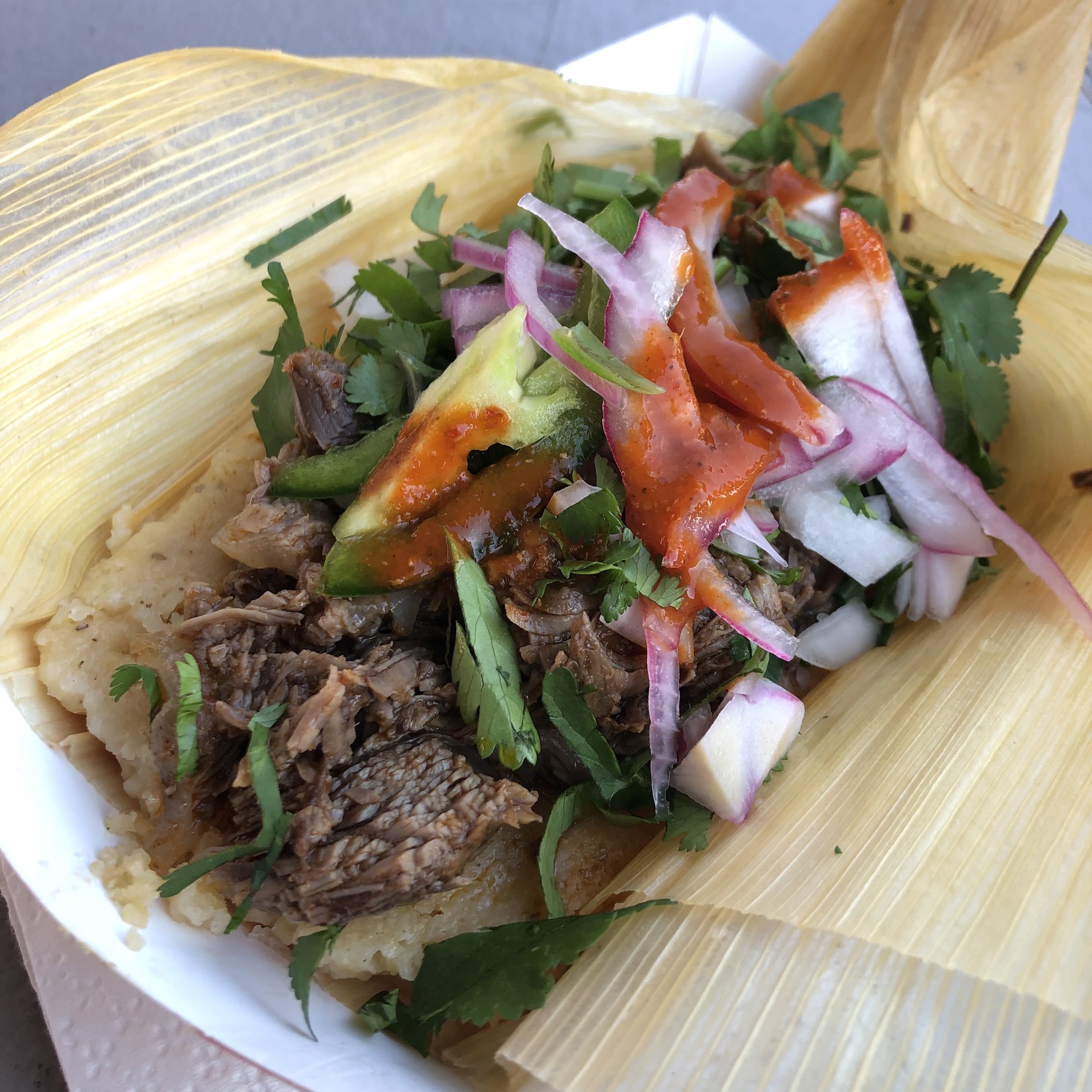 This is the loaded tamal topped with birria de res from Outside the Masa food truck in Indio, CA. Photo by Gustavo Arellano.

-These are corn husk tamales made from Zacualpan, Nayarit, Mexico, the hometown of Maria Luisa Esparza, the woman behind Rosy’s. Choices are chicken in red sauce with sliced vegetables or chicken in green sauce made with jalapeños. There is also a tamal of sweet corn and cheese. Call (818) 834-6948 for info and orders. 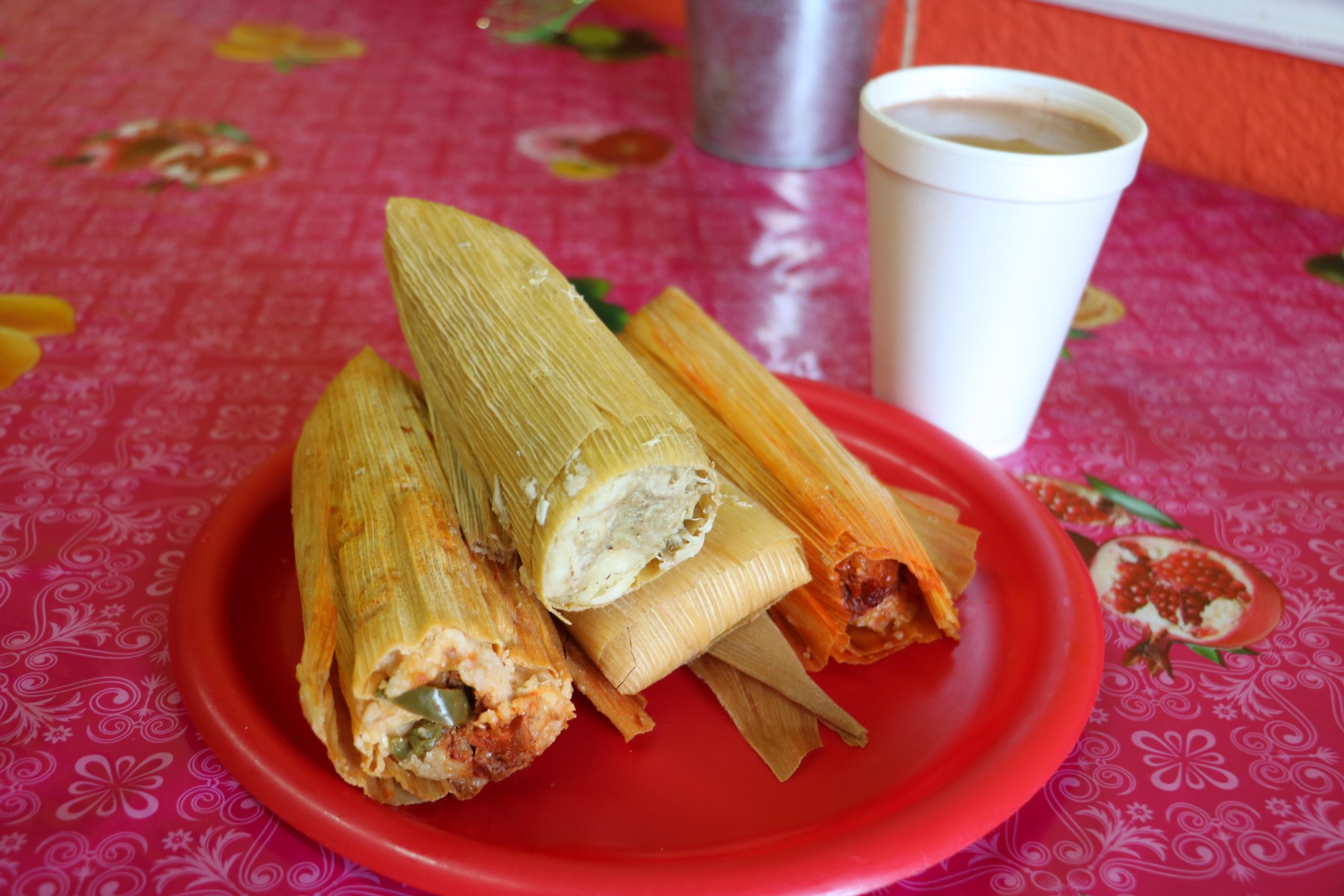 The corn husk-wrapped tamales from Zacualpan, Nayarit are a specialty at Rosy’s in Pacoima. Photo by Bill Esparza.

Sazon Costeño
Norwalk, with delivery available depending on the size of your order.

-These tamales are made from Oaxacan recipes of Melquiades and Elizabeth Silva. They make a rarely seen type of tamal from Pinotepa Nacional in the Costa region of Oaxaca. There’s a $5 delivery fee within 10 miles of Norwalk, and $10 beyond 10 miles in the Los Angeles area. These are family recipes and include chicken in a spicy mole, a milder pollo en chile guajillo, rajas con queso, pollo en salsa verde, and puerco en chileajo, which is a guiso of spicy chile costeño, tomatoes, and garlic. All tamales come wrapped in banana leaves, with a cost of $30 for a dozen. They’re a unique taste of regional Oaxacan tamales in Los Angeles. Call  (562) 503-1499 to place an order and get more information.

-Ramon and Andrea Martinez, a Honduran-Mexican couple, sell tamales at their restaurant and from a car trunk in a Home Depot parking lot in Long Beach. Using moist, lard-based masa made from freshly nixtamalized corn, they offer five choices, pork or chicken in either red or green salsa, as well as one made with cheese and jalapeño slices.

-Like the rest of their menu, Chichen Itza’s tamales are inspired by recipes from the Yucatan. The vaporcito is a thin tender tamal made with a choice of proteins and filled with cochinita pibil, steamed in banana leaves and topped with pickled red onions. The tamal horneado (oven-baked tamal) has a crunchy exterior and is filled with achiote seasoned chicken, hard-cooked eggs, and sliced tomatoes. 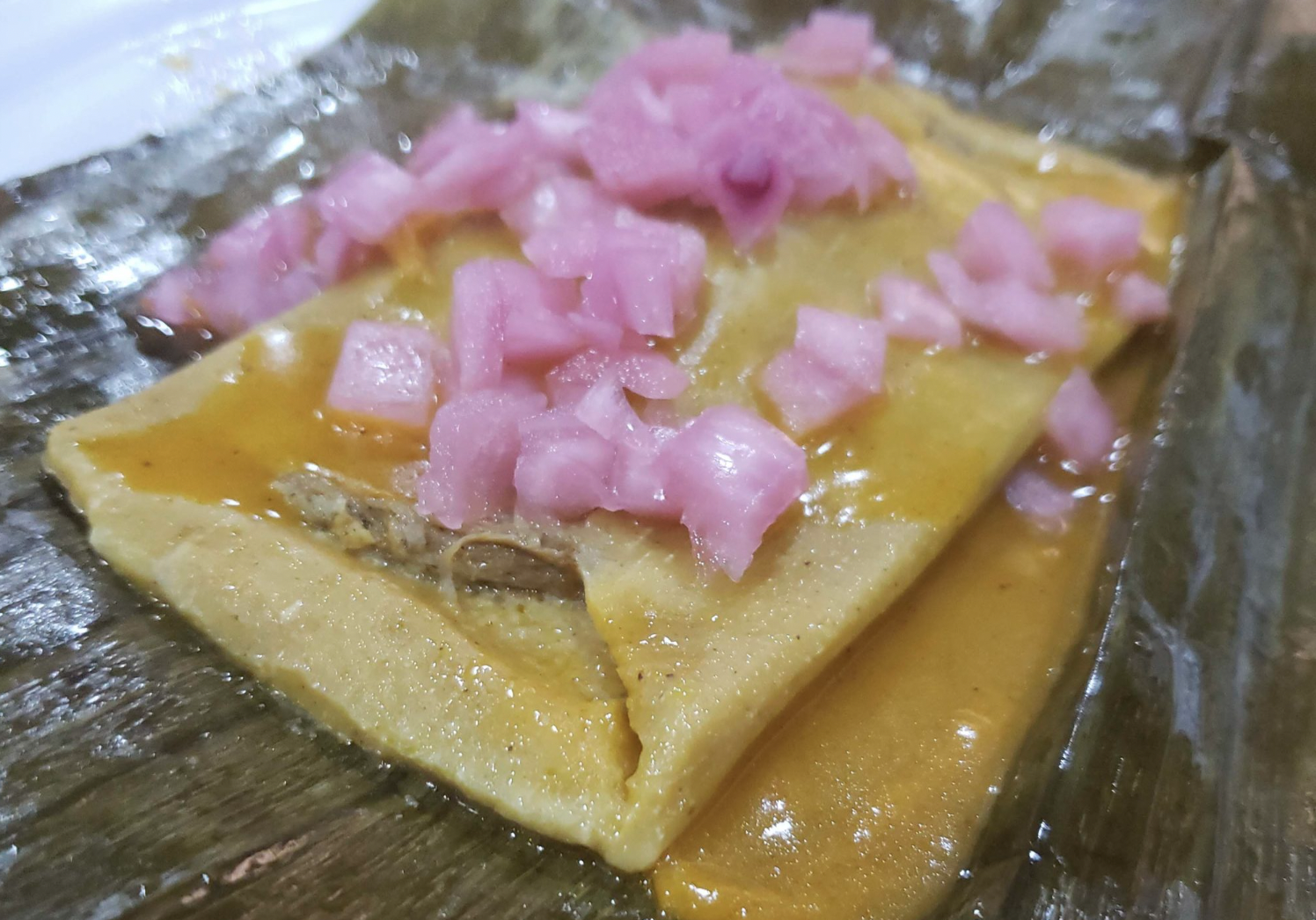 -Vegan chef Denise Vallego is making vegan tamales for pickup on December 20. Wrapped in corn husks and made with masa from Kernel of Truth tortilleria, your choices are Jackfruit cooked in a red chili salsa with green olive an potato, or mixed organic mushrooms, herbs, and gold potato in salsa verde. Or Yucatán-style banana wrapped Jackfruit “pibil” slow roasted jackfruit “pork” filled tamales steamed in aromatic banana leaves. They also have sweet pineapple-coconut tamales. If you want to make your own tamales but would like someone else to prepare the masa, you may pick up their vegan Masa Preparada (tamale dough already premixed and seasoned) on December 23 by appointment only. Pre-orders for tamales and masa are a must.

-I love the tamales that Chef Loreta Ruiz makes, especially El Enamorado, a white-corn masa tamal filled with house-made cashew cream and salsa casera. This was one of the dishes that showed me that I could enjoy vegan tamales as much as the porkier variety. She has a large offering though, including cheese and jalapeño, mushrooms in guajillo sauce, black bean and mole, nopales in salsa verde, and a chocolate-almond bundle I’d love to try. But the Green Parrot has to be the most original with masa naturally colored and flavored with poblano chili stuffed with diced potatoes, peas, and carrots in a tomato sauce. It’s Inspired by the green parrots in downtown Santa Ana. 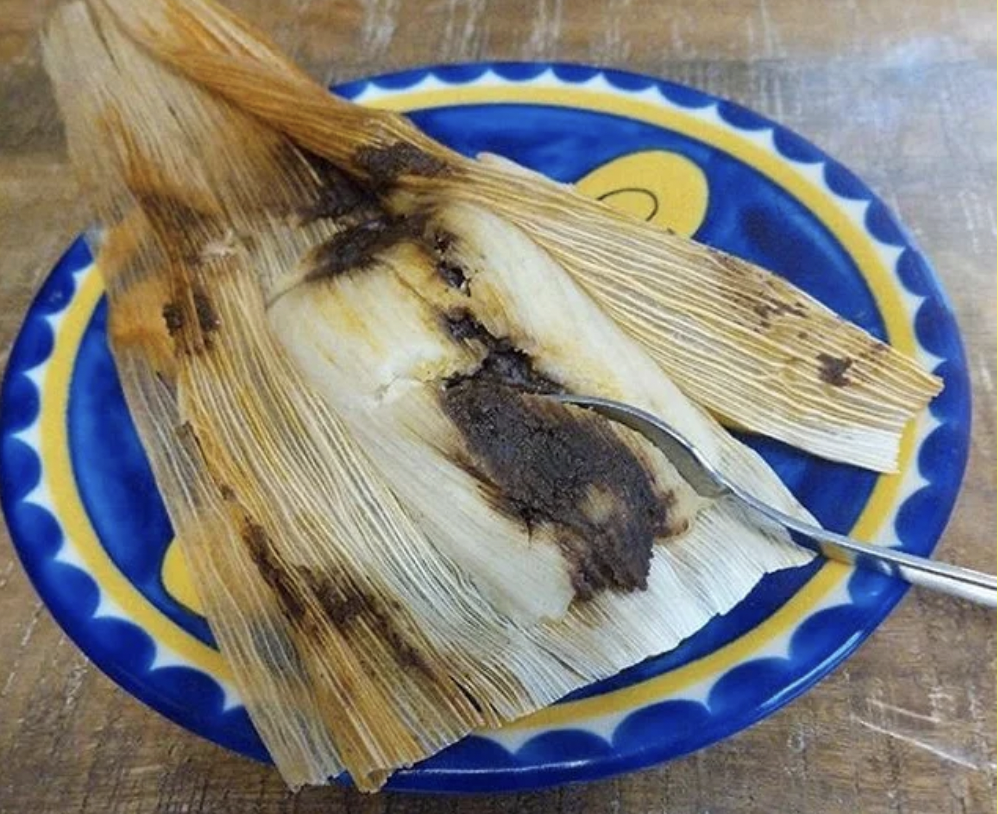