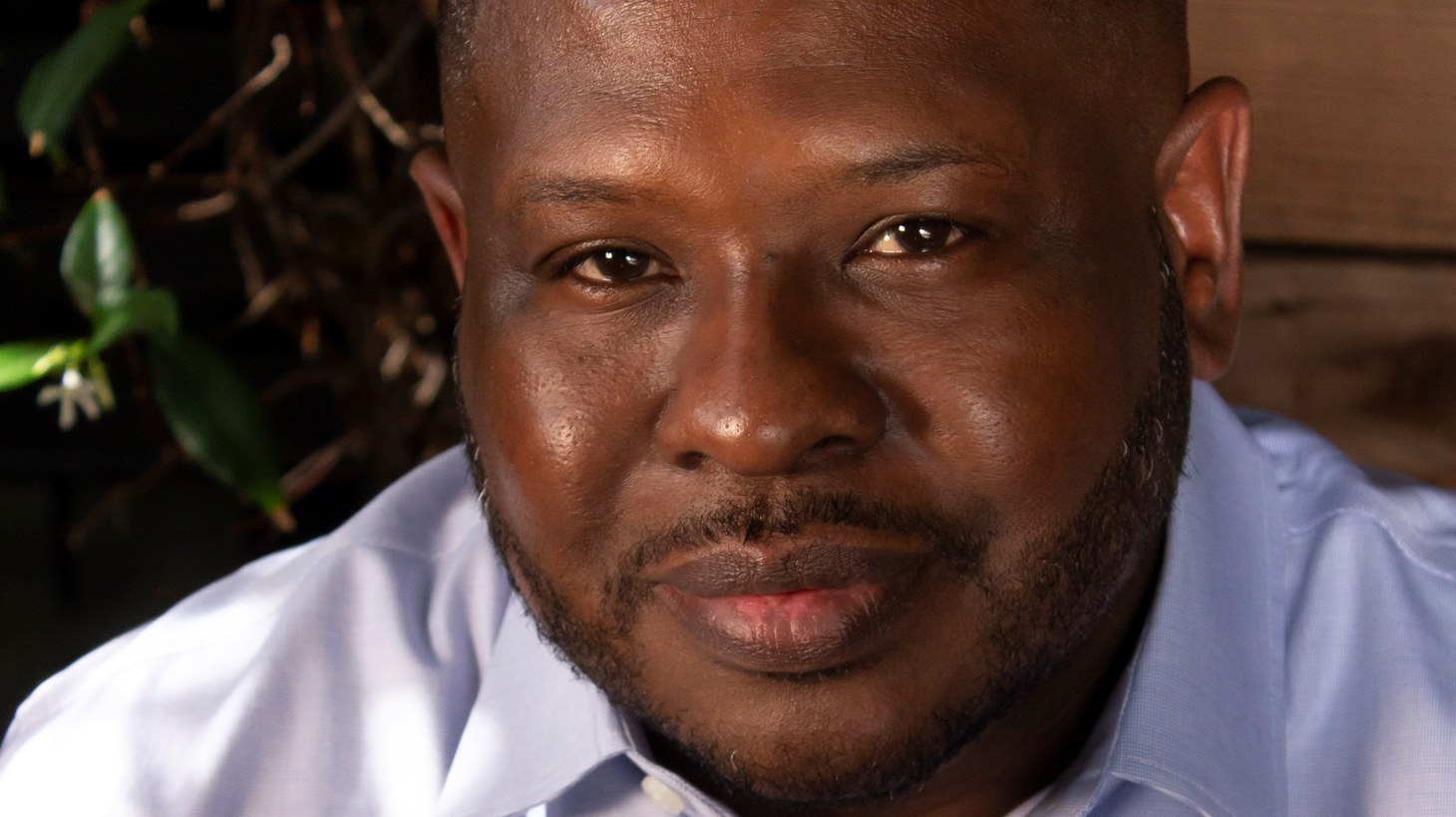 [At Alta Adams] everybody's from prison and everybody's from the ghetto. We ran one of the hottest restaurants in LA. We still hire the exact same way. I’ll never forget where I came from. I’ll hire those people that the rest of the people don't want to hire. I’ll take care of them,” says chef Keith Corbin. Courtesy of Keith Corbin.

Chef Keith Corbin was born in 1980 in Watts, growing up around gang violence, and living on his own by age 15, when he was cooking and selling crack with the Grape Street Crips. He flew across the country to cook drugs for gangs in other cities. By his 20s, Corbin was in and out of California’s prison system and served 10 years.

As a free man, he got a job as a kitchen manager at LocoL, created by chefs Roy Choi and Daniel Patterson. Afterward, he became the chef and co-owner of modern soul food restaurant Alta Adams in West Adams. He’s out with a new memoir, “California Soul: An American Epic of Cooking and Survival.”

His book doesn’t exactly detail the wonders of the American dream, Corbin points out.

“I started off in gang culture. I started off with a system of oppression. My family didn’t have no network to plug into if I went to college and came home. None of those things existed,” he tells KCRW. “This is not one of those stories where you come home from prison and you get a job, you enter mainstream white society, and all is forgiven like you walked through this magic door.”

He acknowledges that despite the opportunities he’s found, the gravitational pull of his old life still exists. That includes an incident two years ago, when his 76-year-old father was killed while driving.

Nourishment at home, violence outside

Corbin says his childhood home didn’t have locks on the doors, and his grandma Louella, who passed away when he was a teenager, fed whoever walked in and needed to eat. She spent most of her time cooking.

“[If] someone came over for the first time, our granny would ask you your name, when your birthday [was], and what's your favorite cake. And if you happen to come back on your birthday, that cake would be there waiting for you. And if you didn't come back, we ate it.”

Despite her presence, violence and gang activity seeped into the neighborhood culture. When Corbin was 13, his brother Troy was killed in a gang-related shooting.

He adds, “What I inherited was gang culture and drug culture. So my brother built a drug infrastructure. And when I turned 18, the only thing he had to offer me was to teach me how to cook drugs.”

Making his product stand out

While cooking crack cocaine and cooking in a restaurant are two different skills, Corbin says he’s seen some similarities. He chalks it up to the power of quality ingredients.

“It's [about] starting with a great base, proper sourcing. The same way you wanted a good kilo of cocaine, I want a good tomato, I want a good lettuce. So you want to start with a great base because that influences your output,” he explains. “When it comes to product in the streets, I was very keen on distinguishing my product from the masses.”

“In underserved and marginalized communities, there's a lot of drugs, hidden hustlers. And so in order for you to stand out, I had to have a distinguished product. That mentality, I carry over to when I create food. I want the food to be distinguished from the masses.”

Surviving jail and finding a palette

In his early 20s, Corbin was arrested, and one of his first stops was LA County Jail. He describes the place as at least 10 times more dangerous than prison.

“If you can survive LA County Jail, then you can survive prison. For one, the LA County Jail sheriffs is a gang of its own. And some of the most racist people [are] in there. I mean, they have a picture of John Wayne. … You lean on that poster, they beat you,” Corbin says. “The thing about the county jail, no one's there long enough to establish routine or to establish a system. Everybody’s passing through.”

When he was moved to Calipatria State Prison, Corbin started to cook. It was an opportunity to be creative with the few foods he had access to, including processed meats, noodles, and dried refried beans.

“Because the food is so terrible, my body and my taste buds began to ask for things. It's like you have a noodle that’s mushy, you [can] use something fatty or something smoky. ... And then, ‘Oh now this will be good with something spicy and little crunchy.’ My palette began to talk to me.”

After leaving prison in 2014, Corbin got a job at LocoL, but all that mattered to him was getting a check. And as a result, he almost squandered the opportunity.

“I didn't treasure it because I had no idea where that opportunity [could] take me. There was no representation, nowhere in my orbit that I can see and aspire to. And I quit numerous times. When things got hard in the kitchen, when I didn't want to have nobody telling me what to do, I quit.”

At the time, Corbin was also dealing with cocaine addiction and the emotional trauma of his upbringing.

“I come home from prison. I get this job. But I haven't dealt with none of my issues: the death of my brother, that emotional trauma. The abandonment issues I have with my mother being on drugs, not there to raise me. My own cocaine addiction. My vulnerability and my fear of retaliation because I am exiting the gang life. …  There was so much going on. So I wasn't really able to focus on just putting my head down and … being a chef or learning how to cook. I was still navigating life.”

Corbin credits Patterson, one of LocoL’s founders, for his lasting support through that dark period. They were able to connect through shared struggles.

After Corbin moved to San Francisco, he was able to get back on his feet.

“I didn't have the weight of LA on my shoulder, I was able to walk to the store. I didn’t have to look over my shoulder. So that fear subsided. There was a release.”

Fighting for co-ownership of Alta Adams

In 2018, Corbin and Patterson opened Alta Adams. Corbin was the brainchild behind the menu, which includes the California soul food he grew up eating.

However, Corbin wasn’t initially an owner of Alta Adams, despite Patterson promising he would be one.

Corbin says he felt exploited at the time — partly because he didn’t understand contract law or have access to a lawyer.

“That's why so many of us get screwed — because we get the opportunities and we're trusting because we don't have the financial capital to get legal advice on legal help. And we get beat,” Corbin says. “I was stressed. I was bitter. It really fueled my drug addiction and my spiral, where I almost just lost control because I felt trapped in this false narrative.”

Eventually, the agreement to become a co-owner was honored. Corbin says that happened after he got clean.

“My association and brand with Alta was synonymous. I don't want to say that that's the only reason why they agreed, but it was hard to separate me from Alta at that time. Because this is not nothing I created by myself. But Atla wouldn't be where it is or what it is without me. I think the investors and owners came to realize how important I was for that restaurant.”

Today, Corbin says he wants to help those from marginalized communities overcome their struggles. He recognizes that many people aren’t afforded the same opportunities he was given.

“When Alta reached all that celebrity notoriety, everybody in there was from prison. So we've already shown them that we can come home and do it. Everybody's from prison and everybody's from the ghetto. We ran one of the hottest restaurants in LA. We still hire the exact same way. I’ll never forget where I came from. I’ll hire those people that the rest of the people don't want to hire. I’ll take care of them.”

Excerpt from California Soul: An American Epic of Cooking and Survival by Keith Corbin

‘California Soul’: Journey from drugs to jail to restaurant co-ownership

With inflation and concerns about crime, this election cycle doesn’t bode well for Biden and Democrats, while Republicans are in a good position to win November races, says...