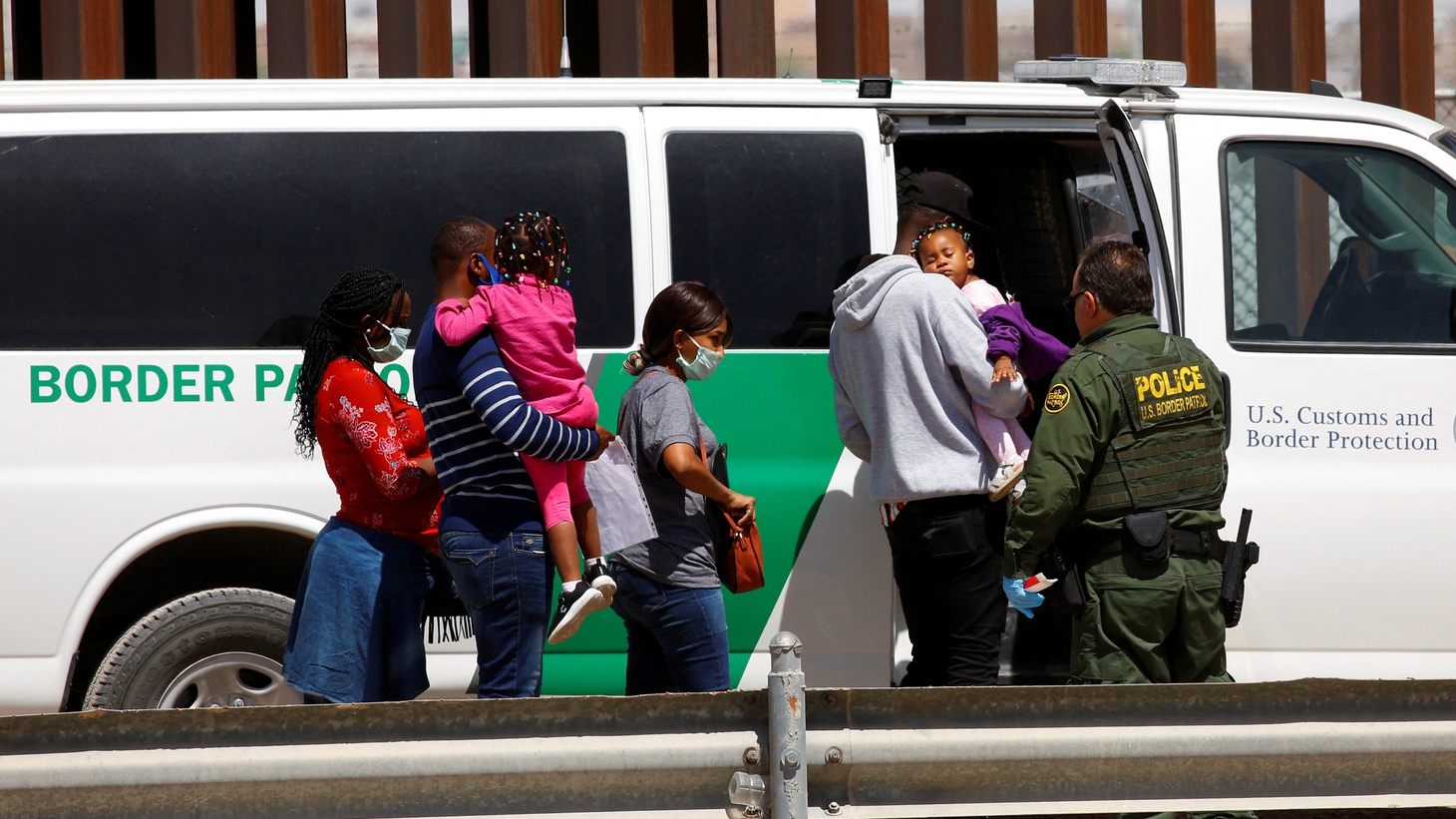 Asylum-seeking migrants are taken to a van by U.S. Border Patrol agent after they crossed the Rio Bravo river, in El Paso, Texas, U.S., as seen from Ciudad Juarez, Mexico, April 6, 2022. Photo by REUTERS/Jose Luis Gonzalez.

“Zero tolerance,” an immigration policy announced in 2018, came to define the Trump administration. It separated families who were detained while immigrating to the U.S. It was quietly in effect as a pilot program for a year, but when audio of sobbing children in detention centers hit the air, bipartisan outrage broke out. Former President Donald Trump quickly ended the policy a month and a half later.

His administration insisted that the separations were merely a consequence of the policy and not its ultimate goal. But that wasn’t true, according to The Atlantic immigration reporter Caitlin Dickerson. She tells KCRW that separating families was always the goal, the policy’s worst outcomes were expected, and some government officials actively worked to keep families from being reunited sooner.

She explains that the idea to separate families as a deterrent to migration can be traced back to Tom Homan, a high-ranking deputy in the U.S. Immigration and Customs Enforcement (ICE). The strategy was initially introduced under the Obama administration, but was shelved. Then it was presented to Stephen Miller, Trump’s chief immigration advisor.

Miller, who was widely respected and listened to by Trump's cabinet, was excited about the policy and pushed it forward. Anyone who was skeptical of the idea was pushed out.

“These were ‘speak when spoken to’ environments. They were not environments where people were being asked, ‘Do you have any pushback? Do you have any concerns?’ … That was really a reason that was presented to me for why certain people stayed quiet. But anybody who was identified as being skeptical of this idea, over time, they were cut out of conversations about it.”

“She was assured that infrastructure existed to prevent prolonged separations from happening. That, of course, wasn't true. She and her advisers were also assured that this had been done before,” Dickerson says.

When interviewing Trump officials, Dickerson says she asked why they approved a plan that didn’t lay out a process for family unification after detainment. She says she heard all sorts of answers, but it shows how little discussion went into the details of rolling out “zero tolerance.”

“In a best case scenario, some people like Nielsen perhaps told themselves that prosecutions would happen in a matter of days, if not hours,” she explains.

“He tried to make sure that families would stay separated longer. So very, very little planning took place,” she says. “One email from Matt Albence says that swift reunifications would make the department look bad, or would totally undermine the goal of the entire effort.”

Even if Trump officials wanted to reunite families, Dickerson says there was no central database that documented where children and their parents were. She says one U.S. attorney she interviewed was confused over why data wasn’t collected.

“This U.S. attorney says, ‘5,000 separations is a very large number in terms of human consequences, but it's not a large number in terms of data management. Why don't we simply have an Excel spreadsheet to keep track of families? … You could have done something even simpler, like put wristbands on parents and children with a matching ID number. Any number of measures could have been taken to try to make reunifications easier.’”

“My reporting showed that just nobody thought about this. Nobody took a second to come up with a solution for this problem, except for people within the bureaucracy who were raising red flags about separating families. They did think about this, but their concerns and their recommendations were completely ignored.”

Former Secretary of Health and Human Services Alex Azar was also widely unaware of what was happening under “zero tolerance.” Dickerson says that’s due in part to his focus on prescription drug pricing, despite the fact that many of the separated kids ended up in his agency’s care.

“His story is important because there are so many people in government who do not understand immigration, even those who really should, and whose jobs require it. A lot of people just seem like they can't be bothered to get up to speed on this issue, which again, can be life and death for people, or in this case, we're talking about a policy that has lifelong consequences,” she says.

When interviewing families, Dickerson says families would get emotional when talking about being separated.

“They're immediately in tears. And really, frankly, a lot of times experiencing PTSD, flashbacks. A lot of the kids are experiencing developmental delays. So things like bedwetting, loss of vocabulary, [and] just feeling fearful of leaving home, and really not trusting anybody, and constantly worried that they can be separated from their parents.”

She says some parents have been so focused on their kids that they’ve neglected their own needs.

“I've heard both parents and kids say to me, ‘This is not the person I was separated from. I don't really recognize them.’ And so that's why even those who are in the best situations, who were unified after a few months, still very much feel like this experience is with them every day.”

Today, 700-1000 kids still haven’t been reunited with their parents, Dickerson says. Government officials theorize some families might have found each other and didn’t report their reunification, while others could be staying with extended family in the U.S. But she points out that there might be as many as 150 kids whose parents haven’t been located at all.

Dickerson says there’s no question that family separations could happen again, especially under another Trump presidency. That’s because many members of the immigration enforcement community still believe it’s a good idea and helped lower the number of border crossings.

“A lot of them would whisper to me under their breath … ‘Most people don't like to acknowledge that family separations actually work, that zero tolerance was actually effective.””

Dickerson argues that the policy didn’t dissuade immigrants because they had difficult economic and safety conditions in their home countries.

“President Trump's biggest year for border crossing — when records were broken [and] nearly a million people crossed the border — was 2019, the year after family separations began. This was not a meaningful deterrent in any substantial way,” she explains.

“Congress has not updated our laws to address the current situation at the border. And so you basically have this police force that's left to figure it out on their own. They're not economists. They're not makers of humanitarian policy. They're enforcement authorities. And so this is really the only tool at their disposal.”