President Obama won the Nobel Peace Prize in 2009 -- when he was barely in office. It was seen more as encouragement to the new leader than a reward for his accomplishments. In Oslo today, the Norwegian Nobel Committee announced this year's award to the President of Colombia, Juan Manuel Santos "for his resolute efforts to bring the country's more than 50 year long civil war to an end, a war that has cost the lives of at least 220,000 Colombians and displaced close to six million people." 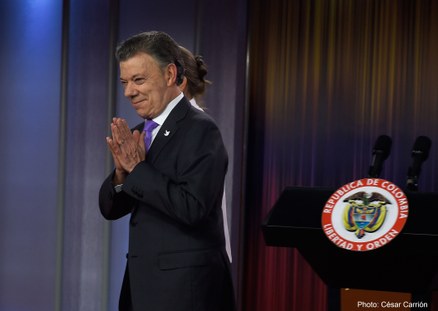 President Juan Manuel Santos reacts after learning that he was
awarded the 2016 Nobel Peace Prize.

As we go on the air, Hurricane Matthew hasn't yet caused the death and damage that's been predicted, but President Obama has reminded millions of people they're still in...

The US is one of the only countries on Earth without some nationwide form of paid leave for the parents of newly born children. Donald Trump would go where Republicans...

President Obama won the Nobel Peace Prize in 2009 -- when he was barely in office. It was seen more as encouragement to the new leader than a reward for his accomplishments.