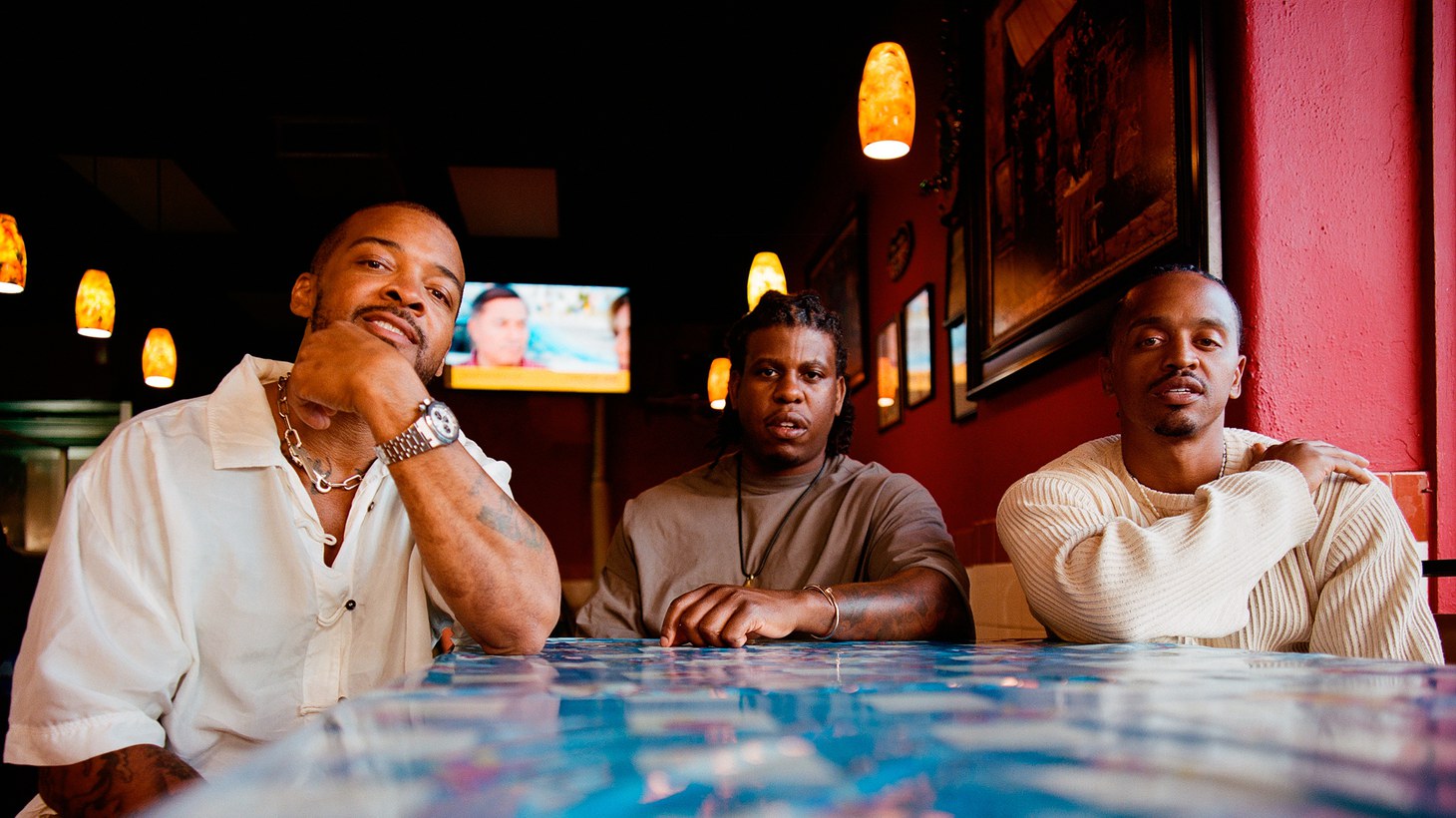 From left to right: Jon Gray, Lester Walker, and Pierre Serrao created Ghetto Gastro, a Bronx-born culinary collection that aims to look at the food world from a point of view that celebrates Black culture and inspires conversation about race history and food inequality. Photo by Josha Woods.

At a time when food is often seen as the kinder, gentler way to gloss over difficult gatherings, it's good to remember that food and the conversations around food have the power to change narratives. Ghetto Gastro is a Bronx-born culinary collective that wants to look at the food world from a point of view that celebrates black food and black culture. Jon Gray and Pierre Serrao are two of the three collaborators who created the book “Black Power Kitchen.” Written with Lester Walker, the new cookbook is jam packed with history, art, culture and recipes.

KCRW: Let's just start with the title Ghetto Gastro. Ghetto is a word that for a lot of people has a lot of negative connotations. Obviously, you chose it extremely intentionally. So kind of break down what it means.

Jon Gray: When we started with the name Ghetto Gastro, we understood it was polarizing. But for us, it was really to celebrate where we're from, and the significant cultural contributions that come from communities that have been blighted and underestimated. We really wanted to turn on its head how people think about the word ghetto, and not to cater to the white gaze or to external communities, but really to have an internal conversation with people from environments that have been underestimated. We know that we are valuable, and our creations have value as well.

Your expressions aren't just culinary. They're multimedia and multidisciplinary. How did you find one another and decide to create together?

Pierre Serrao: We were all on our separate journeys in life. Jon and Lester had grown up in the same neighborhood in the Bronx, and Co-op City, in Section 5 to be specific. The two of them had just had conversations about creating a business around food that was more inclusive for people like us; We were tired of going into different spaces and hearing our music playing on the on the speakers and our pieces of our culture used for the vibration, but like when we look around, you see people who are in managerial positions in positions of power – they were no people of color, or any black people in those positions. So Ghetto Gastro was an idea that was formed. I think it was in a nap that Jon came up with the name. Jon, Les, and myself have just been on this mission to create a space where there's more of us.

The book really reflects this multimedia kind of exuberance in this journey. You feed your conversations with artists, writers, and creators, as well as chefs. How does food come into play?

Jon Gray: Food is a great medium to disperse information and tell stories. We look at food as the first social network. When you think about ideas being fed, bread being broken. And food is also a tool. It's a soft power tool. We just wanted to make it a little harder and more in your face. So, for us, it's about nourishment for the mind, body, and the soul.

Tell us about W.O.L.F (We Only Layer Flavors) and what a Ghetto Gastro dish is, and how it's built?

Pierre Serrao: When we talk about W.O.L.F, and when we talk about layering flavor, we layer flavors in different ways on our side. It's what the actual flavors that you're consuming with the stories that go into the food. Talking about how important storytelling is in the creation of a Ghetto Gastro dish, our quintessential signature dish is the triple C's, which is cornbread, crab and caviar. In that dish, we are having a conversation around the collaboration between indigenous Americans and enslaved Africans who shared that corn crop and the knowledge around that which created the cornbread, which was like America's bread. And then we also go into talking about how the crab salad is representing black people in our communities – have always been known and had this conversation about being crabs in a barrel. But we on our side, understand that crabs don't belong in a barrel, they don't thrive in barrels, they thrive in the sea, and in the open so, and on top, we're putting this caviar, which is black at the top, and also black at the foundation with the cornbread. But the conversation around the caviar is that it's this European luxury, it’s this European luxurious ingredient. But it actually originates from the Middle East in the Caspian Sea. So when we think about just the layering of flavors from storytelling, these are all different elements that go into creating dishes at GG.

I want readers to get a flavor of how much is jammed into your work. Your cornbread is a great example. It's one of the first recipes in the book. The recipe followed by this wonderful painting by Henry Taylor, and a poem by Aja Monet.

I was actually with Henry at his home in Los Angeles. And I saw the painting in his kitchen. And I was like, ‘Yo, this painting is crazy.’ And I noticed the cornbread and the syrup. I'm like, ‘We need this. We need this for the book.’ He said, ‘This painting is my mother, my mother's name.’ His mother passed away. Her name is Cora. So when you see the painting, it says ‘cornbread’ on two lines. But you see he highlighted ‘Cora’ within the two words of corn and bread. So it's really an ode to his mother. And I was like, ‘That makes it even more special.’ And then we had our brother Chase Hall, who was a disciple, and Henry Taylor, one of his mentors, do the painting of the gentleman holding the crab because he did a series that was focused on like black fishermen in New England. Then, Pierre reached out to Aja Monet, to lace us with some words.

I'd love to ask you about the maroon shrooms. Talk about the connection to the people called ‘Maroons,’ and how it's cooked in the ground, and why?

Pierre Serrao: We wanted to highlight the emancipation of the Maroon people, who were no group of people who fled the enslavement in Jamaica and went into the mountains. They created the technique of barbecuing known as jerk. In this jerk technique, they were cooking in the mountains, and they cooked under the ground buried underneath, with banana leaves and leaves, which created a smoking effect, which is how you get the smoked chicken. But the reason they did that was so that the smoke didn't give off their position and their whereabouts to the colonizers.

So, for us, we're using that dish and we're highlighting some plants in that district using mushrooms as our vegetable of choice. We're using natural fruits to sweeten the dish as opposed to refined sugars. So in that dish, you'll see Japanese pears, and apples that are mixed with roasted kombu and Scotch bonnet and allspice, that we create a marinade with those things. The glaze is made with coconut nectar and honey. So we're getting our sweetness from different places, not using any sugar, and just layering the flavors once again, and telling these stories about our ancestors who paved the way for us.

Our cooking ethos is guided by a few important principles: It’s gotta be right and to the bite. Done with finesse, but make it look effortless. Our food is delicious and beautiful. Intentional and subversive. And always with that swag, as in the Triple Cs.

Triple Cs is quintessential Ghetto Gastro, so it deserves to stand on its own. It features seared cornbread, crab salad, and caviar. 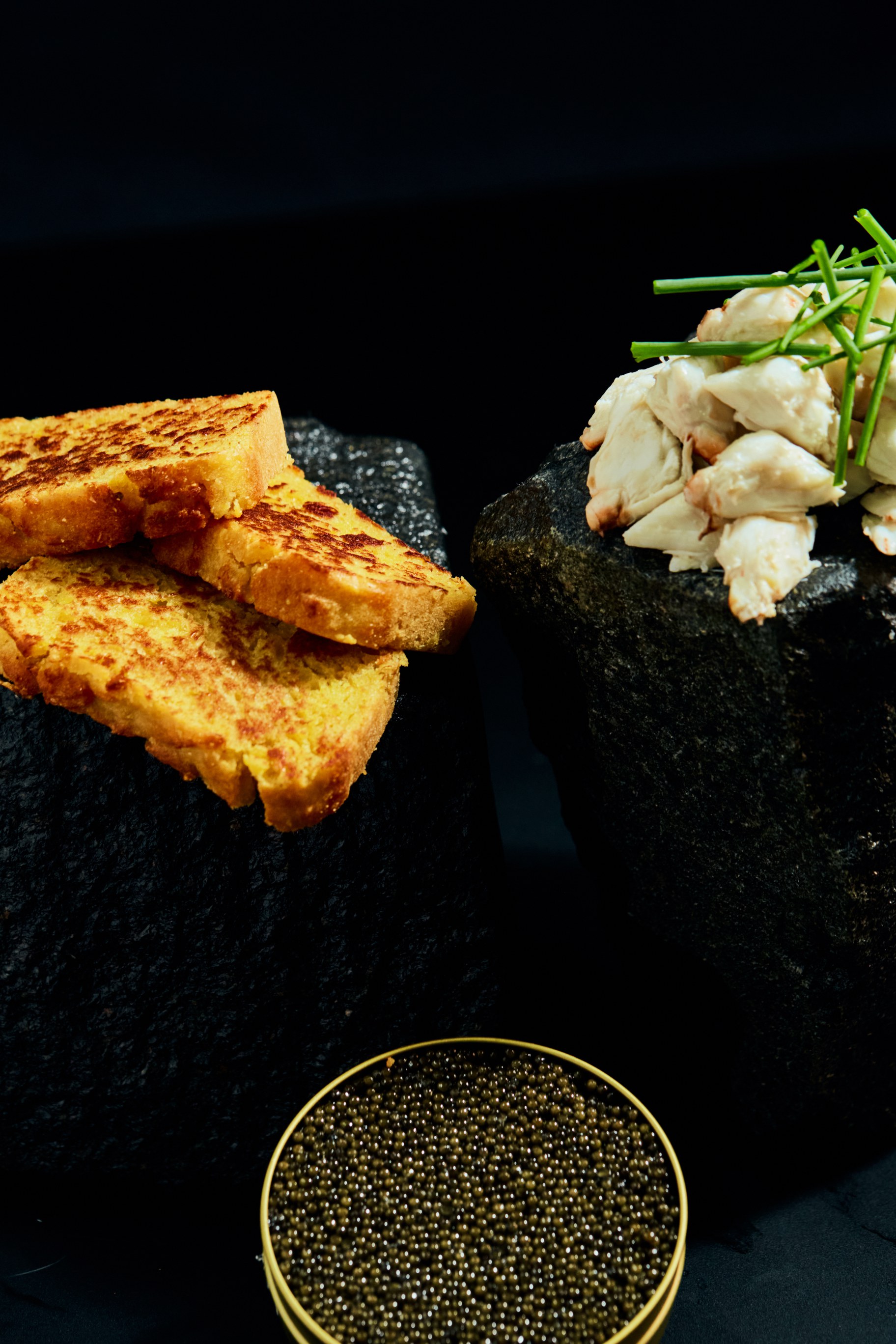 Cornbread, crab, and caviar is a quintessential signature dish of Ghetto Gasto, an edible narrative of the collaboration between indigenous Americans and enslaved Africas. 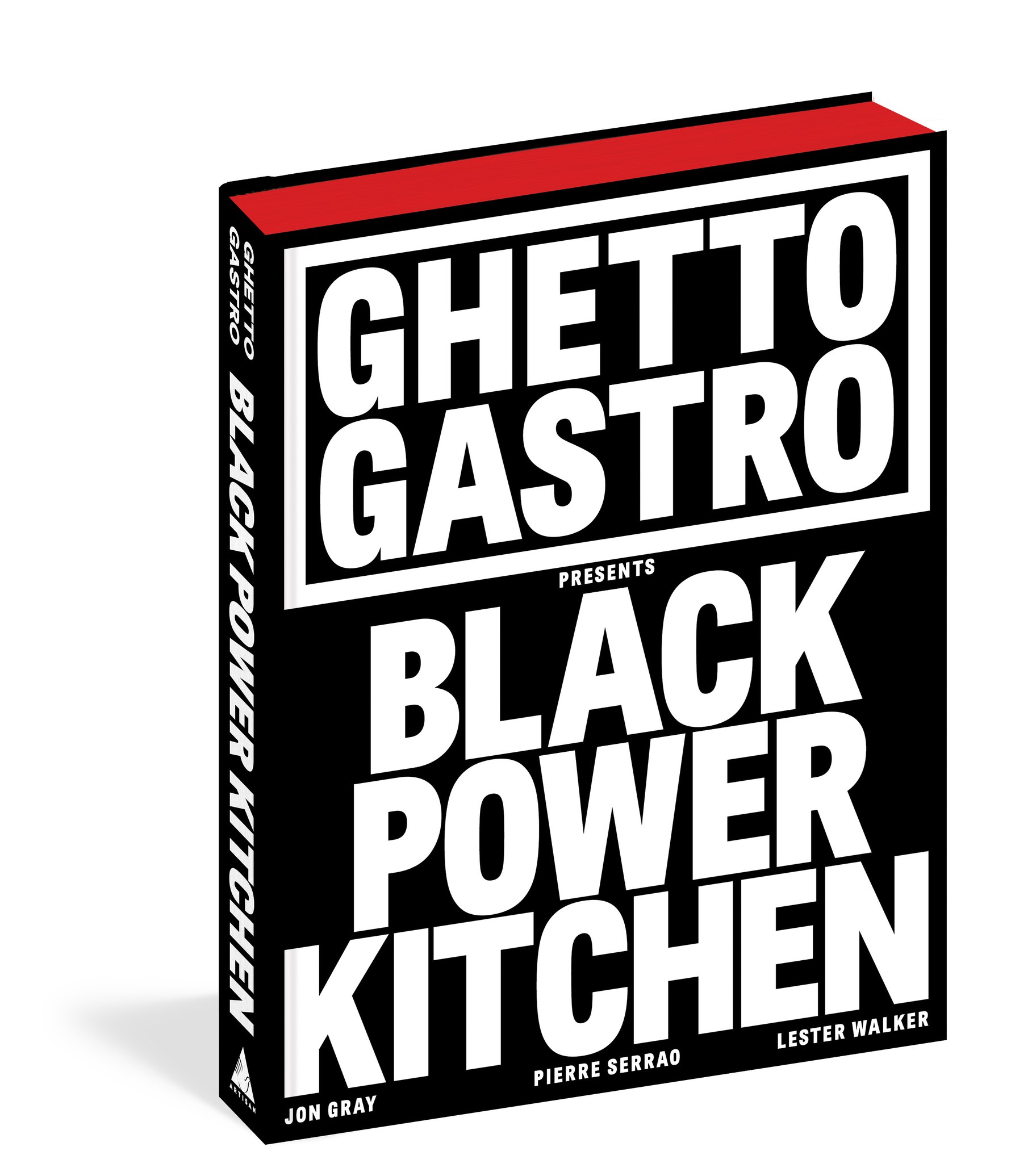 Storytelling is a major ingredient of any Ghetto Gastro dish. The culinary collective’s cookbook is “Black Power Kitchen.” Photo courtesy of Artisan.