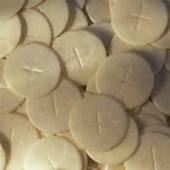 We eat to live and live to eat.  Food transcends mere nutrition when it takes on symbolism in the rituals of our cultures.  But what happens when, due to illness or dietary restriction, one can’t consume the very food that is woven into the fabric of one’s faith?

Taking Communion caused such a problem for those who couldn’t eat the gluten commonly used in communion wafers.  While it sounds simple to eliminate the gluten, the Catholic Church requires that the wafers be made with wheat, including the naturally-occurring gluten.

Two nuns took this task upon themselves and set out to solve the problem.  After much experimentation, Sister Lynn D’Souza created a communion wafer with the tiniest amount of gluten.  So small, that most people with sensitivity to wheat gluten can still eat it; and just enough that it satisfied the requirements of the church.  A miracle?  Perhaps.

People in need of gluten-free wafers can contact the Altar Breads office at 800-223-2772 or use the website.

The San Antonio Winery was one of the first and now the last winery in Los Angeles. Established in the early 1900s, the family winery has survived for four generations...

Still Incredible and Quite Edible Egg

It just isn’t Easter without a house full of hard-boiled eggs. But what do you do with the leftovers when the egg hunts are done and the last Easter basket filled?...

For the Love of Peeps

Cybele May is the author of a blog devoted to sweets and confections, CandyBlog.net , and is the perfect resource to tell us everything we ever wanted to know about...

The Jelly Belly Candy Company was the first company to popularize the gourmet jelly bean – bringing unusual flavors like popcorn and peanut butter to the taste buds of...

On a Slow Boat to China

We first talked to Mark Schatzker, a writer and self-described omnivore, two weeks ago when he began his journey around the world by way of land and sea. He had just...

Abby Dodge is a food author, contributing editor and teacher. She has been a passionate baker since she was a young girl, cooking with her mother in her home in...

Laura Avery gets the first taste of summer when she and David Karp meet to talk about fraises du bois -- wild strawberries. Currently, two farmers have them at the Farmers...

We eat to live and live to eat.

Effervescent color tablets aren’t the only way to dye Easter eggs. The Ukrainian art of egg decorating, pysanky, dates back more than 1,000 years. The intricate...