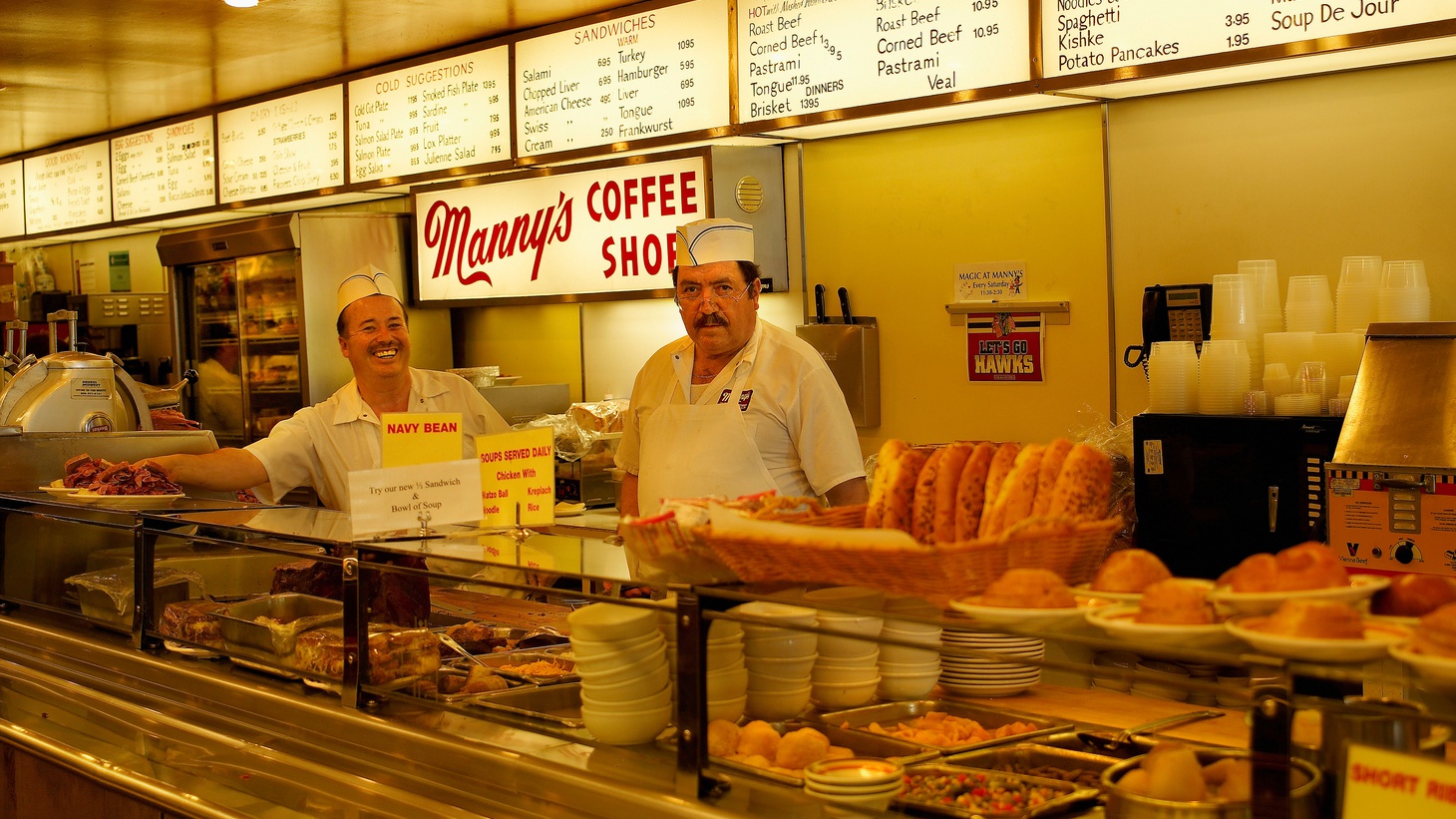 A wave of Ashkenazi immigrants fleeing persecution in Central and Eastern Europe starting in the 1880s helped bring Jewish deli culture to the United States. In the new exhibit “I’ll Have What She’s Having” at the Skirball Cultural Center, Cate Thurston and Laura Mart, who curated the show along with Lara Rabinovitch, explore how they imported their traditions to create a new American restaurant.

KCRW: How did immigration to the U.S. create the deli? Where did the immigrants come from, and when did they start arriving?

Laura Mart: We are looking at the so-called influx of Ashkenazi Jewish immigrants from Central and Eastern Europe from the 1880s to 1924, when the Emergency Quota Act was passed. And this is a period where you have Jewish immigrants who are fleeing persecution, fleeing pogroms, violent attacks, fleeing really hostile societies, often where they had previously lived and then had come under a good amount of persecution again.

So many of them made their ways to the United States, where they imported their traditions. We have objects in the exhibition that speak to this – suitcases, and candlesticks, as well as items related to foodways. So we're looking at how these immigrants adapted their foodways and their traditions from all over Central and Eastern Europe, very different places with different cuisines and traditions, and brought them all together under one roof at the deli.

Was there any cross pollination from non-Jewish, German immigrants who had also been coming over during this general time period, and who had experience with processing meat?

Where and when did we start seeing the Jewish deli? Do we know which was the first?

Laura Mart: Like many things related to the restaurant industry, the first Jewish delicatessen is the stuff of legend and speculation. We have a fascinating object – a tiny matchbook in the exhibition from a deli called Sussman Volk. [The deli] was in New York, and it claims to have opened in 1887, which would be one year before Katz's Deli was founded. Many historians doubt that this is in fact when Sussman Volk opened. It has since closed, but it was perhaps more of a marketing ploy than truth. Katz's Deli was founded in 1888, originally called Iceland Brothers, and it was a different deli.

But this coming together of the different Jewish, European foodways in a brick and mortar restaurant, started around the 1880s. But at the same time, you still had a lot of new Jewish immigrant arrivals who are doing street vending. We focus on that in the show, with a section called “Street to Shops,” where we look at how immigrants sold pickled herring out of barrels, and pickles, bread, and bagels out of pushcarts.

This food began in humble ways, with immigrant entrepreneurs who started their businesses with whatever resources they had available to them. Moving into the 1910s and 1920s, delis started to develop brick and mortar locations where there would be a counter service with different prepared dishes. This was a place where people would buy their specialty kosher processed foods. Later, in the 1920s through 1940s, we are looking at the second generation Jewish Americans, the children of immigrants who maybe are a bit more well off than their parents’ generation had been. And this is when you start to get more luxurious delis that have sit-down dining rooms. 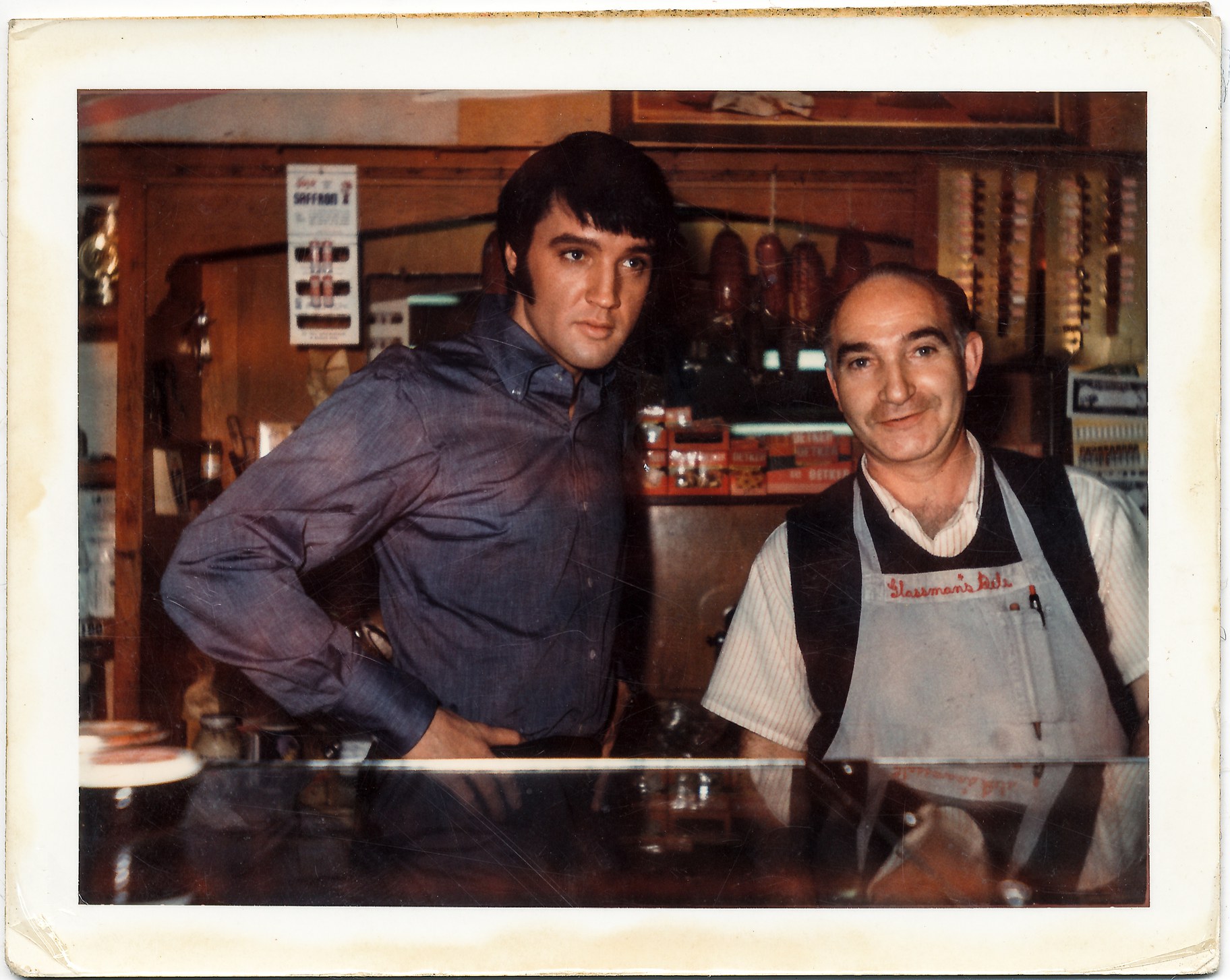 I think it also becomes a family destination of root reaffirmation once these large restaurants start to happen.

Cate Thurston: Absolutely. The deli becomes more than just a place to eat. The deli becomes a place to gather, and a place to gather for all peoples. It's woven into the urban American fabric. Often you have waves of Jewish immigration that are a precursor to other waves of immigration from folks from all over the world. And these delis really serve as a hub within communities where folks can eat late, they can break fast, they can go together as a family. And so I think that's a really insightful point about the delicatessen as a place for families and a place of gathering.

Were delis from the very beginning meat-centered? There must have been separate appetizing stores because of Kosher laws. Were the meat portions always as insane as they've become in these monster sandwiches?

Laura Mart: I love that question. Yes, originally, there were two distinct traditions and many establishments still follow these guidelines. There were delis that served meat-based dishes, grains, and other neutral foods. And then appetizing stores served fish and dairy. Places like Russ and daughters is an appetizing store. We feature it in the exhibition to talk about this distinction. And then, as American Jews became more used to mainstream styles of dining, many delis started to serve dairy as well and lost that kosher distinction. 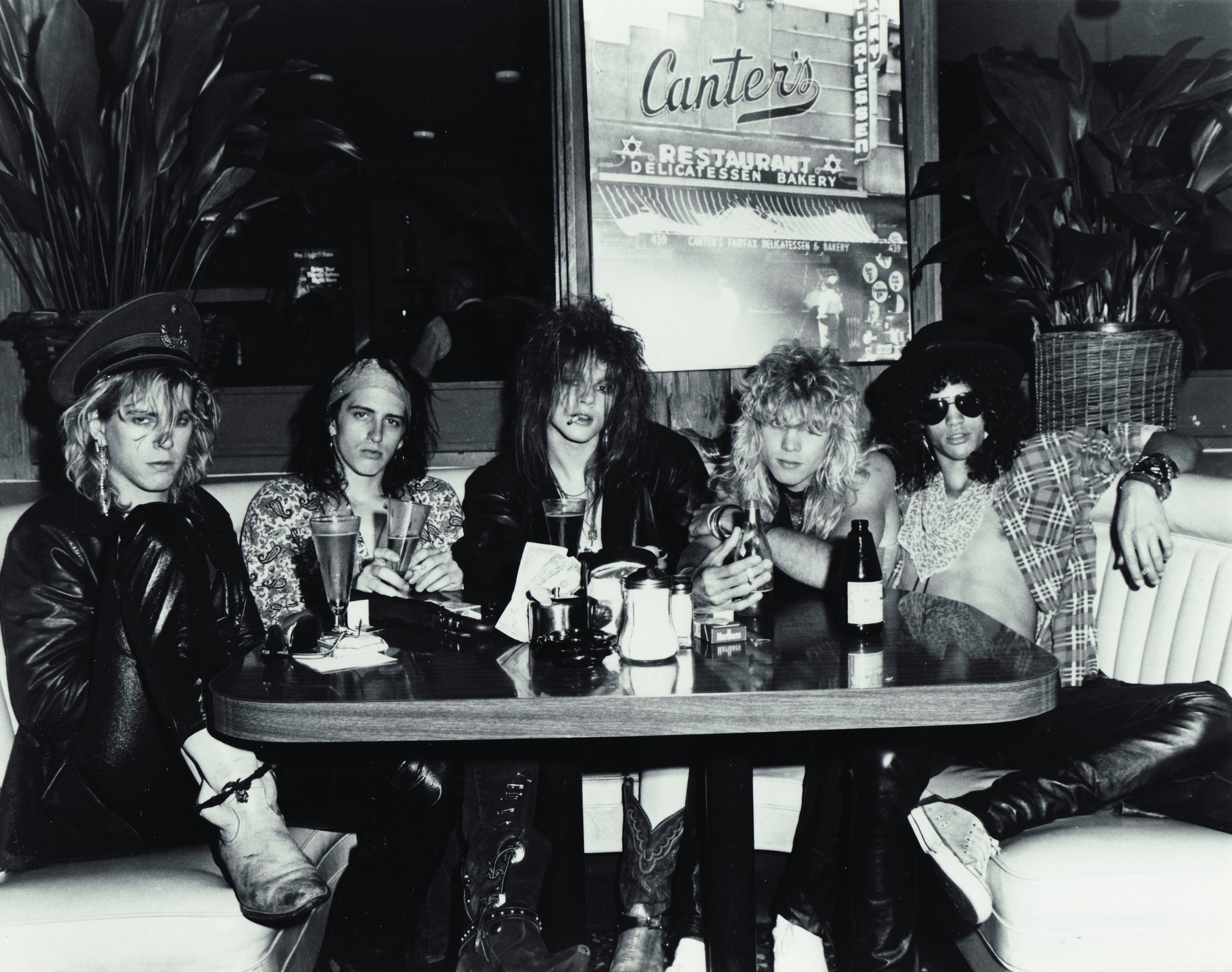 Guns N’ Roses were known to frequent Canter’s Deli on Fairfax during their early days as a band in the 1980s. Photo by Jack Lue.

New York may be the epicenter of Jewish delis, but LA has had its fair share where surnames are frequently used. Have delis always been a family affair?

Cate Thurston: One of the things that's really interesting in the exhibition that we feature are these family delicatessens that pass down from one generation to the next, but a tweak on that family story. There are delis that we featured in the exhibition, David's Brisket House in Brooklyn comes to mind, where the deli passes from one family to another family. So it's no longer going along a line of lineage in terms of descendants, but another family is partaking in the management care and maintenance of the restaurant. What's so interesting about David's Brisket House is that it was originally started by a Russian Jewish immigrant. And then it was run in partnership with a friend who was Muslim, and now it is run by Yemeni Muslim immigrants. And so we see these different immigration stories, these different family stories all coalescing at the deli. I love that. 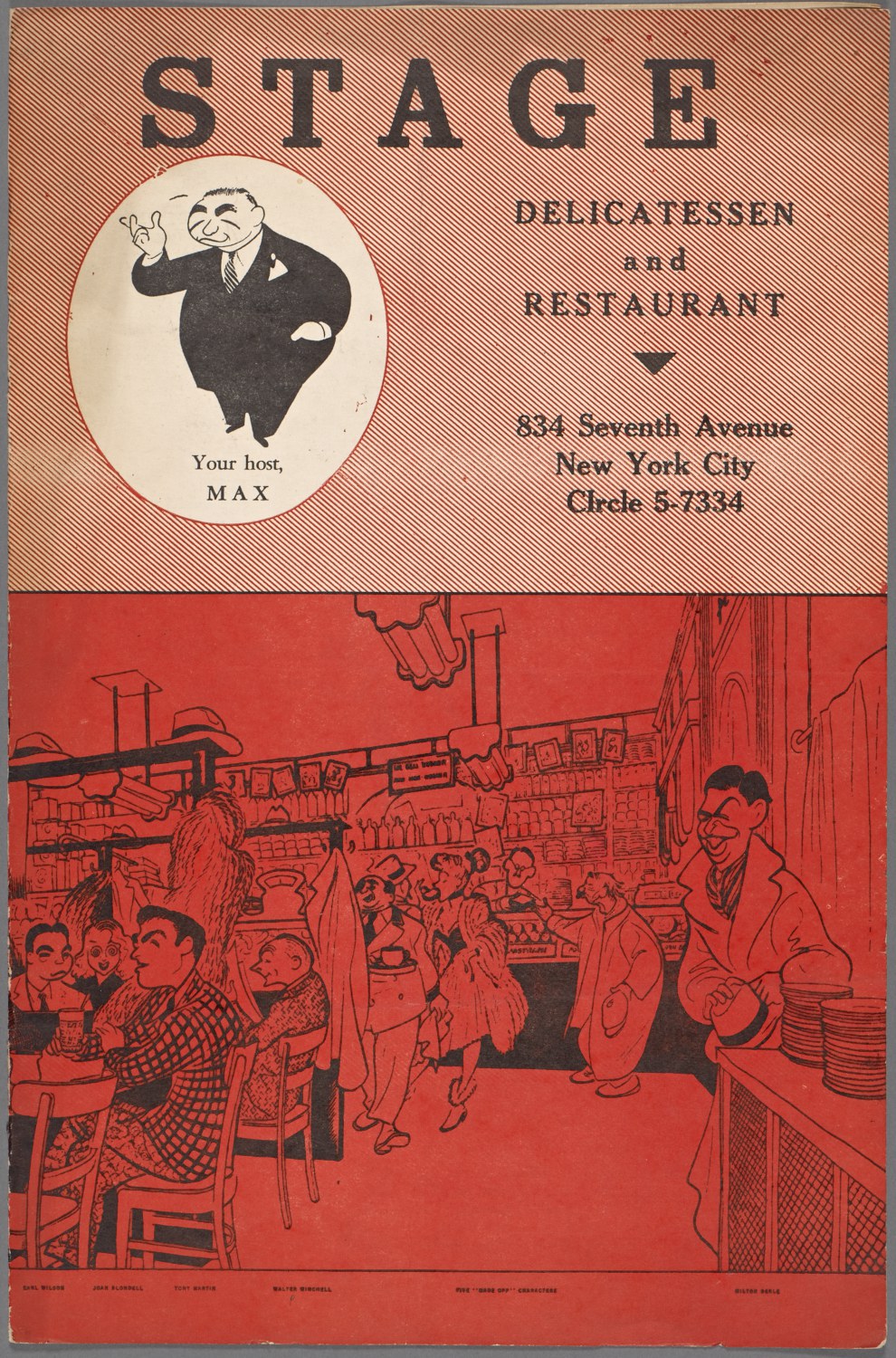 This menu is from Stage Delicatessen in New York City in 1956. Courtesy of The Dorot Jewish Division, The New York Public Library.

Tell us about some of the delis you featured and why you chose them.

Laura Mart: One of the delis that we feature in the exhibition is a deli called Drexler’s Deli. It's now closed. Drexler’s was in North Hollywood, and it was a kosher deli for its whole existence. It opened in the early 1950s and closed in the 1990s. And what's so special about Drexler’s Deli is the story. Rena Drexler was a survivor of the Holocaust. She was liberated from Auschwitz on her 18th birthday. She was looking for her family in Poland and in Munich, and she met her husband Harry there where they started to work together and in a deli. And then soon thereafter, they decided to move to the United States.

After a few years of saving their money, they opened Drexler’s Deli, where they served kosher specialties and all sorts of groceries to the local community. Drexler’s became a community anchor for these people, not only because it was a place where they could buy what they needed, like kosher groceries, but also because Rena and Harry were really known for their listening over the years. Rena said she learned how to trust people again, by serving at the deli. 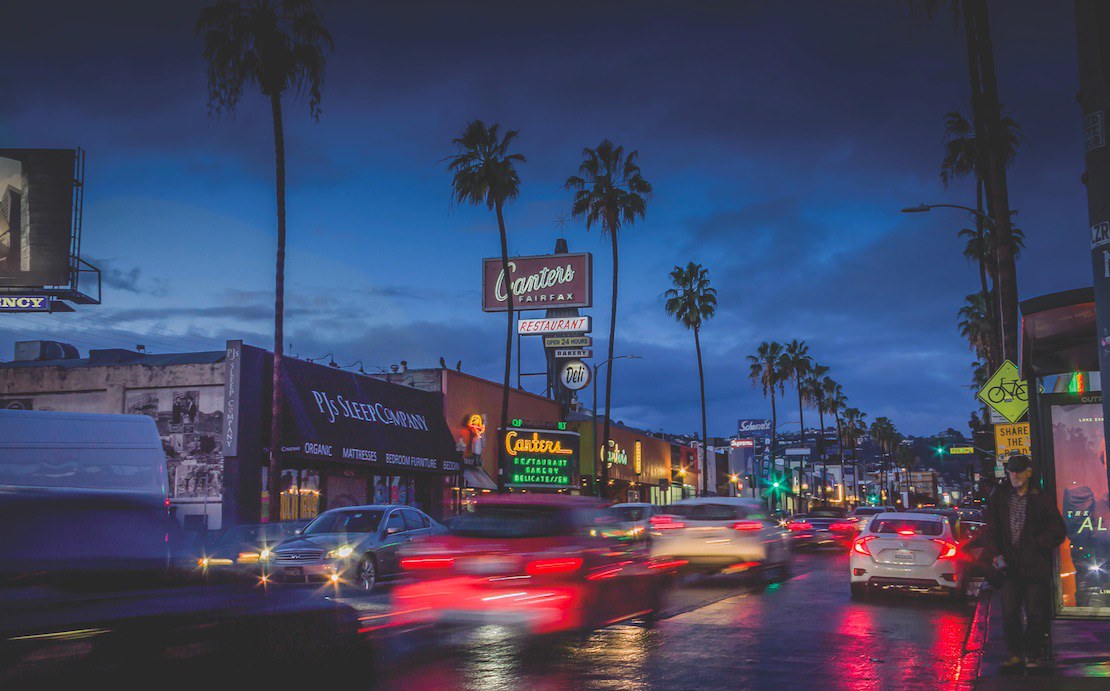 What is your favorite deli order?

Cate Thurston: Laura and I have had the pleasure of eating a lot of deli together, and I think one of the things that's fun is we switch it up a lot. My can't-fail that I have to have at every delicatessen is a pastrami sandwich. I’ve got to have it whether it's one bite or a whole sandwich, I have to eat it.

Laura Mart: We often share the pastrami sandwich because we like to order so much food, probably enough to feed four adults for three days. I like to get matzah ball soup. I think it's fascinating how different restaurants will make the matzah balls in a different size and sometimes they float. And they're beautiful. And sometimes they're a little denser. But I love chicken soup. They call it Jewish penicillin. I'm pretty sure it's a health food. Probably the closest thing to health food that you can possibly get at a deli, maybe celery soda as a close second.