Excerpted from "Lavash: The Bread that Launched 1,000 Meals, and Other Recipes from Armenia" by Kate Leahy, John Lee, and Ara Zada. Photo credit: John Lee

In Armenia, saying “let’s eat,” translates to “let’s eat bread.” That’s because bread is the foundation of every meal. And that’s especially true here in Los Angeles, home to the largest Armenian population in the U.S.

Food writer Kate Leahy, chef Ara Zada, and photographer John Lee recently teamed up to write a book informed by their travels in Armenia. It’s called “Lavash: The Bread that Launched 1,000 Meals, and Other Recipes from Armenia.” 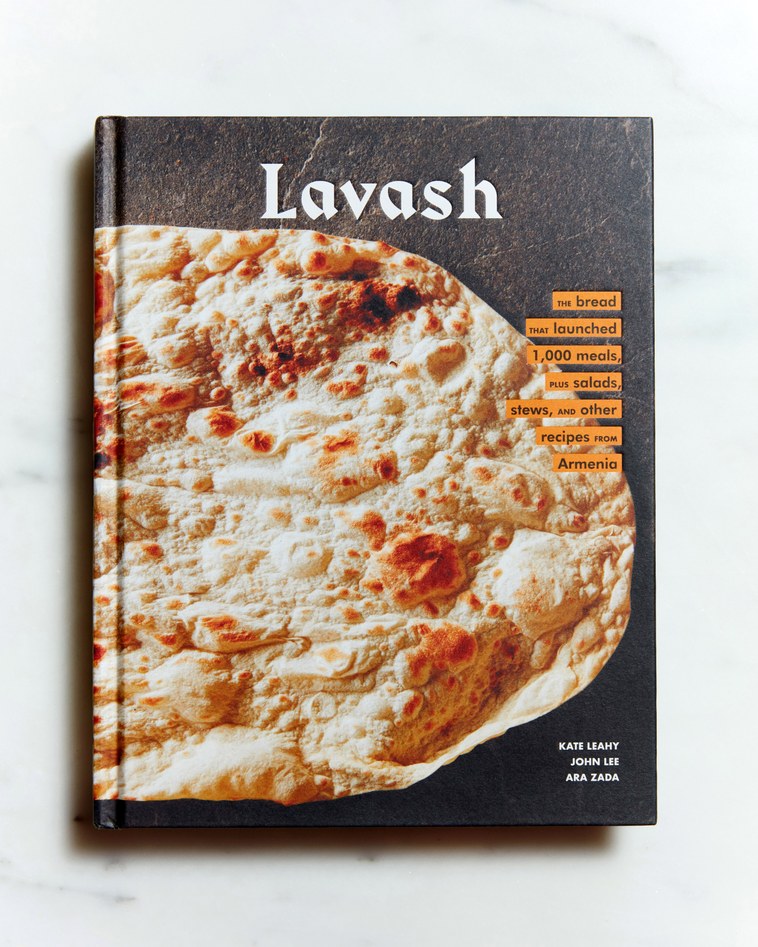 The front cover of "Lavash: The Bread that Launched 1,000 Meals, and Other Recipes from Armenia" by Kate Leahy, John Lee, and Ara Zada. Photo credit: John Lee

Some of Armenia’s medieval monasteries look as if they’ve been pulled out of fairy tales, making a rice-filled Cinderella pumpkin feel as if it fits right into the narrative. But most Armenians think of this dish as the subject of an earworm of a folk song with a chorus that goes like this: “Hey, jan, ghapama!” (Hey, dear, ghapama!) The entire theme of the song is to draw attention to a pumpkin so delicious that everyone in the village should come to see it. (The lyrics following “Hey, jan” go on to say “tasty, delicious-scented ghapama!”) It could have been easy for the folk song to drift into obscurity, but it enjoyed renewed attention thanks to Harout Pamboukjian, a Yerevan-born Armenian- American pop singer, who has performed it to sold-out crowds for decades. We’ve found that it’s hard to resist singing the chorus any time this showstopper of a dish is at the table.

Make ghapama in the fall when the largest variety of winter squashes arrive at the market. Small, round pumpkins, such as Cinderella pumpkins, are perfect for the recipe. To cut off the top, it is handy to have pumpkin-carving knives. There are a few ways to approach making ghapama: Push it toward the savory side with caramelized onions, which is what we’ve done here, or leave the onions out and make it sweet with cinnamon. Shake Havan- Garapetyan, the owner of Artbridge restaurant in Yerevan, uses onions but also mixes in a little quince jam or marmalade for a subtle sweetness. (If you’ve made the Apricot Murabba on page 226, you can use the syrup in place of honey.) Ghapama can be served at the end of a meal in place of dessert, though John found that its sweet-savory combination made a perfect side dish for American Thanksgiving. 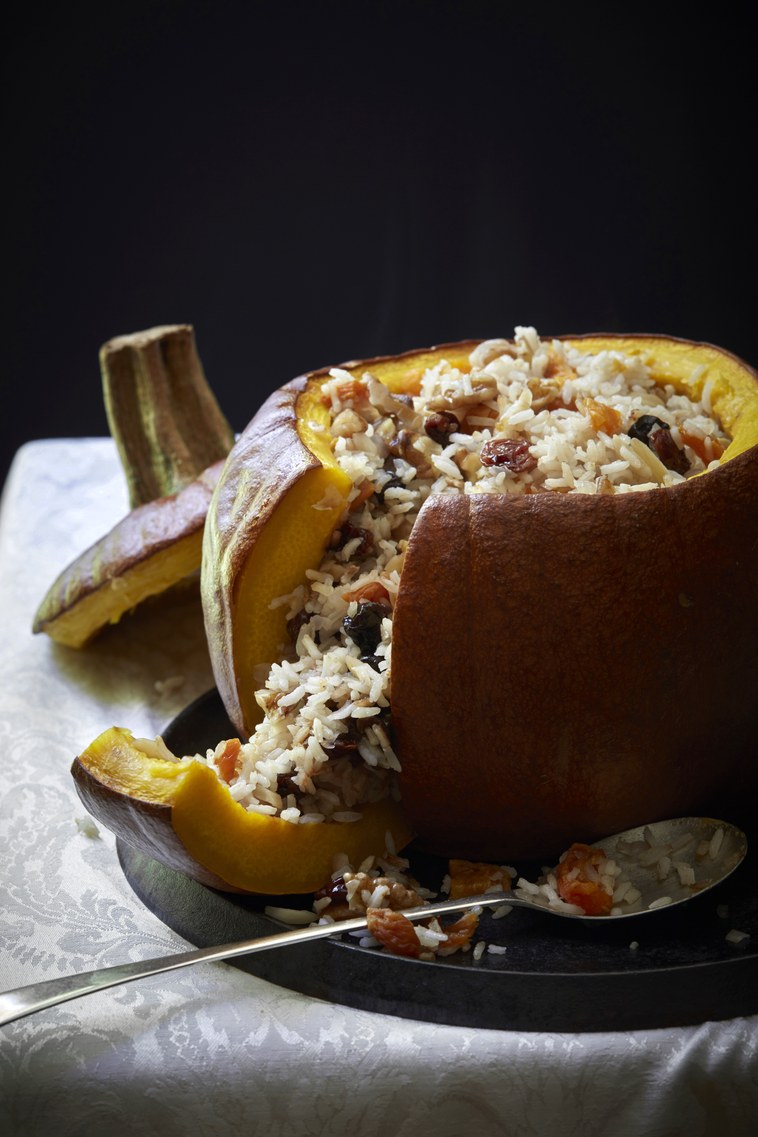 Ghapama. Excerpted from "Lavash: The Bread that Launched 1,000 Meals, and Other Recipes from Armenia" by Kate Leahy, John Lee, and Ara Zada. Photo credit: John Lee

-Arrange the oven racks to fit the pumpkin standing upright and preheat the oven to 350ºF [180ºC]. Line a half-sheet pan with aluminum foil.

-Carefully cut out a wide lid around the stem at the top of the pumpkin as if making a jack-o’-lantern, reserving it to top the pumpkin once filled. Scoop out all the seeds and discard them or dry them out and save for another use. Place the pumpkin on the prepared pan. Season the insides with 2 tsp of the salt, rubbing it into the sides, and then drizzle in 1 Tbsp of the honey.

-In a medium saucepan, combine the rice with 2 cups [480 ml] of the water. Cover and bring to a boil, lower to a simmer, and cook for 10 minutes, or until the rice is almost (but not quite) cooked through. Transfer the rice to a large heatproof mixing bowl. It’s okay if not all the water has absorbed into the rice.

-Give the rice-cooking pan a rinse and melt 2 Tbsp of the butter in it over medium heat. Stir in the onion and sauté until softened and slightly golden brown, about 6 minutes. Add the onions to the bowl with the rice and then stir in the remaining 1 Tbsp of honey, the remaining 1 tsp of salt, and the apricots, sour cherries, prunes, walnuts, and almonds. Stir in the vinegar and taste the mixture, adding a few more pinches of salt, if desired.

-Spoon the rice mixture into the pumpkin and pour in the remaining ¼ _cup [60 ml] of water. Dot the remaining 2 Tbsp of butter on top. Cover the pumpkin with its lid and bake until the insides are hot and a toothpick slides easily into the flesh of the pumpkin, 1½ _to 2 hours, rotating the pan halfway through (use two hands and be careful the pumpkin doesn’t fall over). Let sit for 20 minutes so the rice can reabsorb the liquid. (The pumpkin acts as insulation, so the rice will stay hot.)

-To serve, carefully transfer to a large round platter. Remove the lid and cut the pumpkin into wedges so the ghapama falls open like a sunflower, with the rice in the center. Serve salt at the table for extra seasoning. Leftovers keep, refrigerated, for up to 1 week. To make reheating the dish easier, store cut portions of pumpkin separately from the filling.

In Armenia, saying “let’s eat,” translates to “let’s eat bread.” That’s because bread is the foundation of every meal.

Bill Addison gets his khachapuri and khinkali fix in Glendale

LA Times restaurant critic Bill Addison recently took a trip to a Glendale strip mall, where behind darkened glass, there’s a restaurant serving up a hybrid menu of...

Pro tips on creating the perfect holiday cheese board

The fall and winter holidays are approaching, so you might find yourself wondering what to bring to parties. Writer Thalassa Skinner suggests reviving the art of the cheese...

A top somm is accused of sexual assault. Is the wine industry overdue for a reckoning?

The New York Times recently published a bombshell report by Julia Moskin that hit close to home for some Angelenos.

California isn't known as much for its apples as its citrus, but there are still plenty of great apples to be found at the Santa Monica Farmers Market. Pastry chef Nicole...