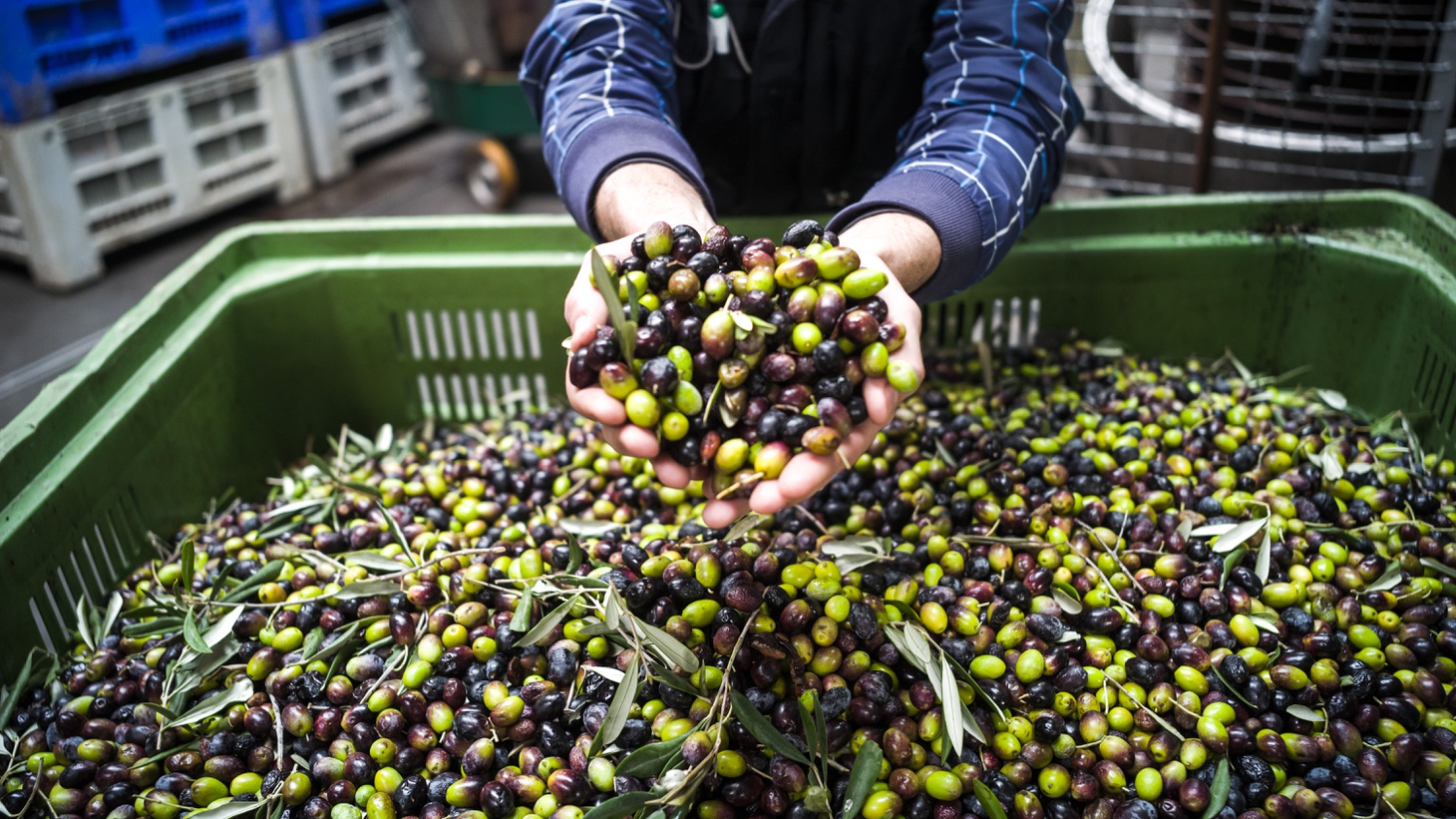 Olives are harvested in the fall to be turned into olive oil at the press. Depending on olive variety, age of tree, and time of year harvested, it takes approximately four to five kilos of olives to make one liter of olive oil. Photo by Shutterstock.

One of my favorite parts of eating in the period from late fall through January involves falling into a vat of olio nuovo, as it is called in Italian, or new oil. It is a fleeting seasonal product that’s bottled and sold immediately after pressing in the late fall or early winter, and meant to be consumed as soon as possible. So after holiday meals conclude, I feast on all manner of salads dressed simply with new oil and salt, and maybe a squeeze of lemon. Bruschetta or great toasted bread, rubbed with garlic then anointed generously with oil, becomes almost a main course when served with a brothy soup. As I write this, California new oils are quickly selling out, so run to buy from the sources below. The oil will still be wonderful when it’s not “new,” but the unique properties of freshly-pressed oil will quickly mellow. 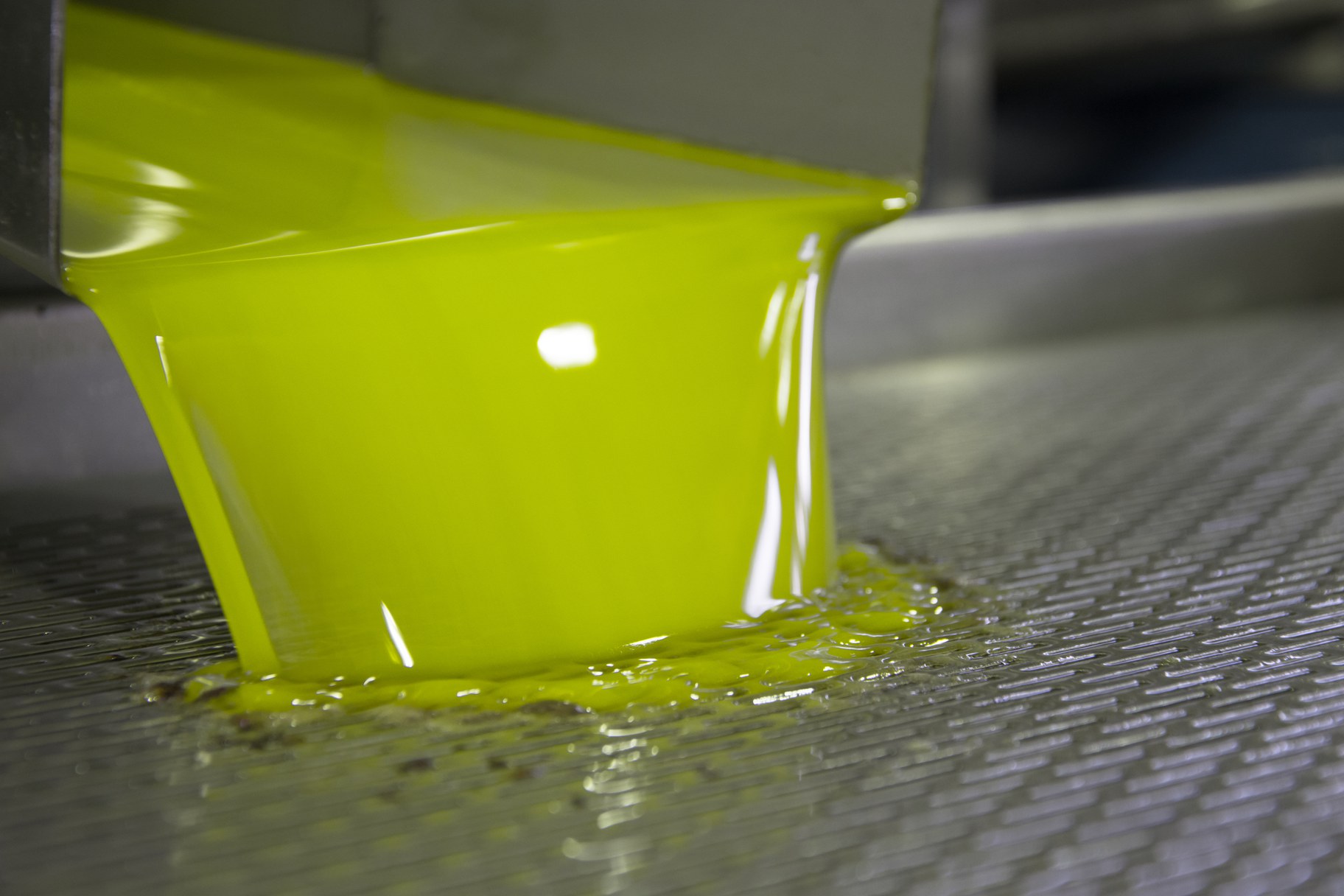 The color of new, pressed olive oil is a startlingly bright greenish-gold. Photo by Shutterstock.

Often new oil is unfiltered, which means there is still some water and micro solids in the “juice,” which gives it a cloudy appearance. The presence of water and solids renders the mixture less stable than a filtered oil, so it should be consumed within weeks or months of pressing. Some makers simply produce their extra virgin oil and market some of it immediately as olio nuovo, which it is. This oil will remain stable for months if kept out of light and heat, and the initial flavor and textural qualities of the new oil will eventually mellow.

Botanically, olives are a drupe – a type of fruit characterized by a hard outer layer surrounding a single seed. They have a thin skin, a fleshy edible part, and a hard pit containing the seed. They are cousins to other drupes, including cherries, plums, and peaches. Like these other fruits, when the flesh of the olive is crushed and kneaded (malaxed), juice flows, in this case the juice is a mixture of oil, water and micro solids. The color of the oil as it flows from the press is a strikingly bright, almost neon green-gold color. Its flavor is bold with many oils having a pepper-like spiciness at the back of the throat.

Depending on the olive varietal, olio nuovo is often described as having a fruity, grassy, or bitter taste, with a slightly pungent aroma. This more pungent flavor is due to the presence of polyphenols, which are found in high concentrations in fresh, unprocessed olive oil. These polyphenols are rich in antioxidants. They are being studied for their anti-inflammatory properties.

For many years, my year-end holiday ritual has involved purchasing olio nuovo to enjoy. It connects me to the seasons and a deep agricultural heritage. Here are a few of my favorite California oil producers who are still selling olio nuovo. Because olives are harvested and pressed at the end of the year these are 2022 oils. 2023 oils will not be available until the late fall of 2023.

Check with your favorite specialty food market to see if they have any left, either from California or Italy, Spain, Greece or Morocco. Look for oils pressed in 2022. Even if not labeled as olio nuovo or olio nuevo they will still be fairly “new.” Some shops I contacted like Surfas and Mr. Marcel are expecting more shipments any day. Many cheese shops also carry the oil.