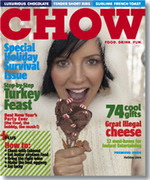 Editor of Chow Magazine online, Jane Goldman, give us an end of the year update:  Highs and Lows of 2006.  She calls 2006 the Year of the Pig, since so many chefs were using pig parts in recipes.  2006 was also a major year for food contamination.  She talks about the television chef craze (Rachel Ray-IN, Mario Battali-OUT, at least in the TV world), and the "self-heating" latte (Wolfgang Puck's invention) which ended up exploding.

Laura Avery finds Armando Garcia of De Luz Farms up to his ears in citrus fruit. He has Satsuma tangerines, key limes, oro blanco and cocktail grapefruits, and pommelos. He...

Suzie Gilbert is the Executive Director and Founder of One Voice . In addition to other programs, One Voice organizes a massive food basket packing operation at the Santa...

Eddie Lin is the Deep End Diner . The "season" for lutefisk starts early in November and is typically served throughout Christmas. Lutefisk is also very popular in...

Baker and cookbook author Dorie Greenspan joins Evan in studio to talk about the holidays and share a wealth of baking tips for making rugelach.

Pink Champagne - Why So Expensive?

Mike Steinberger is a writer for Slate and has recently written an article about the Rose Champagne craze. For reasons that aren't entirely clear, Rose Champagnes have...

Make Mine a Pot Roast

Mark Bittman, author of How to Cook Everything and The New York Times food section’s Minimalist column, tells Evan about his delicious pot roast recipe.

Editor of Chow Magazine online , Jane Goldman, give us an end of the year update: Highs and Lows of 2006. She calls 2006 the Year of the Pig, since so many chefs were...

Glogg Me for Christmas

George Cosette, former wine director of Campanile and co-owner of Silverlake Wine , comes to Good Food to tell us about Glogg -- a Swedish holiday mulled wine.