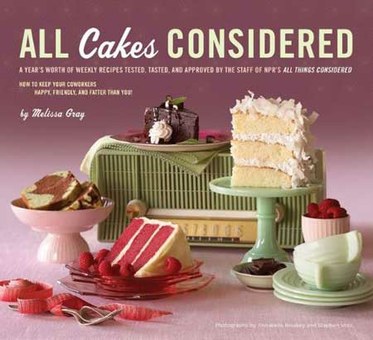 Melissa Gray is an NPR producer and is the author of All Cakes Considered.  She started her book by bringing in a cake each week for her NPR colleagues.  The first cake she brought in was Martha Washington's Great Cake

1) Position a rack so the cake will sit in the middle of the oven, and pre-heat the oven to 250 degrees F.  Prepare the pan.

3) Using the whisk attachment on the mixer, whisk the egg whites to the soft peak stage.

4) In a separate mixing bowl, cream the butter with a handheld mixer.  Slowly fold in a third of the beaten egg whites until incorporated.  Repeat two times, until all the egg whites are incorporated.

5) Slowly fold in the sugar, about 1 cup at a time, until incorporated.

6) Beat the egg yolks lightly (you may use a hand whisk) and fold them in.  Fold in the flour until full incorporated.

7) Fold in the mace, nutmeg, wine and brandy.

8) Fold in the fruits and nuts.

9) Pour the batter into the pan and bake for about 1 hour and 15 minutes, until the cake tests done.

10) Cool the cake in the pan for 10 minutes, then unmold onto a cake rack.

11) When the cake is almost cool, preheat the oven to 200 degrees F and make the frosting.

12) Using a hand mixer, beat together the egg whites and 2 tablespoons of the confectioners' sugar.  Continue adding the sugar, 2 tablespoons at a time, beating after each addition, until you have the incorporated all of the sugar.

13) Add the grated lemon zest and orange extract flavoring.  Beat until the frosting is stiff enough to stay parted when cut through with a knife.

14) Smooth the meringue onto the cake.  Let it dry and harden in the oven for 1 hour.  The frosting will be brittle when cut with a knife.

Cindy Mushet is the author of The Art and Soul of Baking and her new book, Baking Kids Love .     Music Break: Slow Walk - Bill Doggett

Melissa Gray is an NPR producer and is the author of All Cakes Considered . She started her book by bringing in a cake each week for her NPR colleagues. The first cake...

Maureen Evans is a chef living in Belfast, Ireland. She writes 140 character recipes on Twitter. She has a glossary on her website to help decipher her codes...

Lesley Bargar is the food editor at L os Angeles Magazine .  This month, they are featuring a food lovers guide to L.A.

Jimenez Family Farm from Santa Ynez is bringing in fresh goat and lamb meat. Their animals are raised on 100% grass. They recommend non-premium cuts of lamb like the...

Jonathan Gold writes the Counter Intelligence column for the LA Weekly, for which he won the Pulitzer Prize. This week, he reviews Billy's Deli in Glendale . He...

Mara Haseltine is an artist and environmentalist living in New York City. In 2007, Mara collaborated with marine biologists to create solar powered oyster reefs in the...

Liz Thorpe is the author of The Cheese Chronicles: A Journey Through the Making and Selling of Cheese in America, from Field to Farm to Table . She is a vice president at...

Gustavo Arellano is the food editor and columnist for the OC Weekly . He writes the popular Ask a Mexican column. He grew up in Anaheim, California where his parents...