“Huli” means “turn” in Hawaiian, a reference to the grills used to make the iconic chicken dish in Hawaii. Photo by Kevin J. Miyazaki.

To the casual spectator, Hawai’i is the land of kalua pig, plate lunch and poi. For Sheldon Simeon and anyone who was raised on the islands, the cuisine is layered and emblematic of family. Recognizable from his appearances on two seasons of “Top Chef,” Sheldon is back in Hawai’i with his restaurant Tin Roof, his ‘ohana (meaning family), and a new cookbook that he co-wrote with LA writer Garrett Snyder. 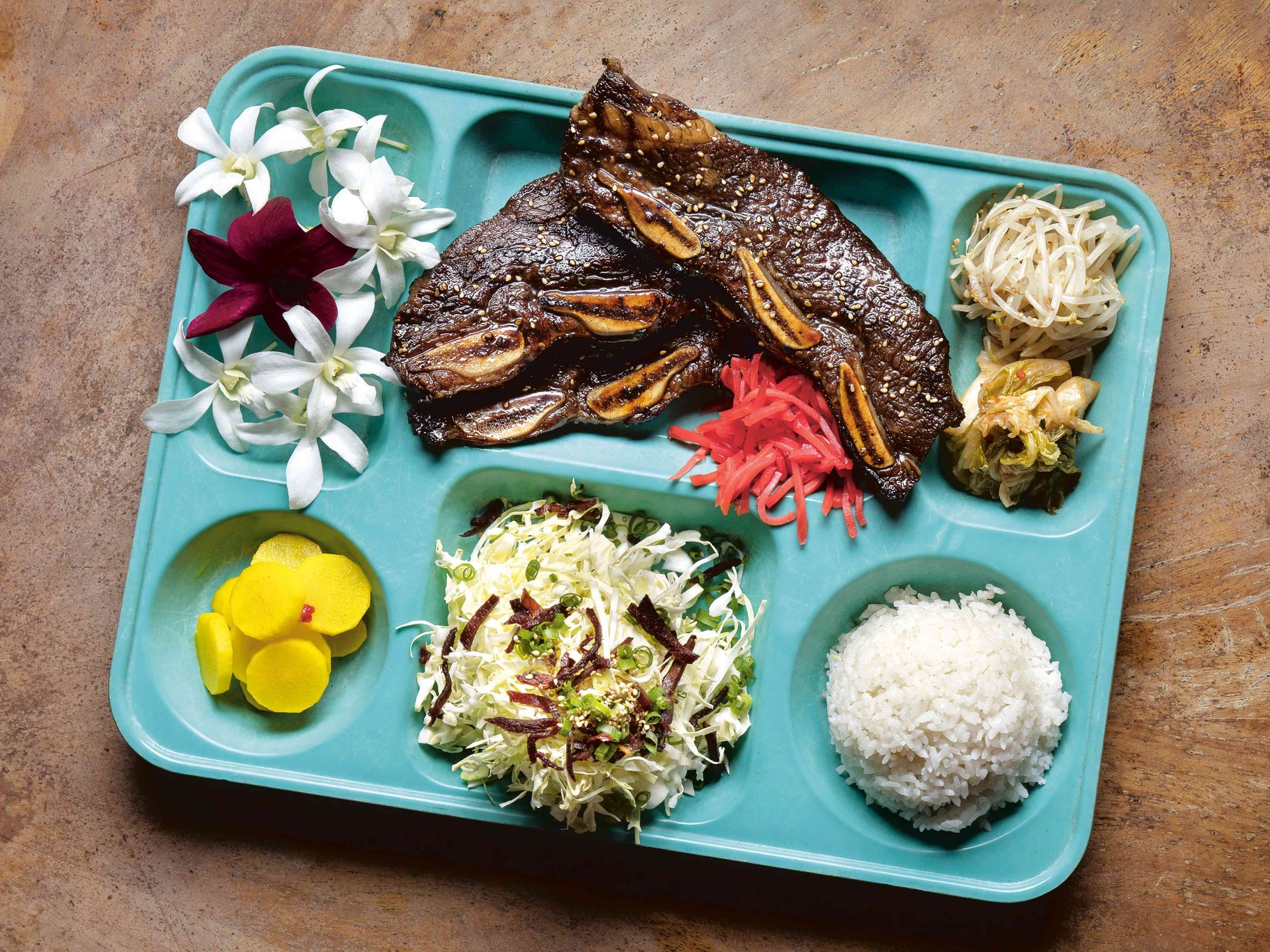 Chef Sheldon Simeon marinates his kalbi for two or 3 full days. He brings the Hawaiian experience to the table in his new cookbook. Photo by Kevin J. Miyazaki. 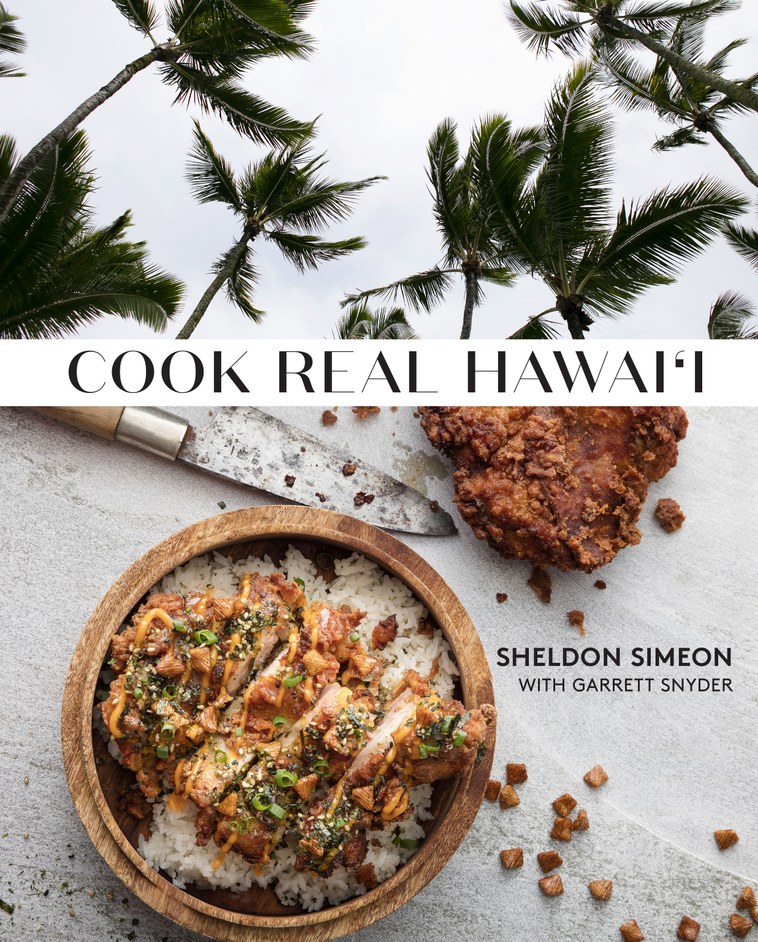 HULI HULI CHICKEN
Serves 2 to 4
Huli means “turn” in Hawaiian, a reference to the special rotating grills used to cook this
local style of rotisserie chicken. Huli huli, so the legend goes, was created by an
enterprising poultry farmer named Ernest Morgad in 1955. In the decades since, it has
become a favorite here, often sold at school fundraisers and stands that set up along
the highway.

During one fundraiser for my high school volleyball team, my dad’s guys
built a huge contraption made from chicken wire and rebar: The chickens were
sandwiched between the wire and cooked over a huge hibachi pit filled with kiawe
wood, which sent up billows of sweet-smelling smoke that perfumed the air for miles.
Recipes for huli huli chicken vary, but most tend to use a general teriyaki marinade with
the addition of ketchup or pineapple for tanginess. When I put huli huli chicken on the
menu at Lineage, the idea was to combine those homey roadside flavors with how
classic roast chicken is often presented at fancy restaurants. I start by coating the
chicken in shio koji, a paste for marinating or seasoning made from fermented rice malt
and salt, which has the dual effect of tenderizing the bird and unlocking a whole
universe of savoriness. (Ready-to-use shio koji paste or marinade is available at most
Japanese and Asian markets, or can be ordered online.)

The second step, which can be done ahead, is to create a sweet-tangy glaze to brush
on the chicken, since the real secret of huli huli is not only the turning, but the repeated
shellacking of glaze that keeps the chicken succulent. To mimic the effect of a rotating
spit, create two zones of low heat and high heat on your grill and flip the bird between
the zones, basting it often to create a glistening browned crust. Also, using a
spatchcocked chicken will help the meat cook evenly.

-Place the chicken on a large sheet pan and rub all over with the shio koji. Cover loosely with parchment paper and refrigerate overnight.
-In a saucepan, combine the chicken stock, butter, oyster sauce, pineapple juice, brown sugar, ginger, garlic, and sesame oil.
-Crush the white parts of the scallions with the butt of a knife and add those, too.
-Bring this to a boil, then reduce the heat and simmer for 30 minutes, stirring occasionally, or until the liquid has reduced by about half.
-Remove the ginger, scallions, and garlic using a slotted spoon or sieve.
-In a small bowl, mix the cornstarch with 2 tablespoons water to make a slurry.
-Stir it into the sauce and increase the heat to bring back to a boil before removing from the heat.
-An hour before you’re ready to cook, remove the chicken from the fridge and let it come to room temperature.
-When you’re ready to cook the chicken, rinse off the shio koji and pat the chicken dry with a paper towel.
-Season the chicken lightly and evenly with garlic salt.
-Preheat a grill to medium-hot.
-Using tongs, oil the grates of the grill with an oiled rag or paper towels. Set up the grill for two-zone cooking: If using coals, push them off to one side of the grill so you have direct and indirect heat. If using gas, reduce the heat to low on one side of the grill.
-Place the chicken, breast-side up, on the cooler side of the grill.
-Cover and grill for 10 minutes.
-Uncover, brush the chicken with sauce, cover, and grill another 10 minutes.
-Uncover, glaze the chicken again, then flip the chicken breast-side down onto the hotter part of the grill.
-Cook over direct heat, uncovered, until the skin begins to brown and char slightly, about 10 minutes, then brush with sauce and flip the chicken breast-side up, still over direct heat.
-Brush the breasts with sauce and continue cooking the chicken over direct heat until the juices run clear or a thermometer inserted into the breast reads 160F (plan for about 40 minutes total cook time).
-Remove the chicken from the grill and let rest for 15 minutes.
-Meanwhile, bring any remaining sauce to a boil (if the sauce is broken, don’t worry, it will emulsify when it boils). Remove from the heat and let cool slightly.
-Slice the chicken and serve topped with some more sauce and the chopped scallion greens.

NOTE: The easiest way to spatchcock a chicken is to have your butcher do it. Otherwise, use a sharp pair of kitchen shears to cut along both sides of the chicken’s backbone (spine), separating it from the ribs. With the backbone removed, turn the bird over so the breast is facing up. Splay out the legs and breasts until they lie flat and give the bird a firm press in the center of the breast; you may hear a crack, and it should lie flat on its own.