Priya Fielding-Singh researched why it is so difficult for Americans to bring healthy food to the table. Photo by Vero Kherian Photography.

Us and them: It's a concept that has taken on various forms for eons, and perhaps nowhere more acutely than around food and nutrition. As we gear up for Thanksgiving, many people take gratitude in having the resources to gather together with food and the luxury of time to navigate its preparation. But as sociologist Priya Fielding-Singh explains in her comprehensive new book “How the Other Half Eats,” stress surrounding food for many American families is far more complex than questions of access or even nutrition. Singh joins Evan Kleiman to discuss the roots of Americans’ unhealthy eating habits, food injustice, and how economic inequality and emotional nourishment affect the American diet.

KCRW: Tell us about this research project that took over your life for a very long time.

The book and the research were really aimed at trying to understand why it's so difficult for families in this country to eat healthy, and why, in particular, it's virtually impossible for low income families to do so. And my reason for doing this research about food inequality and diet disparities across the U.S. came from two places. The first is that we have this wealth of epidemiological research, showing that there's a growing gap in the diets and nutrition between rich and poor in this country, where the rich continue to make gains nutritionally that are not met by their low income counterparts. And this is a gap that's durable, it's growing, and it matters tremendously, because of just how fundamental our diets are to our health. A poor diet is the leading contributor to mortality in the U.S. It's responsible for half a million deaths every year. And so nutritional disparities are extremely consequential.

The second motivation for the book was that, despite our best efforts to understand the drivers of nutritional inequality, our explanations for why we have this dietary gap have in many ways really fallen flat. And the biggest explanation, the one that most folks will recognize, is known as the “food desert” argument — the idea that there are these spatial inequalities in people's access to supermarkets and grocery stores where there's healthy food, and that these inequalities are what are driving broader diet disparities. Food deserts are 100% a thing. ... But the research shows that … it doesn't mean that they're actually the primary driver of nutritional inequality. So my question as a researcher was, what else is driving these nutritional disparities? And my book tries to answer ... that by drawing on the voices and experiences of 160 parents and kids that I spent years speaking with, four families in particular that I lived alongside [with] and observed and tried to understand how their really different circumstances, hardships, barriers, and challenges that they faced shaped the the diet that they were able to secure for themselves and their children.

What it was like talking to so many different people about how they eat? Did it change the way that you personally feel about food, eating, or people?

Yeah. It's hard for me to remember who I was before I did this research, just because I've been interviewing and observing families about the food that they eat for so many years. But some things that stand out to me about what I learned from this was that a lot of my work was really focused on interviewing parents and trying to understand how parents made food choices for their families, for their children, and how the resources that they had at their disposal, often their financial resources, shape those choices.

One thing that was really clear to me was that this belief or understanding that a lot of society has that low income parents and families are ignorant about what's healthy, that they don't care about what's healthy for their children, is just completely false. There was such a consensus across the families that I interviewed, whether it was families who were living in their cars or in gated communities, [that] they understood on a pretty similar level what was healthy. Like no parent told me that they thought that soda or Cheetos were a healthy choice for their child. Everyone agreed that fruits and vegetables were a healthy choice. So what we don't have here is actually a crisis of education or knowledge about what's healthy.

And so even though these parents know that a can of Dr. Pepper is not the most nutritionally sound choice, it's also a very emotionally nourishing choice for their children. So what makes perhaps little sense from a public health perspective makes a lot of sense from a psychological perspective, if you take into account the really different contexts that parents are raising their kids in. And that's something that fundamentally changed how I thought about food — thinking about the kind of psychological, symbolic, and emotional meanings that food takes on across class and race, and how those impact food choices.

I was really struck by a woman named Latisha in your book talking about how the sandwiches she was given as a child raised in poverty were basically two pieces of white bread with luncheon meat. And that the sandwiches she makes her children are made out of bread that's more nutrient dense, and includes vegetables like tomato or lettuce. And for her, this reveals a whole different change in status.

Absolutely. Latisha grew up pretty poor in a low income family, and she made it into college and the upper middle class. And for her, food and feeding her kids was really a way that she showed that she had made it. It was a way that she identified as someone who had achieved social mobility.

And so she couldn't imagine feeding her kids the food that she herself had been raised on, because to her that would have reflected, in some ways, a decline in social mobility. And she wanted her kids to be squarely in the upper middle class, and to eat and act like it. And she wanted them to grow up with certain values around food that she did not, but had to fight for and go through a socialization process to learn about and eat as she got older and moved up in class status.

I think we live in a country that is really outcome driven. When we evaluate kids’ well-being, their health, we look at metrics like weight, height, BMI. We don't really pay attention to what's going into those outcomes, to the work and inequalities that shaped those really different outcomes. When we talk about something like the childhood obesity epidemic, or disparities in children's weight, we make the assumption that [parents of] kids who are overweight or obese don't care about feeding them as much, that their parents are negligent about their diet.

We don't consider that perhaps those parents are trying just as hard to raise healthy kids who like fruits and vegetables, who are active, but that they have the deck really stacked against them in a way that makes that impossible. And on the other end of the spectrum, we look at wealthier parents with a lot of privilege whose kids are maybe more in the normal weight range, and we applaud them and say they're doing a great job and [that] they're feeding their kids the way that they should be. We don't think about all the privileges and advantages that those parents have in order to secure nutritious food for their family. 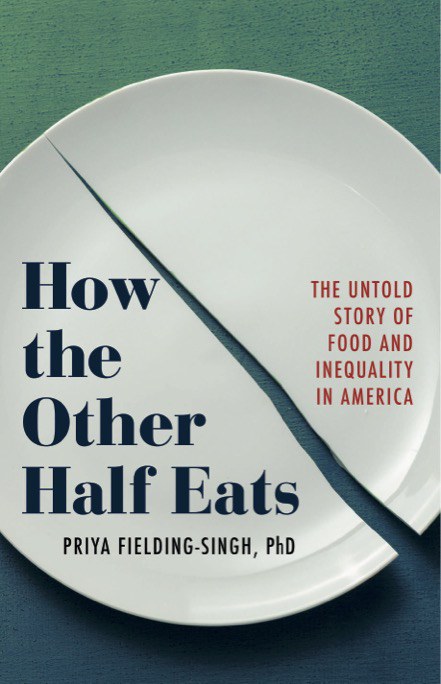 The gap between the wealthy and their low-income counterparts is growing and is focal research behind “How the Other Half Eats.” Photo courtesy of The Countryman Press.