“Wildman” Steven Brill is an expert at foraging for wild food in one of the most unlikely places:  New York City’s Central Park.  When arrested in 1986 for “destruction of park property” (for picking and eating a dandelion on a jaunt through Central Park), Brill publicized the arrest, the city dropped the charges and the parks department hired him.  He now teaches classes and organizes educational tours explaining the medicinal and edible plants found in the park.  He shares how he became interested in eating wild foods, the reactions from his tours and the best eats from the flora of Central Park. 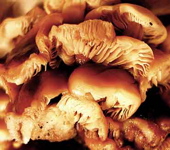 While preparing to write her book, Eating Between the Lines: The Supermarket Shopper's Guide to the Truth Behind Food Labels , author Kimberly Lord Stewart, her husband and...

Laura Avery talks to Tony Peltier of Ladybugs Forever about natural pest control. Worm casings are rich in nutrients and work as a natural repellent to white fly, aphids...

Jonathan Gold visits one of the most dependably delicious sushi restaurants in Los Angeles, Hiko Sushi. The restaurant has strict rules -- patrons must order a minimum of...

The recent pet food scare has shed light on both the human and pet food supply. Marion Nestle talks about food contamination: what’s happening and why it’s getting worse,...

“Wildman” Steven Brill is an expert at foraging for wild food in one of the most unlikely places: New York City’s Central Park. When arrested in 1986 for “destruction of...

If you are what you eat, then what about the animals we consume and their diet? Can it affect us? Nicolette Hahn Niman is an environmental lawyer and the wife of rancher...

While touring on the road, a common lament for band members is “I’m tired and I’m hungry and I can’t wait to go home.” When truck stops and roadside diners no longer fit...