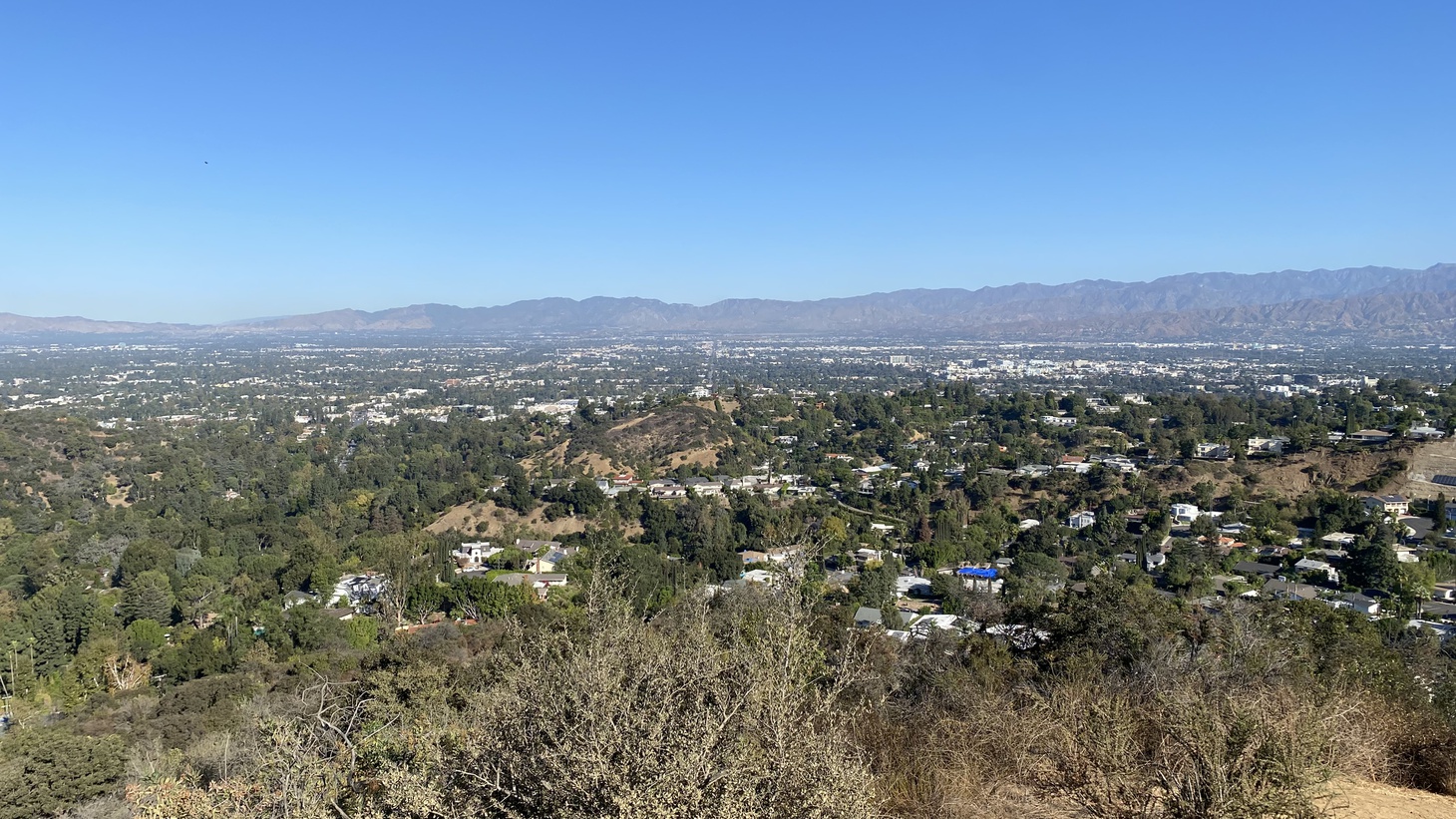 The San Fernando Valley sprawls north of Mulholland Drive. Thanks to redistricting, for the first time this year, there will be an LA County supervisor who represents most of the Valley. Photo by Saul Gonzalez.

When it comes to a Los Angeles election, the mayoral race — pitting such candidates as Congresswoman Karen Bass against billionaire mall developer Rick Caruso and others — is getting most of the attention from voters, pundits, and the media.

But there’s another competitive race happening right now that you might know nothing about, even though it’s arguably as important — maybe even more important — than the campaign for mayor. That’s the race to fill the seat in Los Angeles County’s Third Supervisorial District, stretching from Santa Monica and West LA to communities in the far northern San Fernando Valley.

Whoever wins the seat, now held by departing incumbent Sheila Kuehl, will become one of the most powerful elected officials in California, one of five supervisors governing a county of 10 million residents and administering a nearly $40 billion budget. That’s larger than the combined state budgets of Kansas, Montana and Vermont.

But the county’s exact powers compared to the state and local city governments can often be confusing to the general public.

“As far as this hierarchy and what everybody does, I'm clueless, man, I don't know,” said voter Steve Thornton when asked about county supervisors. Thornton showed up for a campaign event for candidate Henry Stern on a recent Sunday morning in Santa Monica’s Clover Park, where he acknowledged that despite his support for the candidate, he didn’t know much about the scope of county government or the authority of its supervisors. He said he was here because his SEIU union local has endorsed Stern.

“I'm just a simple guy. I do my job. I do my part,” said Thornton. “And hopefully they do their part, man. That's it. You know what I'm saying?”

The face-to-face campaign event was unusual in this nearly invisible race, where there have been few non-Zoom political forums.

It was hosted by Stern, a Democratic state senator who’s considered one of the top three candidates running for the district seat. The other top contenders include State Senator Robert Hertzberg, long a fixture in Sacramento politics, and West Hollywood City Councilmember Lindsay Horvath. All are registered Democrats. 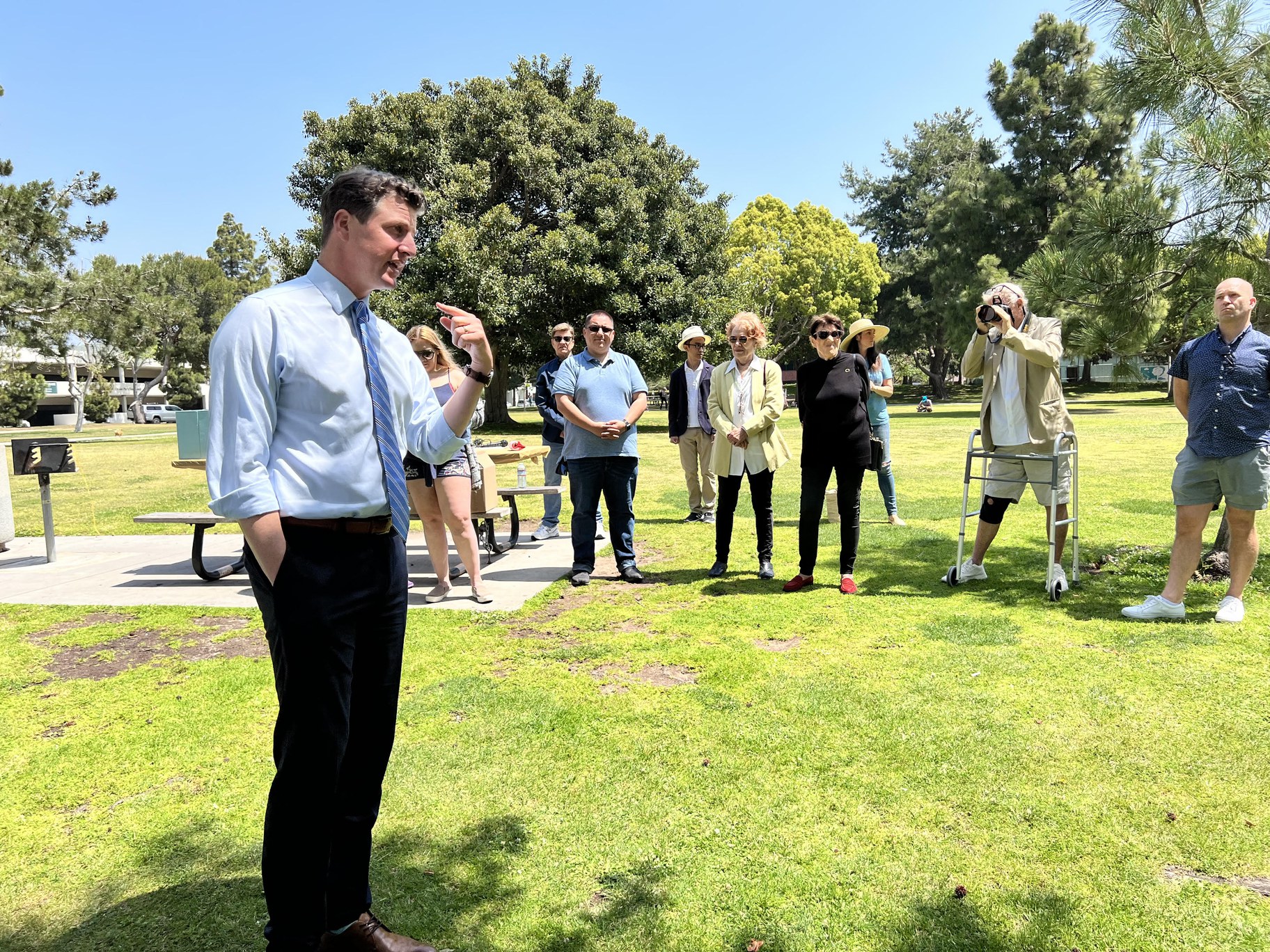 In one of the few face-to-face voter events in the lowkey campaign  for the Third Supervisorial District, State Senator Henry Stern, a candidate, addresses supporters in Santa Monica. Photo by Saul Gonzalez.

Stern says his current job as a state senator might seem high-profile, but being in Sacramento, he says it can’t compare to the clout of LA County supervisors and their ability to affect people’s lives and welfare.

“I want to do the job with the most amount of power to help people, with the least amount of fluff,” Stern told KCRW at the park. He calls the job of county supervisor “secretly the most powerful job in all of LA.”

And Stern's views are echoed by someone who used to have the job.

“The County of Los Angeles and the County Board of Supervisors is a place where virtually every issue that matters to the general public crosses your desk every day,” said Zev Yaroslavsy, who was an LA County supervisor from 1994 to 2014, representing the same district that Stern, Hertzberg and Horvath are running to represent now.

Yaroslavsky believes that historically a lot of people, especially middle-class voters, haven’t grasped the importance of county government and its services to millions of people — services that can literally mean the difference between life and death.

“The county is the human service arm of our society,” he added. “They deal with the people who are economically marginalized. The poor, people who are coping with mental illness, children who have been abandoned by their parents, the foster care program, adoptions, mental health, public health, criminal justice, the jails. The overwhelming majority of the budget of the county is for people at the lower end of the income spectrum.” 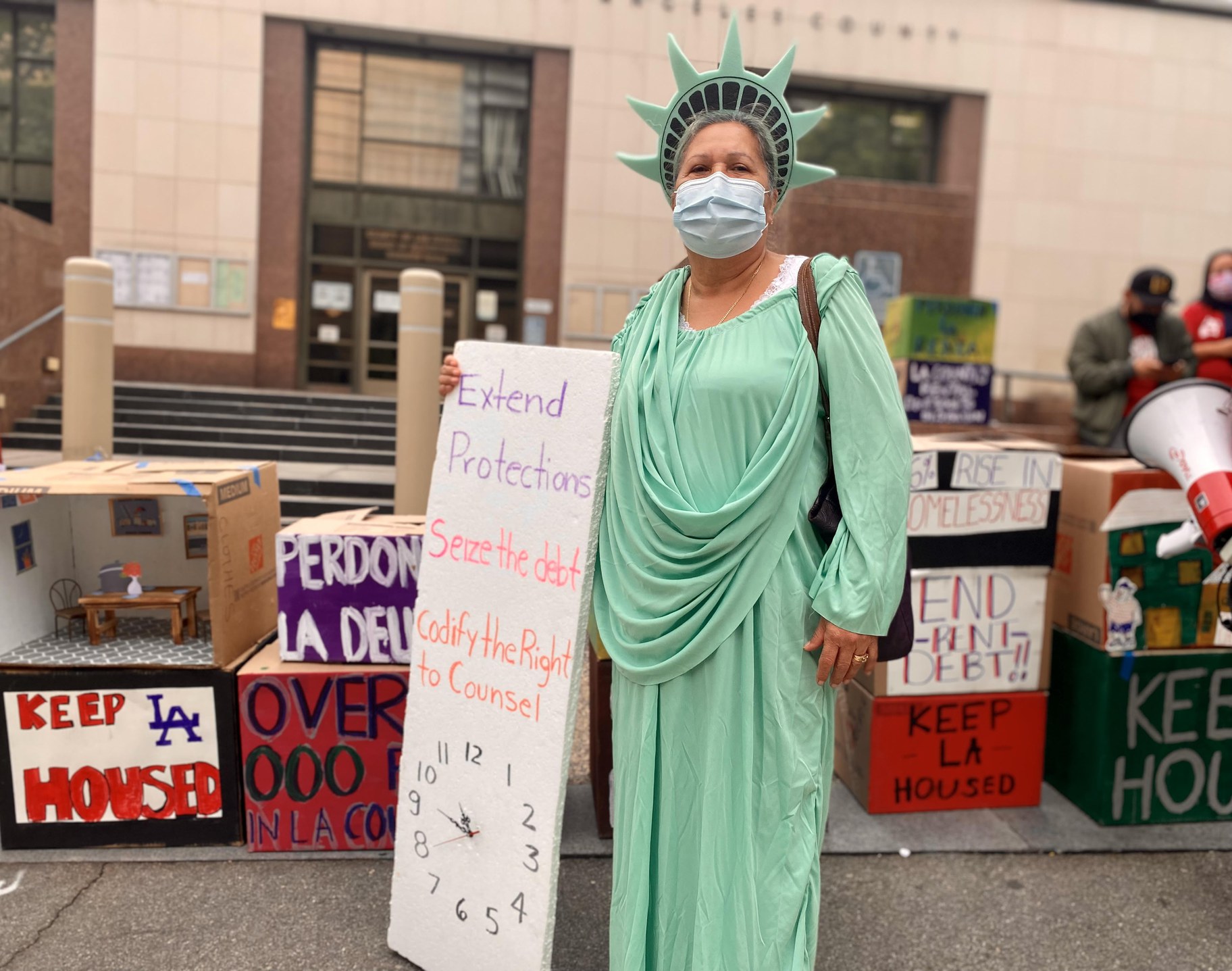 County government is often at the center of some of the region's most contentious issues. In September of 2021, a protester outside of the County Hall of Administration called for more action on affordable housing and pandemic rent relief for LA County residents. Photo by Saul Gonzalez

These powers have also placed LA County government and the supervisors squarely in the middle of some of the biggest and most controversial local issues of our time, like the public health response to the COVID pandemic and how best to help tens of thousands of homeless and mentally ill on the streets.

Even less well-known to a lot of voters than the powers of LA County supervisors is the fact that the borders of county supervisorial districts were redrawn last year by an independent citizens redistricting commission.

That means the Third Supervisorial District that Stern, Hertzberg and Horvath are vying to lead now includes more of the San Fernando Valley and less territory south of the Hollywood Hills than in years past.

“It’s a district that’s more Valley, more moderate, less Westside, and more libreral” than it used to be, said Raphael Sonenshein, executive director of the Pat Brown Institute for Public Affairs at Cal State LA and an expert on county government.

Sonenshein says to win, the supervisorial candidates running must do well among Valley voters, who have historically felt marginalized by LA leaders. In 1977 and again in 2002, Valley residents even tried to secede from the city of Los Angeles.

But Sonenshein says the San Fernando Valley of today isn’t the Valley of a generation or two ago.

“For a long time, it appeared to be kind of a white, middle-class community at odds with the growing metropolis of all of Los Angeles,” said Sonenshein. “But that narrative doesn't hold quite as much anymore. For one thing, a majority of the population is non-white. In the Valley, in the northeast San Fernando Valley, it’s overwhelmingly Latino. So I think when we only think of the Valley's complaints as being about white suburbanites alienated from urban Los Angeles, that's a fairly old story. I think that's part of the story, but it is not the whole story.”

That’s why, Sonenshein says, the top candidates for the third supervisorial district all have similar progressive agendas, like fighting climate change, creating supportive housing for the homeless and championing strong pro-union policies.

Election day is June 7. If a supervisorial candidate doesn’t get more than 50% of the vote, the two top candidates will square off against one another in a runoff election in November.