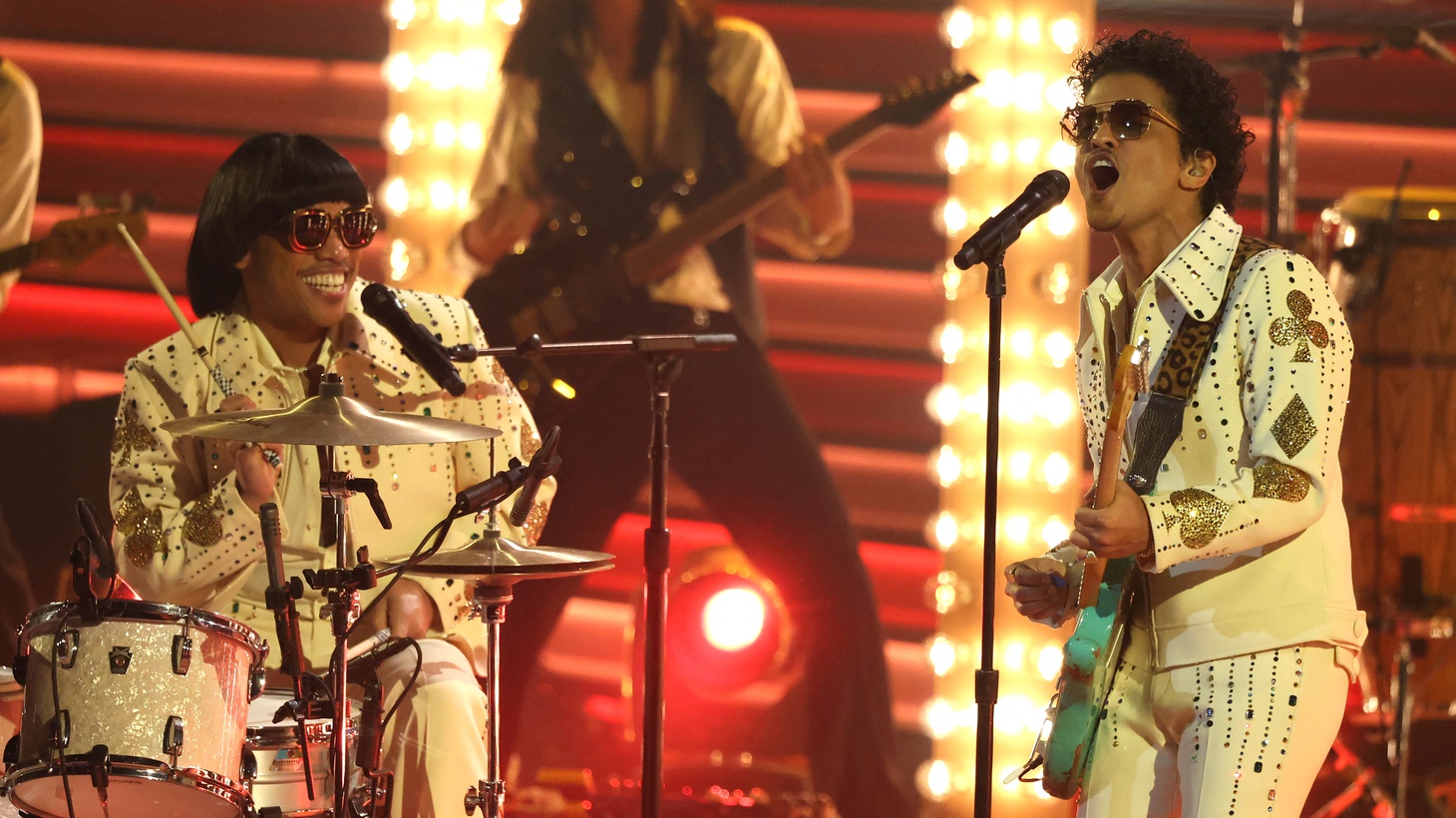 The 64th Annual Grammy Awards took place Sunday night in Las Vegas, helmed for the second year in a row by comedian and “Daily Show” host Trevor Noah. It was originally scheduled to happen in Los Angeles on January 31, but was pushed and relocated due to a surge in the COVID-19 Omicron variant.

While the 2021 awards ceremony had an experimental outdoor format, this year’s event returned to stadium-spectacle pop maximalism. The long front-loaded telecast had relatively safe programming choices, and it ran out of steam by the night’s end.

“​​Don’t even think of it as an awards show,” Noah declared early on. “This is a concert where they’re giving out awards.”

Indeed, just nine awards were given out over the nearly four-hour telecast, which featured performances from nominees including Rodrigo, Silk Sonic, J Balvin, BTS, and more. Like the previous weekend’s Oscars, the Grammys minimized the number of main telecast awards in favor of more entertainment programming to help combat flagging ratings. The stripped-down 2021 Grammys were the award show’s least-watched in history, down by more than 50% from its last pre-pandemic telecast. Sunday’s awards narrowly avoided the same fate, enjoying a modest uptick of about 130,000 viewers.

“It certainly felt all about putting the ‘big’ back in Music’s Biggest Night, and they really leaned into a very pop-forward lineup,” says Andrea Domanick, KCRW’s digital music and culture producer. “They were very much making a play for showing and not telling, as far as not having too much bloat or too many awkward or cringey [talking] moments.”

In lieu of more on-air awards, the Recording Academy added outdoor live performances from artists nominated in traditionally untelevised categories, such as Christian, Gospel, and Bluegrass, which could also be viewed in full on the Grammys website. The telecast also shined a light on the music industry’s behind-the-scenes workers, inviting members of artists’ production crews to present their boss’ live performances.

Batiste’s sweep upended predicted wins from the likes of Rodrigo, Billie Eilish, and Justin Bieber, surprising critics and audiences, given the album’s minimal reviews in mainstream publications and a peak position of 86 on the Billboard 200 chart.

“It felt like the Grammys reverting to the older days when it was by the industry, for the industry, and maybe a little bit more out of touch with the more dynamic trends of the music industry,” Domanick says.

Among the night’s few big surprises was a pre-recorded video appearance from Ukrainian President Volodymyr Zelensky: “Our musicians wear body armor instead of tuxedos. They sing to the wounded in the hospital. Even to those who can’t hear them. But the music will break through anyway. We defend our freedom to live, to love, to sound. We are fighting Russia, which brings horrible silence with its bombs. The dead silence. Fill the silence with your music. Fill it today, to tell our story.”

The appearance, which was followed by a performance from John Legend accompanied by two Ukrainian artists, came shortly after Oscars producers rejected Zalensky’s request to appear on that award show’s telecast

“There's a long-standing tradition of separation of church and state with award shows, and this shattered that,” Domanick says. “Maybe this was about it being a time to lean in rather than escape. Award shows are traditionally a time for escapism, and last night's Grammys, aside from Zelensky’s speech, was very much about escapism.”

The evening’s only other sombering note included a video montage tribute to the late Foo Fighters drummer Taylor Hawkins, who died while the band was on tour in South America on March 25. The rock heavyweights had been scheduled to perform at this year’s Grammys, and while the band went on to sweep their three Rock category nominations, they made no appearance at the ceremony.

Rapper Kanye West, who was scheduled but then barred from performing due to “concerning online behavior,” nonetheless took home two awards, breaking the record for the most wins by a hip-hop artist. That news was soon overshadowed by the announcement that Ye, as the artist is now known, had dropped out from his two scheduled headlining performances at Coachella just two weeks ahead of the Southern California festival.

“Why he's doing it is anyone's guess,” Domanick says. “This comes on the heels of a slate of behavior that included him getting banned from Instagram and making some controversial comments about his ex, Kim Kardashian, and his family. I imagine this is going to be a big headache for the Coachella organizers to have to slot in a third performer last minute.”