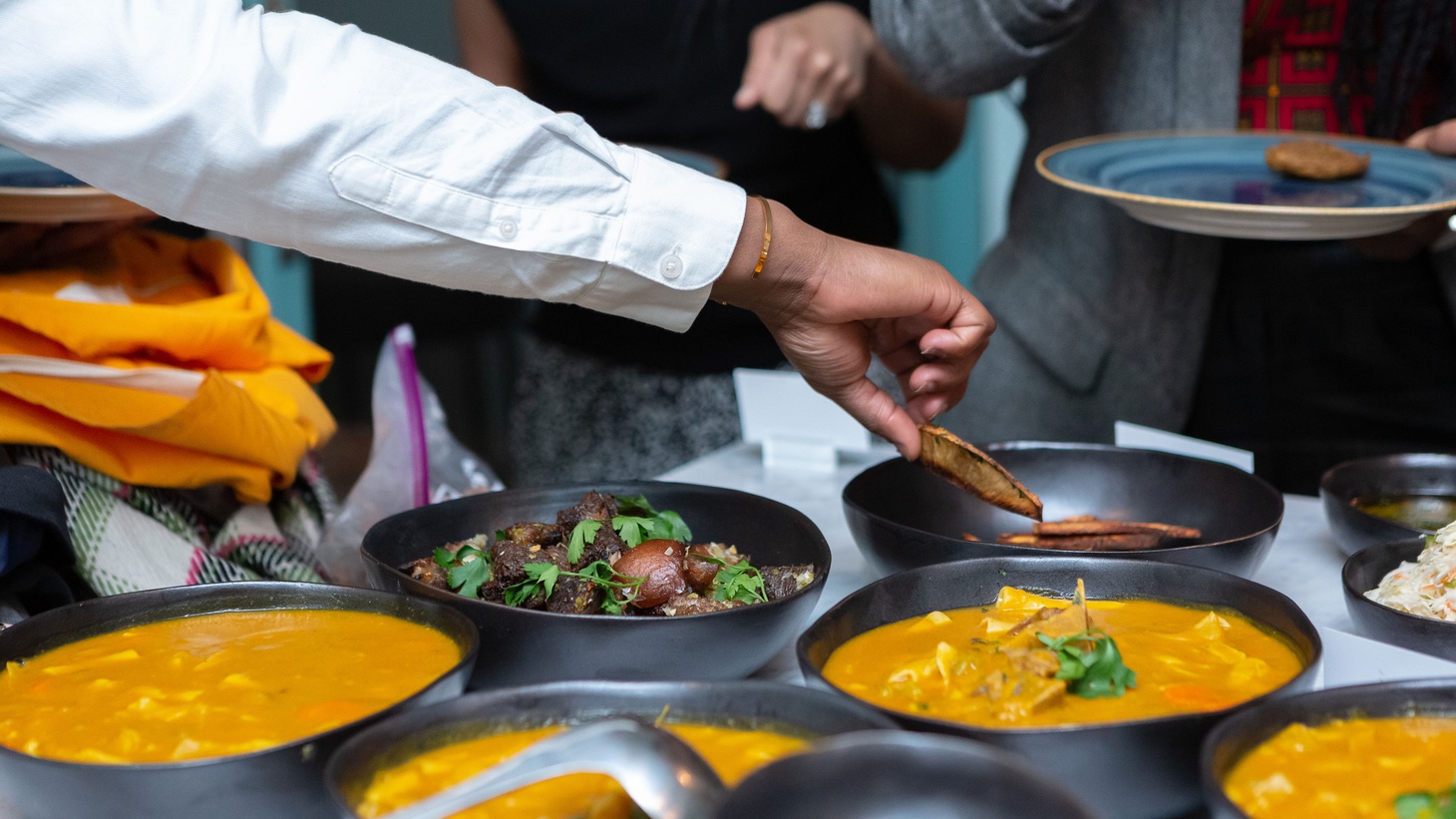 Squash is the backbone of a soup joumou recipe and every Haitian household has its own version. Photo by Paula Ortiz.

For Haitians, there is one dish above all others that represents liberation: soup joumou. It's the official dish of Haiti's Independence Day which is celebrated on January 1. The soup, however, is enjoyed all month long. Soup joumou is so important to Haitian cuisine that in 2021 it was added to UNESCO's list of the intangible cultural heritage of humanity, Haiti’s first inclusion on the list.

Cybille St. Aude-Tate, a Haitian American chef and author who's based in Philadelphia, reflects on the importance of soup joumou.

KCRW: Let's start with a little history. What does Haitian Independence Day celebrate? What's the backstory?

Cybille St. Aude-Tate: Haiti was enslaved by the French. Legend has it that in August of 1791, the enslaved Africans on the island along with some of the Maroon Africans hiding in the mountains, decided to come together to concoct a plan to overthrow the French. What resulted after over 10 years of fighting was Haiti defeating the French on November 18 1804. As a result, we celebrate our Independence Day on January 1. It's always been an important date, an important aspect of Haitian history and culture. That was emphasized to me as a child growing up to Haitian immigrants. But as I got older, and I met more people throughout the diaspora, it’s a symbolism for the entire Black diaspora as the one moment in history when the slaves successfully overthrew their masters.

Why did soup joumou come to celebrate freedom for Haitians?

During enslavement, the French decided that slaves were not allowed to consume soup because it was deemed too civilized. The slaves were able to make the soup, they were able to prepare the soup, but they weren't allowed to participate in the consumption of the soup. So as a result of our independence, our leader and the first emperor of Haiti Jean-Jacques Dessalines made a decree that, from that day forth, we are going to consume soup – all the soup till the end of time, as sort of a defining moment in saying that we were successful in acknowledging freedom for ourselves acknowledging freedom for our people in our country. And that's been the case.

It’s been centuries and generations of Haitians of people of Haitian descent participating in this very rich cultural tradition of consuming this soup on January 1. I didn't know much growing up about Haitian culture, because I was the only one born in the United States, but what I did know from an early age was that on January 1, I was eating that soup, and I was eating that soup for a week straight. We would make so much of it.

Is the soup just relegated to January or is it eaten during the rest of the year?

Traditionally, especially in Haiti soup joumou was enjoyed on Sunday for breakfast. But there's something about that January 1 soup that is just magical beyond recognition. It’s really something to know that you're not only eating the soup, by yourself or within the people within your household or your family – but there's millions of people around the world that are also participating in this practice. It's very spiritual, it's very magical in that sense.

What ingredients does the soup absolutely need to have to be considered correct and traditional?

The original recipe that was created by Marie-Claire, Dessalines’ wife, did not include meat, and it  did not include pasta. These are some of the things that we've seen now have kind of turned into staples for the soup. Everyone is different, and every household operates differently. Depending on where you're from in Haiti, you might use certain ingredients that other people don't use. But first and foremost the soup would include squash, a nice pumpkin, or very vibrant orange squash has to be the base of this soup, and it has to be pureed so that it turns into the velvety broth that holds the soup together. Another element that is super important is parsley or cilantro, onion, scallion, scotch bonnet pepper, cloves – these are all ingredients that are very indigenous to Haiti and very prominent throughout Haitian cuisine and throughout the Caribbean. But you can add anything you want. I see some people put seafood in it, they put chicken in it, they put crab legs in it, you can really add anything you want to the soup, so long as you have the foundation of that squash in the soup.

Is there any kind of spice blend or spice mix that's very important to the soup?

So in Haitian cuisine, we have a green seasoning called epis. And it is a wonderful blend of aromatics of garlic, scallions, onion, lime juice, orange juice, parsley. It really brings together – all the flavor bases of Haitian cooking. You puree it down and use it to marinate your meats, use it as a flavor base for rice, or even for certain soups and stews. That's the one thing that I would say is really important in being able to capture the essence of the island in the soup is the marrying of all those aromatics of all those varying flavor parts that were not in the original recipe. It's something that over time has developed and become a staple throughout time. If you're going to make the soup in the present day, that's one of the things that will take it over the top and give you that authentic flavor.

Do you serve anything with it? Are there traditional carbs that go on the side, like bread of some kind?

If you're putting pasta in it, you're getting all the carbs you need but typically a lot of folks do like to eat their soup with bread. Haitian bread is called gro neg. That literally translates to “big guy.” It is a hard-dough bread that is very popular to eat for breakfast with coffee. Then on the island, if they're going to serve the soup, more than likely they're serving with bread. But again, you know you got all the carbs in the world if you're putting in two different types of pasta in your soup.

In 2020, Bon Appetit published a recipe from chef Marcus Samuelsson who isn't Haitian, for what they called soup joumou. It upset a lot of people. Can you tell me why and what happened after the outcry?

Being that this is one of the most important culinary traditions, it's really important that the soup gets the respect it deserves. That if it's going to be put on a mainstream platform, or it's going to be put out there for widespread consumption, for folks that are outside of our culture, it's really best practice to make it as close to the tradition as possible, in hopes of really being able to tell that story of liberation, and being able to continue to tell the rich history of Haiti and to kind of shine light on some of the injustices as a result of our of gaining our independence in 1804.

The recipe came out. I remember it was such a big to-do in the culinary scene, but especially online with a lot of the Haitian blogs, and a lot of the folks on social media were outraged. It wasn't as if there were various elements – you might have had pasta, or it might have had chicken versus beef – that recipe really kind of shifted completely from what the original recipe was. For us, it was seen as a lack of an opportunity to really be able to connect the dots back to Haiti and to connect the dots back to sharing a narrative of legacy and of prominence to the island that we haven't been able to really receive.

Oftentimes, in mainstream media, the first narrative you hear of Haiti is that it's the poorest country in the Western Hemisphere, and that there's corruption in government and that the earthquake happened and so many people passed and, and it's truly poor. And all these things are true. And, and there's a litany of reasons as to why Haiti has been destabilized to this point. But one thing that we take pride in it's our food, cultural traditions, music, and our artwork. Being able to tell those stories is super important and needs to come from Haitians and people of Haitian descent that can connect to these stories and really drive the point home of Haiti's importance to the world. 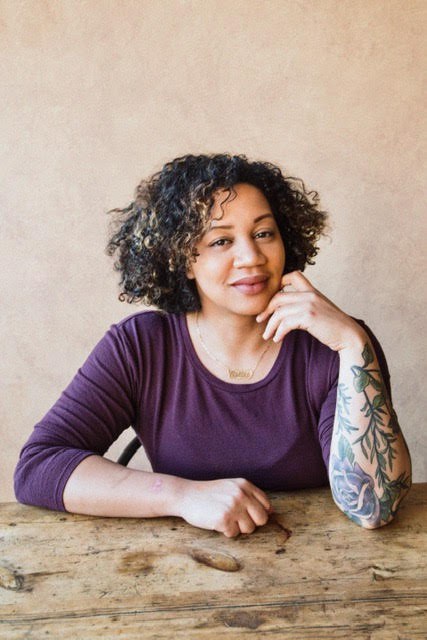 Cybille St. Aude-Tate explains the backstory of soup joumou and its ties to Haitian independence. Photo by Se Young Au.