Turn a burnt piece of toast into fine crumbs for meatballs, or use it to thicken a soup, or add it to an onion panade (a lasagna-like dish), suggests Cal Peternell. Photo courtesy of Shutterstock.

Kitchen mistakes: Whether you’re a home cook or a Michelin-starred chef, we’ve all made them. In real life, sometimes you reach for the salt instead of the sugar. Or a teaspoon gets swapped for a tablespoon. What to do when the inevitable happens is perhaps one of the most important, and least talked about, facets of cooking.

“A mistake is a bad thing only until it is fixed, at which point it becomes not only good, but magic,” says chef and author Cal Peternell. “Mistakes are the swept up stardust that success sparkles with.”

Peternell is all about taking inspiration from disappointment. Why throw away burnt toast, for example, when you can blend it into a grind for meatballs, thicken soup, or make a simple onion panade? Peternell’s new book, “Burnt Toast and Other Disasters: A Book of Heroic Hacks, Fabulous Fixes, and Secret Sauces,” delves into the world of possibilities behind everyday culinary snafus. He joins host Evan Kleiman to discuss the work and other tricks for remedying kitchen disasters.

KCRW: You live in the Bay Area and have been the chef at Chez Panisse for a couple of decades. It's pretty easy for folks like us to access optimal ingredients. What was the circumstance that made you cook outside of your bubble like this?

Cal Peternell: “Primarily it came from when I would travel, visiting family or on vacation, and I didn't have the amazing access that I usually have here. I would try and do my usual, ‘I'm going to cook for everyone.’ And that means it starts at the market. And I go and see what looks good. But I realized, well, what if nothing really looks that good, then what do you do?

So I started to try and figure that out.

I also felt like it's a book about mistakes. And sometimes it's the mistake that you made because maybe you burnt the toast or you overcooked the rice. But sometimes the mistake was that the ground beef has been sealed up in a package for a little too long. And it's not gone bad, but it's just not great anymore. Or maybe the only vegetables you could get were the same old ones you always get, or maybe they were good vegetables, but that was like a week ago. And now you've got them and you've got to make something great.”

Talk about this onion panade and the options for burnt toast.

“Panade is a dish that I've made for many years. I learned from one of my former colleagues, Russell Moore, who now has a wonderful restaurant here in Berkeley called The Kebabery. Panade is almost like a lasagna that you make with bread instead of pasta. You sort of layer toasted bread with flavorful ingredients, and then you bake it and it all comes together.

The one I have in here is just a really simple version where you're using ... some bread that's a little bit too burnt, or maybe you toasted it yesterday for something and now it's still around and it's kind of stale. You can layer it with lots of onions that you've cooked and a little bit of cheese, if you want, and some herbs, if you've got them. I like to pour a really good chicken stock over it. You bake it and it's just one of those things that is better than the sum of its parts. And then I have another option where instead of just using a stock, you use a kind of a custard mixture of cream and milk and eggs.”

If you have homemade stock, make panade. The onions, well-cooked but not browned, counter the bread’s overtoastiness.

-Heat a large skillet over high heat and add the oil, then the onions and ½ teaspoon of the salt. Stir until the onions get going, then reduce the heat to medium and cook, stirring occasionally, until the onions are soft and very lightly browned, 15 to 20 minutes. Cover with a lid or add a splash of water if the onions color too much before getting soft. Add some black pepper and the thyme or sage, if using, and cook a minute more. Set aside.

-Heat the oven to 400 degrees Fahrenheit.

-Bring the stock to a boil in a large pot over high heat, add the remaining ½ teaspoon salt, and keep hot over low heat while you build the panade. Brush a 3-quart baking dish or casserole or a large cast-iron pan with oil, and then fit in a layer of bread, breaking up the slices as necessary to fill in any gaps. Arrange a third of the onions over the bread and sprinkle with a quarter of the cheese. Repeat until there are four layers of bread and three of filling (set aside the final quarter of cheese). Press the layers down with your hands and then pour in enough hot stock to just reach the top layer. Cover with foil and bake until very hot in the middle, about 45 minutes.

-Remove the foil, dot with butter, sprinkle with the remaining cheese, and return to the oven until bubbling and browned on top, 25 to 30 minutes. The panade should be quite wet under the top crust, almost soupy. Add leftover hot stock if needed to make it so.

-Scoop into bowls and eat hot.

From Burnt Toast and Other Disasters: A Book of Heroic Hacks, Fabulous Fixes, and Secret Sauces by Cal Peternell. Copyright © 2021 by Cal Peternell. Reprinted by permission of William Morrow, an imprint of HarperCollins Publishers.

What hacks do you recommend for mushy rice?

“I have a couple of them. One is that you can make a rice pudding. I like this one where I mix ginger and coconut milk in, and you can either eat it hot or you can let it get cold, which is what I prefer. And then the other one that's really fun is rice pancakes. You mix in some flour and a little baking soda, and then I like to put in lots of turmeric because it makes it a beautiful color. And [you can do] other spices like cumin and paprika, scallions and egg, and then you just fry them up just like you would pancakes, but they're savory. ... I usually have a jar of some kind of mango pickle or lime pickle in the back of my fridge that tastes great with those, and they're good as  a side with meat, chicken, or other vegetables. They're also good as a little hors d'oeuvre kind of thing. You can make little tiny ones and just pop them in your mouth.”

What are some ways to jazz up the blank canvas of a chicken breast?

“Yeah, I don't know when it happened that suddenly chicken was often sold without the skin. But if you find yourself with the version that doesn't have any skin ... the thighs are a little more forgiving because they're a little fattier. But I cook them with lots of Dijon mustard and a little bit of flour, and kind of fry them up and then braise them and that makes this nice kind of thickened sauce that's tangy from the mustard.

Another one that I like … is I take chipotles just out of the can and marinate the thighs with those and some kumin and a little bit of honey and then roast it. It's sort of barbecue tasting and really pretty delicious, great with lime squeezed over it.

One of the things that was such a fun challenge about this book is taking apart some of the dishes that I've done forever and thought, what if you skipped some steps? How would that work out? And it often works out pretty well.”

Talk about suggestions for what to do with completely un-elevated ingredients, like a box of macaroni and cheese.

“Yeah, I call it ‘hackaroni and cheese.’ The one that my teenage son loved the most was the one that has corn, cilantro, and lime, which was this pasta that we used to make in the cafe at Chez Panisse. Of course, we used hand-cut noodles and had beautiful creme fraiche, but I was thinking, what if you just use a little less of the cheese stuff, and added corn and a little cream and lots of lime and cilantro and scallions? That one is really great. And by the way, you can take that leftover cheese packet if you didn't use the whole one, and sprinkling it over popcorn works really well.” 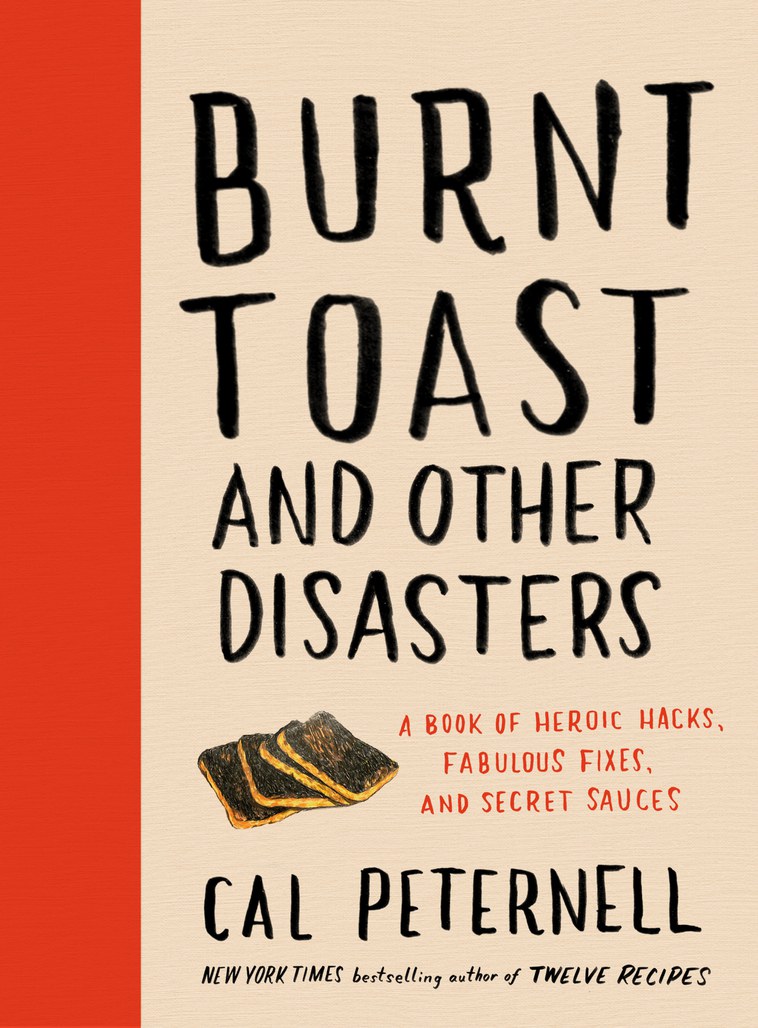 You can take inspiration from disappointment in chef Cal Peternell’s latest book, “Burnt Toast and Other Disasters.” Photo courtesy of HarperCollins.