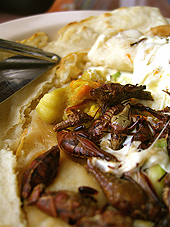 Extreme food correspondent Eddie Lin revisits his kitchen nightmares by eating Mexican delicacies, chapulines (grasshoppers--see above!) and huitlacoche (corn smut) in Orange County. OC Weekly columnist and author Gustavo Arellano accompanies Eddie on his culinary adventures by tasting chapulines at Oaxacan restaurant, El Fortin, where they sampled them toasted with chiles, salt and lime and in a quesadilla de chapulines. Huitlacoche comes from the Nahuatl word for raven excrement, is also known as Mexican truffle and is a fungus that grows on corn. Eddie and Gustavo ate huitlacoche at El Rincon Chilango. Eddie blogs for Deep End Dining and Gustavo writes the Ask A Mexican! column and is a food critic for the OC Weekly.

Music break: Tears Dry on Their Own by Amy Winehouse

The Year of Eating Dangerously

Tom Parker Bowles travels the world searching for rare delicacies and other foods that push the limit in The Year of Eating Dangerously . He is a food writer, television...

Chefs and foodies often play a game where they confess what their final meal on earth would be if they had a choice. In award-winning photographer Melanie Dunea's book, My...

Baker Clare Crespo's favorite day of the year is Halloween. Some ghoulishly tasty treats are eyeball, brain and bleeding heart cupcakes, as well as monster head potatoes and...

It's all about eating or getting eaten, as is the case for maggots and humans. Dr. Karen Dente discusses the benefits of free-range maggot therapy. Around since antiquity...

Where Flavor Was Born and New Scandinavian Cooking

Norwegian chef Andreas Viestad follows the spice trail along the Indian Ocean in Where Flavor Was Born . He is a food writer and television host of PBS' New Scandinavian...