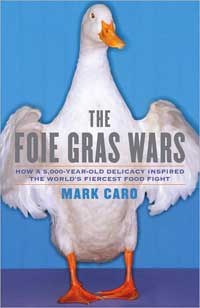 Mark Caro is the author of The Foie Gras Wars: How a 5,000 Year Old Delicacy Inspired the World's Greatest Food Fight.  In 2006 Chicago banned foie gras, the fattened goose or duck liver widely considered a delicacy among gourmets.  Many animal rights activists object to the way foie gras is produced.  The goose or duck is force-fed through a tube until the liver balloons in size - a process called gavage.  Many foie gras producers and consumers deny the level cruelty and pain involved in production, especially compared to the treatment of other types of livestock in the U.S.

In 2004, California Governor Arnold Schwarzenegger signed a law, effective 2012, that would make it illegal to make or sell foie gras.

The Evolution of the TV Cooking Show

Kathleen Collins is the author of Watching What We Eat: The Evolution of Television Cooking Shows . The very first cooking show on TV was I Love to Eat, hosted by culinary...

Jonathan Gold is the Pulitzer Prize-winning food critic for the L.A. Weekly. He recently feasted on goat in Koreatown. For a late night meal, he recommends Bulrocho ....

Under the Tuscan Gun

Debi Mazar and Gabriele Corcos host the web video series Under the Tuscan Gun . Debi is an American actress and her husband, Gabriele, is an Italian chef from Fiesole,...

Ruth Reichl is the Editor-In-Chief of Gourmet . Her latest book is Not Becoming My Mother and Other Things She Taught Me Along the Way...

Katie Stagliano is a ten-year old from Summerville, South Carolina. Last year, in a third grade project, she planted a cabbage seedling. That cabbage grew to 40-pounds....

Curtis Stone is an Australian chef, cookbook author and host of Take Home Chef on TLC. His latest book is Relaxed Cooking with Curtis Stone . Curtis also has a selection...

Mark Caro is the author of The Foie Gras Wars: How a 5,000 Year Old Delicacy Inspired the World's Greatest Food Fight . In 2006 Chicago banned foie gras, the fattened...

Chef Christophe Bernard, Academic Chair of the International Culinary School at the Art Institute of California, Los Angeles. His students will be making a...