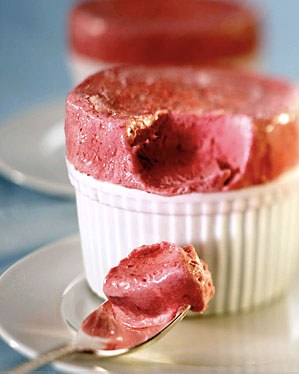 Russ Parsons is the Food Editor for The LA Times.  Frozen Souffles are a good alternative to ice cream.  To make a frozen souffle, you'll need to prep a souffle dish by lining it with wax paper.  Russ has a step-by-step guide.

Note: If the sugar crystallizes while cooking in step 3, try the step again in a clean saucepan and add one-fourth teaspoon corn syrup before cooking the sugar, but proceed with the rest of the step as written.

1. Cut a sheet of waxed paper that is long enough to fit around a 1-quart soufflé dish and fold it in lengthwise thirds to make a ribbon about 4 inches wide. Wrap this around the top of the dish to make a collar and tape the ends together. The collar should extend about 3 inches above the rim of the soufflé dish. Secure in place with a rubber band or tape and place the dish in the freezer to chill. Alternatively, prepare 8 (one-half cup) ramekins in a similar fashion, making sure the collars extend about 1 1/2 inches over the rim of the ramekins.

2. In a large saucepan, cook the blackberries and one-third cup sugar over medium heat until the berries soften and collapse, about 10 minutes. Puree the blackberries in a food mill, blender or food processor (strain the seeds if using a blender or processor); you should have about 2 cups. Stir in the blackberry liqueur and chill.

3. Heat remaining two-thirds cup sugar and the water in a small saucepan over medium heat to a temperature of 235 to 240 degrees, soft-ball stage, about 15 minutes. Stir the mixture until the sugar dissolves, then stop stirring but keep handy a brush moistened with water to wash down the sides of the pan should any sugar crystals form.

4. While the sugar mixture is cooking, beat the egg whites in an electric mixer to stiff peaks using the whisk attachment. With the mixer running, pour the sugar mixture into the egg whites down the side of the bowl in a slow, steady stream (avoid hitting the whisk with the sugar or it will spray over the bowl). When the hot sugar syrup first hits the whites, they will swell tremendously. Continue beating until the whites have cooled to room temperature, about 8 minutes.

5. In a large bowl, beat the whipping cream to soft peaks with a whisk or hand mixer.

6. Stir about one-third of the egg white mixture into the blackberry puree to lighten it. Then pour the blackberry mixture over the remaining egg whites and fold gently until well combined. These cooked egg whites are more stable than uncooked, but you still need to be careful not to deflate them.

7. Gently fold the whipping cream into the egg white mixture and spoon the mixture into the prepared soufflé dish or ramekins. It should come at least halfway up the paper collar. Smooth the top and freeze until very firm, at least 4 hours. If you freeze it overnight, transfer it to the refrigerator for at least 1 hour to soften before serving. If you make it more than 1 day in advance, once the mixture is frozen solid, cover it with plastic wrap and gently press the wrap against the surface of the soufflé.

8. When ready to serve, carefully remove the collar and serve the ramekins or cut the large soufflé into thin slices.

Singing for Your Kids

Good Food Producer Bob Carlson and his wife Tina, use songs at the dinner table, to help encourage their kids to try new things. Music Break: Tenors West by Jimmy...

Ani Phyo is the author or Ani's Raw Food Desserts: 85 Easy, Delectable Sweets and Treats .  Ani's version of a raw pie is the Strawberry Kream Cheezecake.

75 years at Third and Fairfax

(Photo Courtesy Kirk McKoy / LA Times) Russ Parsons is the Food Editor for The LA Times . Frozen Souffles are a good alternative to ice cream. To make a frozen...

Lisa Napoli, formerly of Public Radio's Marketplace, has been traveling to the Kingdom of Bhutan for last two years. She has been working to start a radio station in the...

Chip Brantley is the author of The Perfect Fruit: Good Breeding, Bad Seeds and the Hunt for the Elusive Pluot . Much of Chip's research took place at Zaiger Genetics ,...

Are Locavores Getting It Wrong?

James McWilliams is the author of Just Food: Where Locavores Get It Wrong and How We Can Truly Eat Responsibly . He argues that being a "locavore" will not help feed the...

Gustavo Arellano is the food writer for the OC Weekly . Taco trucks are a staple of Southern California food culture. One of the best Orange County taco trucks is...