Celia Sack is the owner of Omnivore Books in San Francisco, which sells new and antiquarian cookbooks. The store features a selection of Victorian-era cookbooks, 19th century agricultural guides and first editions from the legends of the food world, including Julia Child and James Beard.  Find images from some of the antiquarian cookbooks on our blog.

Ginger Cordial
In a large wide-necked bottle place one and a half ounces of pulverized ginger; infuse this in a quart of cognac, well corked, for from two to three days; stir now and then; strain through a flannel, and add a syrup of one pound of sugar cleared and refined in one gill of water; filter again, cork well. The English often add to the pulverized ginger one pound of mashed black or white currants that secures a very delicious taste.

From The Flowing Bowl: What and When to Drink by William Schmidt, NY: 1892

Season birds inside and out. Place a celery sprig and the bird's giblets in each. Season, cover breasts with bacon slices, and truss birds. Wrap in grape leaves and tie with twine. (If the leaves are old and bitter, scald them in boiling water.) Lay in roasting pan and bake in slow oven (300 degrees F.); or roast on spit before open fire.

From The European Cookbook for American Homes, by Bob, Cora & Rose Brown, NY: 1936

From The Book of Forty Puddings by Susan Anna Brown, NY: 1882 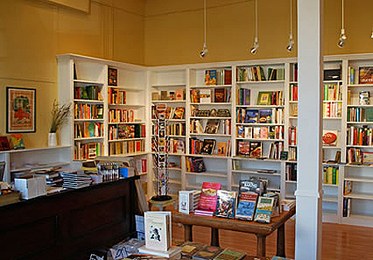 Celia Sack is the owner of Omnivore Books in San Francisco, which sells new and antiquarian cookbooks.

Teaching the Blind to Cook

David Kahn is Executive Director of Sustainable Habitats , a nonprofit which focuses on education of urban homesteading. He is also on the Board of Directors at Edendale...

Yvonne Savio is the program manager for the UC Cooperative Extension's Master Gardener Volunteer Program , which has helped almost 90,000 low-income people with their...

Pulitzer Prize-winning food writer Jonathan Gold of the L.A. Weekly takes us to Wolfgang's Steakhouse by Wolfgang Zweiner in Beverly Hills. This steakhouse was inspired by...

Olive Oil from Down Under

Jeremy Meltzer owns Yellingbo Olive Oil Company with his father, Howard, in the Yarra Valley of Southeast Australia. Aware that olive oil can spoil when it's exposed to...

Karen Page and Andrew Dornenburg are the authors of The Flavor Bible , a guide to hundreds of ingredients to inspire you in the kitchen. The book looks at how different...