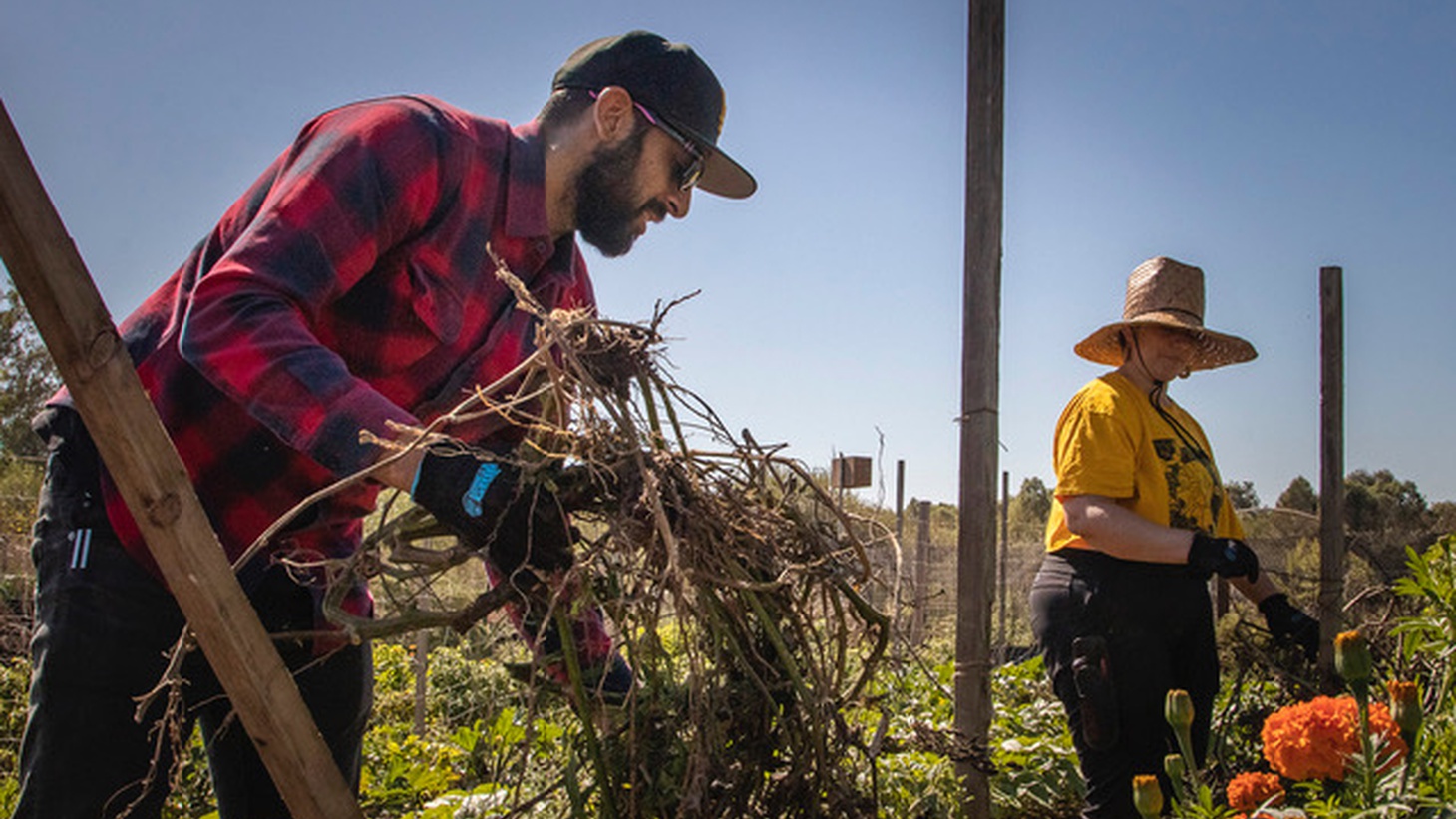 What do we do when faced with a climate crisis of epic proportions, one that is in lockstep with societies built on colonial power and its methods of economic extraction?

KCRW: From a climate perspective, where are we now?

Liz Carlisle: For over a decade, I have been really interested in talking to farmers who are trying to shift agriculture in the US from being a climate problem to being a climate solution. Globally, our food and agriculture system is responsible for something like a quarter to a third of greenhouse gas emissions. It's a huge climate problem. But plants are our allies in trying to respond to climate change. Plants can pull carbon and nitrogen out of the atmosphere and work with microbial communities in the soil to draw down some of that carbon and nitrogen to draw down greenhouse gas emissions.

There are a lot of farmers talking about this possibility right now. But a lot of researchers are debating just how much of a climate solution these kinds of regenerative agriculture approaches really are. In the last few years, I've been really struck by this wide range of estimates. Some researchers … say that 30 percent of human-caused emissions could be mitigated through regenerative agricultural approaches. But then you have other folks in the research community who say, “Let's not let the marketing get ahead of the science here, I'm not so sure we should think of regenerative agriculture as a climate solution.”

When I started researching this book a few years ago, that was really my question: How much of a climate solution is regenerative agriculture, really? And what I found was that it really depends on what you mean by regenerative agriculture. There are some farming approaches that are being presented or labeled as regenerative that don't really change the basic underlying logic of extractive agriculture. You can throw in a little no-till [farming] or maybe a little cover cropping, but you're basically still extracting nutrients out of soil.

But then there are other approaches to regenerative agriculture. And these are mostly coming from Indigenous communities and communities of color that actually have really, really deep roots [with] philosophies and practices that have been used for hundreds, and in some cases, thousands of years, and are really about shifting from an extractive mode of agriculture to these more reciprocal relationships with land, plants, and animals. And that's where we see the potential to really shift climate change.

This is an interesting interrogation between two wildly different communities of people.

Absolutely. I think we have to admit that some folks who are looking at regenerative agriculture are asking, “Can we continue business as usual? Can we continue the structure of the agricultural industry as it exists, the sort of land ownership patterns that already exist, and somehow not have a climate crisis?” And the answer to that is no.

So that's where this confrontation happens, and we really have to ask these questions. Where does extractive agriculture come from? Why do we have an agriculture that moves all this carbon and nitrogen up into the atmosphere? And it is because it's part of this larger extractive history of colonization on this continent? If we don't face that, and if we don't make people whole, there's no way we're going to make the land whole.

There are two areas that are struggling to get traction. You have regenerative agriculture on one side, and then racial and land justice on the other side. You met five women of color who are on the front lines of regenerative agriculture. When you were in the midst of your research, did you have a moment that gave you this essential insight?

A moment that really sticks with me is when I was speaking with Latrice Tatsey, who is an ecologist who studies buffalo restoration. She's a member of the Blackfeet Nation in northwestern Montana and she's interested in how bringing bison relatives back to their homelands might impact soil carbon. She's from a ranching family and her family manages cattle, and she's interested in the difference between buffalo grazing and cattle grazing. But she's also interested in what Indigenous people who have adopted cattle raising can learn from having bison on the landscape, observing their grazing patterns, and renewing this relationship that Blackfeet people and bison have had.

I was talking to her as a regenerative grazing expert. And like a lot of other regenerative grazing experts I've spoken with, she told me that we can really learn from how bison move across the landscape, that they graze great distances, and they graze selectively, so that they're grazing down vegetation, but then they're stimulating it to regrow. And they're not coming back to that same area for a while. So it has time to recover. And she was describing the ecology of all of this. She said that it's not just about understanding native herbivores grazing as some kind of an abstract model to guide how we're going to graze cattle. She said, “It's actually about bringing the bison home themselves home to this landscape, because they are our teacher. When we see them grazing this landscape in this way, for our people, this has always been our guide for how to live in balance with these lands.”

That sense of deep relationship with land and with plants and animals, and that reciprocal relationship, was what I really got from that conversation with Latrice.

Could you share the work that Aidee Guzman has been doing?

When I was at Berkeley, Aidee Guzman enrolled as a graduate student. She was from the Central Valley and had grown up in a farm-worker family. She was really interested in the connection between above-ground biodiversity – the diversity of crops — and below-ground biodiversity, the diversity in the soil microbial community that drives things like soil carbon sequestration and the ability of soils to store more water so that farms can get through drought.

As a graduate student at Berkeley, Guzman needed to find a series of farms that had a lot of above-ground biodiversity in the Central Valley. And other folks in the research community told her she’d have a hard time because it's all monoculture out there. They asked, “How are you possibly going to find a study where you can compare diverse farms and monoculture farms?”

Because she grew up connected to a community of immigrant farmers that a lot of folks in the research community sort of didn't see, she put together this incredible, unprecedented study, working mostly with immigrant farmers in the Central Valley, that demonstrated that people with a lot of above-ground biodiversity growing polycultures, which are culturally traditional in these immigrant families, stimulated a high degree of biodiversity below ground. Specifically, she was looking at arbuscular mycorrhizal fungi, and she found that there were two times as many types of them on these polyculture farms. 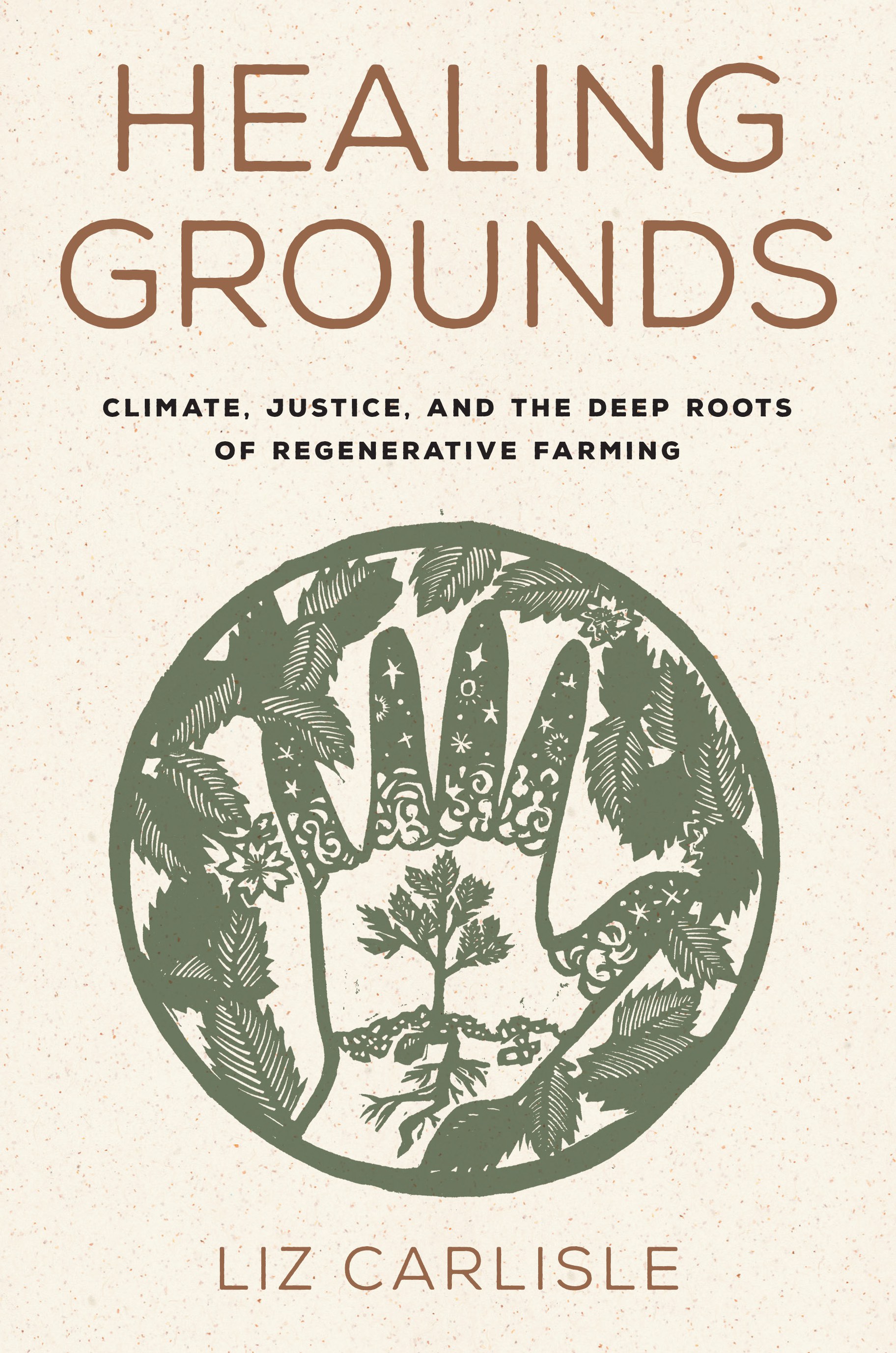 Neil is the co-director of Minnow. Can you tell us what you do?

Neil Thapar: Minnow is an organization that I co-founded a couple of years ago with collaborator and farmer Mai Nguyen. Our purpose is to restore secure land tenure for farmers of color, and indigenous communities in California. Our current conception of land ownership is influenced so heavily by the current economic and legal system, which really prioritizes private ownership of land. But once we look back a little bit further, we see that the weight of history actually prioritizes and was built on a communal stewardship or relationship to land. And so our work is to reach back and try to adapt those models of land stewardship to a modern legal, economic, and social system that we live in so that we have a possibility of a regenerative or reimagined native agricultural system going forward.

Land as property is one of those divine rights that we think of. I grew up thinking about it. But being born here to immigrant parents, I had the opportunity to live back in India where my parents are from, and I had the opportunity to see that this wasn't the way that everyone conceived of their relationship to land. And that was one of the inspirations for Minnow — once we're able to see something different, it unlocks our imagination of what's possible.

Do you have a concrete example of a successful project?

The project that I want to highlight is our work with a worker-owned farm in San Diego called Pixca Farm. They are growing on a really small piece of property right now, but they're three people who recognize that their labor on the land is something that they should control. And that shouldn't be controlled by someone else. So they've organized themselves as worker-owners of their farm business. Because of that, they are growing foods and feel accountable to the community that they are growing for, which is something that we don't see in the industrial agricultural system, where ownership is so removed from the land itself.

In addition to growing food for their communities, they're also looking to expand their acreage to be able to grow. And what we recognize, too, is that we also need to do that in a way that's respectful of Indigenous communities whose ancestral territories we are all on. And so our work is to facilitate the connection between the Pixca farm worker-owners, and the Kumeyaay tribe in San Diego.

Liz, after reading your book, I think about how COVID has shown how much self interest can be pitted against cooperative solutions. Why do you think so many people and organizations are so dismissive of cooperative economic models?

Carlisle: I think Neil put it really well, that there's this kind of socialization, this really deep education that many of us who've lived our whole lives in the United States have gotten, that just says it's not possible. When people have the opportunity to experience for themselves any kind of cooperative formation that is working, that is providing mutual benefits to the folks who are involved, that then leads to this sense of imagination about what's possible. I think it's really important to resist those discouraging words, and to try to give ourselves the opportunity to experience cooperation at whatever scale it's accessible so we can continue to expand our imagination.