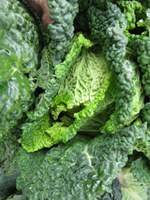 Campanile chef Mark Peel drives to the Santa Monica Farmers Market each week to select produce for his restaurant.  He loves the produce this time of year and uses it to make lots of soups.  Cabbage soup is one of his favorites. He likes the Savoy variety, with its round head and crinkly leaves. Mark sautes bacon slices and a half head of thinly sliced cabbage in olive oil. After adding a 16-oz can of chicken broth and enough water to make 2 quarts, he simmers the mixture for a half-hour with a few sliced carrots and the heart of the celery with the leaves. He then adds salt and pepper. The soup looks a bit like a minestrone.  There are many recipes available to make a simple leek and potato soup. The farmers market has long-neck leeks with a foot or more of usable whites.  Use a Russet potato for the best starchy consistency. 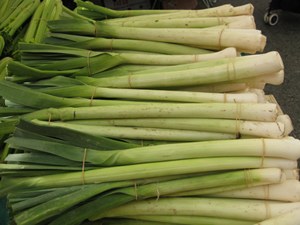 Evan visited the Hollywood Farmers Market, where she visited with an herb seller from ABC Rhubarb. Lily Balthazar is featuring watercress, and dandelion greens. She also carries rue, a non-culinary herb which wards of flying objects in the kitchen. ABC also has oyster mushrooms, which are great baked in parchment paper with some chopped herbs (350° for 30 minutes).  These go great in a rice pilaf or make a nice side dish.

Brian Gould is an agricultural economist at the University of Wisconsin. His website, Understanding Dairy Markets , offers up-to-date information on dairy prices and...

Helena Echlin is a columnist at Chow.com where she advises readers about etiquette. Send her your question . Music break: Legend of the Rain by Medeski, Martin...

Jesse Cool owns several cafes in Northern California including Flea St. Cafe and Cool Cafe . Her book is Simply Organic : A Cookbook for Sustainable, Seasonal, and...

Campanile chef Mark Peel drives to the Santa Monica Farmers Market each week to select produce for his restaurant. He loves the produce this time of year and uses it to...

Kogi BBQ is a Korean Taco truck that parks in various locations around Los Angeles. To find out where it is, follow it on Twitter . Deep End Diner and frequent Good Food...

Restaurants and the Recession

Lesley Balla is the editor of the online newsletter Tasting Table LA , which launches in February. Support L.A. area restaurants by dining out during DineLA's restaurant...

Grace Young is the author of The Breath of a Wok : Unlocking the Spirit of Chinese Wok Cooking Through Recipes and Lore. In Chinese culture, the Kitchen God is the...

Jonathan Gold traveled to South El Monte, where he discovered Pho Town, a stretch of Garvey Avenue loaded with Pho restaurants. Jonathan's pick for the best of the bunch is...