Grace Young is the author of The Breath of a Wok: Unlocking the Spirit of Chinese Wok Cooking Through Recipes and Lore.

In Chinese culture, the Kitchen God is the official guardian of the family.  Find out more about the ritual surrounding Chinese New Year and the Kitchen God at Grace's website.

Grace Young's kitchen has four Kitchen Gods: two statues, the photo, and the plaque which displays the four Chinese characters "Reserve Fortune Kitchen God." Traditionally, families only place one Kitchen God at their altar.  It is traditional to make an offering at Chinese New Year's of a plate of oranges or tangerines as a sweet bribe for the Kitchen God. 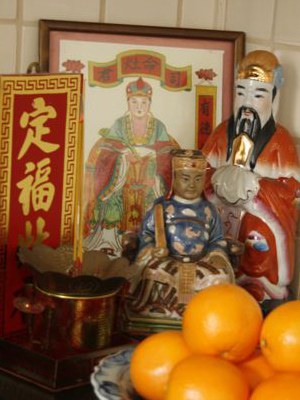 Jean Yueh's Shanghai-Style Shrimp
Cookbook author and teacher Jean Yueh advises that the shrimp can be made ahead, transferred to a platter, and served at room temperature.

1. Using kitchen shears, cut through the shrimp shells two-thirds of the length down the back of the shrimp. Remove the legs and devein the shrimp, leaving the shells and tails on. Rinse the unpeeled shrimp, drain, and set on several sheets of paper towels. With more paper towels, pat the shrimp dry. In a small bowl combine the soy sauce and vinegar.

2. Heat a 14-inch flat-bottomed wok over high heat until a bead of water vaporizes within 1 to 2 seconds of contact. Swirl in the vegetable oil, add the ginger and scallions, and stir-fry 30 seconds or until aromatic. Add the shrimp and stir-fry 30 seconds. Add the sherry and stir-fry a few seconds. Swirl in the soy sauce mixture and sprinkle in the sugar. Stir-fry the shrimp 1 to 2 minutes or until the sauce is distributed and the shrimp are just cooked. Remove from the heat. Stir in the sesame oil if desired. Serve immediately or at room temperature. Serves 4 as part of a multicourse meal.

From The Breath of a Wok

Brian Gould is an agricultural economist at the University of Wisconsin. His website, Understanding Dairy Markets , offers up-to-date information on dairy prices and...

Helena Echlin is a columnist at Chow.com where she advises readers about etiquette. Send her your question . Music break: Legend of the Rain by Medeski, Martin...

Jesse Cool owns several cafes in Northern California including Flea St. Cafe and Cool Cafe . Her book is Simply Organic : A Cookbook for Sustainable, Seasonal, and...

Campanile chef Mark Peel drives to the Santa Monica Farmers Market each week to select produce for his restaurant. He loves the produce this time of year and uses it to...

Kogi BBQ is a Korean Taco truck that parks in various locations around Los Angeles. To find out where it is, follow it on Twitter . Deep End Diner and frequent Good Food...

Restaurants and the Recession

Lesley Balla is the editor of the online newsletter Tasting Table LA , which launches in February. Support L.A. area restaurants by dining out during DineLA's restaurant...

Grace Young is the author of The Breath of a Wok : Unlocking the Spirit of Chinese Wok Cooking Through Recipes and Lore. In Chinese culture, the Kitchen God is the...

Jonathan Gold traveled to South El Monte, where he discovered Pho Town, a stretch of Garvey Avenue loaded with Pho restaurants. Jonathan's pick for the best of the bunch is...