Zoe Nathan and Josh Loeb are the owners of Rustic Canyon restaurant on Wilshire near 11th Street and the newly opened bakery/cafe, Huckleberry.  Zoe

and Josh recently got married and instead of gifts they asked for donations to their garden fund. With that money they hired Jimmy Williams of Hayground Organics in Los Angeles. Jimmy ripped out the front yard and planted an orchard of fruit trees. In the backyard Zoe and Josh have blueberries, strawberries, corn, lettuces, peppers and many other things in their small area.  Right now Zoe is looking for radishes to make a simple butter and radish sandwich. She uses a baguette and butters it with Plugra butter. The radishes are sliced thinly, placed on the bread and topped with fluer de sel salt. 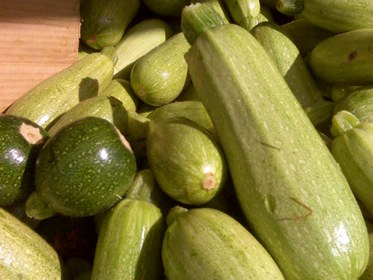 Summer squash is just cropping up in the markets this week. Look for the regular green zucchini or the pale green Lebanese zucchini, patty pan or any of the other varieties.  Cliff Wright is a cookbook author. His most recent book is Bake Until Bubbly: The Ultimate Casserole Cookbook.  Here is his recipe for stuffed zucchini:

In the Arab world, the stuffing of vegetables has its roots in the cookery of the early Islamic empire of the Abbasids in Baghdad, possibly learned from the Persians.  Ottoman chefs perfected the stuffing of vegetables, and today nearly everything that can be stuffed is stuffed from artichokes to zucchini.  This version of stuffed zucchini, called kūsā maḥshī is one way they do it in the Levant.  Sometimes the stuffing is made only with rice.  Another variation made with stuffed zucchini is to poach them in yogurt.

1. In a large skillet, heat 2 tablespoons olive oil over medium-high heat, then cook the ground lamb, stirring occasionally, with the bahārāt, allspice, cinnamon, salt, and pepper, about 8 minutes.  Transfer to a large bowl, and toss with the drained rice, onions, parsley, 3 tablespoons of the mint, and 1 1/2 tablespoons lemon juice, and season with salt.
2. Hollow out the zucchini using a zucchini corer, making sure you do so carefully so as not to puncture the skin.  (Save the zucchini pulp, if desired, for making zucchini fritters).  Stuff the zucchini, but not too tightly as the rice will expand while cooking.
3. Cover the bottom of a 10-inch stew pot with a drizzle of the remaining olive oil and pack the stuffed zucchini tightly and neatly in the stew pot in layers.  Sprinkle each layer with some of the remaining mint and lemon juice, salt, and a light drizzle of olive oil.  Finish the top layer with the olive oil, mint, and lemon juice and dash of salt.  Invert a heavy plate on top of the zucchini to press them down.
4. Cover and cook over medium heat for 30 minutes.  Reduce the heat to low and cook until the stuffed zucchini are tender, 2 to 3 hours.  Test for doneness after 2 hours by tasting one of the ends of the zucchini.  If the rice is cooked, it is done, otherwise continue cooking.

Note: The Arabic spice mix called bahārāt is found, with that name, in the spice sections of some supermarkets.  You can make your own by grinding and blending together ¼ cup black peppercorns, ¼ cup allspice berries, 2 teaspoons ground cinnamon, 1 teaspoon freshly grated nutmeg and pinches to ¼ teaspoon additions of any of the following: paprika, coriander seeds, cassia bark, sumac, nutmeg, cumin seeds, or cardamom seeds.

Charles "Chip" Ransler is the Chief Strategy Officer for Husk Power Systems , which provides electricity to rural India through the use of rice husks. The husks are a...

Who Is Making Us Fat?

For more than 20 years, Hank Cardello was an executive at Coca Cola, General Mills and Michelob. He currently chairs the Global Obesity Business Forum at UNC Chapel...

Zoe Nathan and Josh Loeb are the owners of Rustic Canyon restaurant on Wilshire near 11th Street and the newly opened bakery/cafe, Huckleberry . Zoe and Josh recently...

Jonathan Gold is the Pulitzer-prize winning food writer for the L.A. Weekly . Bottega Louie is a large marketplace and restaurant in Downtown L.A. Jonathan liked the...

David Lebovitz is an ex-pat living in Paris. He is the former pastry chef at Chez Panisse and the author of The Sweet Life in Paris: Delicious Adventures in the World's...

Mark Olive is one of Australia's premier Aboriginal chefs. He is from the Bundjalung tribe and grew up in the Wollongong region of Australia. Mark stars in the show The...